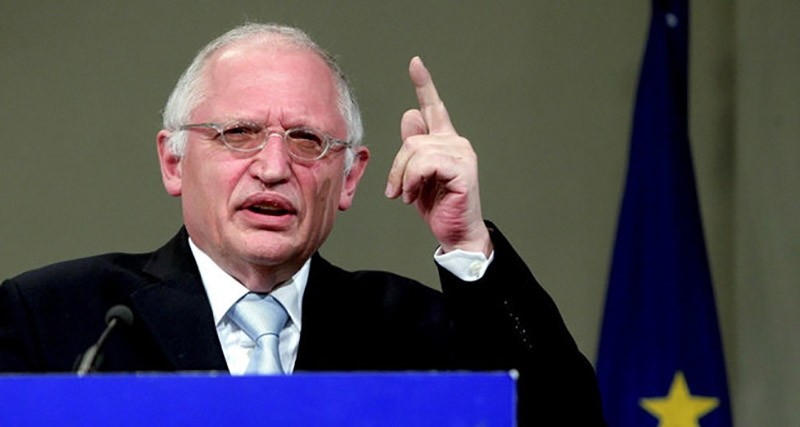 The Former European Commissioner for Enlargement Günter Verheugen was a guest on the German political talk show "Anne Will", during which he criticized Europe's stance against Turkey.

On the TV show, which aired on German state broadcaster ARD on March 5, Verheugen pointed out that Turkey was promised EU accession and that this promise has not been kept for 60 years.

"Last year, an agreement with Turkey was signed, which intended to accelerate EU accession negotiations. In return, Turkey is doing the dirty work for us and keeps refugees out of Germany and Europe, "Verheugen said.

"Our policy towards Turkey is dishonest. They have a decade-long promise, but all they hear is 'we don't want you' from France, Germany, Austria and the Netherlands. Then we wonder why Turkey's reaction is like it is now," he added.

The German Minister of Justice Heiko Maas, left-wing delegate Sevim Dağdelen and fugitive journalist Can Dündar were also guests on the show, and they harshly criticized Turkey and President Recep Tayyip Erdoğan.

Dağdelen asked Maas for a general ban on Turkish politicians in Germany by giving the decisions of the Netherlands and Austria as examples.

Regarding the bans on ministers, the vice chair of the Union of European Turkish Democrats (UETD) Fatih Zingal pointed out that the German government in a way exuded hypocrisy by allowing a pro-PKK HDP deputy, Tuğba Hezer Öztürk who had participated in PKK-terrorists' funerals, to hold a "no" campaign in the country.

German-Turkish relations have been strained over the past few weeks, after a planned and previously announced meeting of Justice Minister Bekir Bozdağ with Turkish citizens in the German state of Baden-Württemberg was cancelled only a few hours before the event due to alleged security reasons.

German media reported that numerous German politicians demanded to prevent the appearance of Bozdağ as well as other Turkish ministers beforehand.

In response to the ban on his meeting, Justice Minister Bekir Bozdağ canceled his entire trip to Germany, where a meeting with his German counterpart Heiko Maas was also planned.

Bozdağ was not the only Turkish minister whose program was canceled by German authorities. An official from the city of Cologne said a March 5 event, where Economy Minister Nihat Zeybekçi was to hold a rally through the Union of European Turkish Democrats (UETD) was also canceled.

Following the incident, the Turkish Foreign Ministry summoned German Ambassador to Ankara Martin Erdmann, and he was received by the deputy secretary responsible for European affairs, Mehmet Kemal Bozay.