Regardless of election outcome, Wilders has already redefined Dutch politics 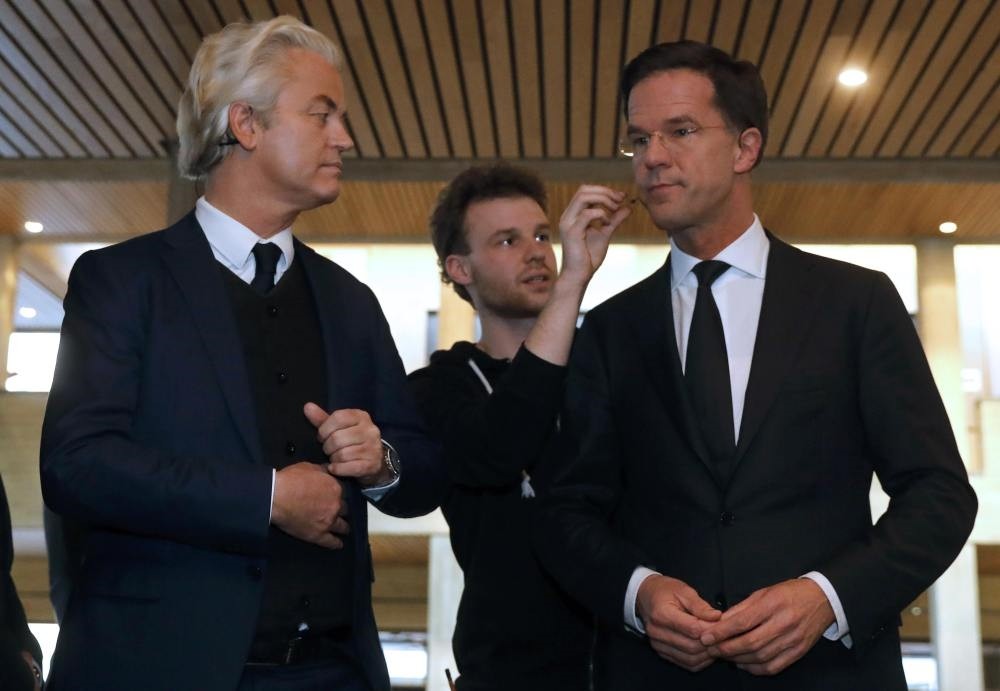 Ahead of today's parliamentary election in the Netherlands, a country once acknowledged for being over-permissive and a pioneer of liberal values, anti-Islam Wilders has already won the race, by internalizing his views with some help from his opponent and the current PM Mark Rutte, creating a new 'norm' in the Netherlands

The Dutch public will cast their votes today as they elect the new members of the 150-seat parliament in a political reflection of the rising far-right in Dutch politics which has reared its head in recent years, revealed in a recent row with Turkey over the controversial deportation of the Turkish ministerial convoy from the country last week. According to recent polls, the competition is cut-throat between current Prime Minister Mark Rutte's (R) center-right People's Party for Freedom and Democracy (VVD) and the far-right Party for Freedom (PVV), led by anti-Islam populist Geert Wilders (L). Despite showing a lead in the polls over a long period of time, the latest poll conducted by pollster Maurice De Hond revealed that the VVD would take 27 seats while the PVV would take 24.

Dutch Polling Indicator, which combines the results of multiple Dutch polls, also revealed that the PVV has fallen behind the VVD and is now only expected to win a total of 22 seats in the Dutch Parliament. It seems winning the elections will give Widers nothing more than "winner status" alone, as prominent parties announced previously that they will not form a coalition government with the far-right PVV. However, taking into consideration that there has been no outright one-party majority in the Dutch parliament since 1894 and that it is currently hosting a dozen more political parties compared to the PVV, a win for Wilders may give him the chance to form a government consisting of several minor parties.

However, regardless of possible post-election scenarios, coalition negotiations and the results of the ballot boxes, the attitudes of the Dutch government and local police in the recent row with Turkey have revealed that the anti-Islam leader has already won the election, since he imposed his views on his main opponent and prime minister of the VVD-Labour Party government, Mark Rutte, in a move that was once seen as "very unusual" for a country like the Netherlands, which was a pioneer of European values such as the freedom of speech and freedom of expression.

Turan Atmaca, the Netherlands' head of the Union of European Turkish Democrats (UETD) told Daily Sabah that the Dutch government's attitude comes from the new political atmosphere in the country. Atmaca said that even though it started as election discourse, the issue quickly got out of control with the deportation of a Turkish minister. He further added that the row will not likely end after the elections.

"Wilders was far ahead in the election polls a couple of months ago. After Rutte understood that clinging onto far-right discourse would boost his votes, he started to use it often," he said.

Likewise, according to a recent poll conducted by Daily Sabah via Twitter, 76 percent of voters think that the rise of fascism in Holland will not end after the elections, while 24 percent think that it is not a permanent situation.Even though the Dutch government's implementation of nondemocratic policies and controversial discourse was revealed after the recent crisis with Turkey, it is far more than an abruptly-developed attitude and is rather following in the footsteps of politics as they have played out over the last few years.

In one example of this in September last year, Wilders said he did not want "even one more Turk" to come into his country - one of his most popular comments which he has long been repeating - calling on the Dutch to close their doors to Turkish citizens in a speech he gave in the Dutch parliament.

While this might normally be regarded as another "Wilders being Wilders" moment, what makes the case unusual is the support given to him by a prominent mainstream politician Halbe Zijlstra, chairman of the ruling VVD in the House of Representatives. He supported Wilders's comments and divided Turks in the Netherlands into two groups, good and evil, saying that "Turks should go back to Turkey if they see Erdoğan as their leader."

It was just one of the many moments that signal a "new political norm" in the Netherlands. Surely suggestions such as those made by Wilders would have received a reaction from mainstream politicians - if it had been a decade ago - in the country that was labeled the stronghold of the liberal worldview in the EU.

However, now, a photo taken in Rotterdam during the protest against the Dutch ban on Turkish ministers speaks louder than words,showing a man who was injured after a dog bit his leg for a few seconds before he lay on the ground, capturing the image of the new era in Dutch politics. The new Netherlands also includes the deportation of a minister of a NATO-ally and EU applicant, the deployment of heavily-armed special forces units granted permission to "shoot if necessary" and the release of K-9 dogs on peaceful protesters by police officers wearing riot suits who were seen charging on the crowds on horseback in what is the "new norm" of the Netherlands which is being taken captive under Wilders's policies.

It also gives a clear indication of where Dutch politics are headed, especially if one takes into consideration the fact that the policies of politicians such as Wilders started to be internalized instead of being alienated.

"The content of the speeches and statements from Turkish politicians, notably President Erdoğan, showed that the issue is not going to 'quietly pass over'," Emre Gönen, an academic at Bilgi University who specializes in EU politics, told to Daily Sabah.

"It is clear that the Dutch government escalated the tension for the election but the Turkish government is not going to be outdone. So I don't expect any immediate recovery in bilateral relations after the elections," Gönen added.

The 55-year-old politician has led the VVD since 2006 and has been the prime minister of the Netherlands since October 2010.

After the latest general election in September 2012, Rutte, whose party VVD won the majority vote, created a coalition with the runner-up Labour Party (PvdA) and a new VVD-PvdA centrist government emerged on November 5, 2012, comprised of Rutte as prime minister, along with seven VVD ministers and six PvdA ministers. Rutte is regarded as the first liberal to take office since 1918 and the first elected prime minister who is neither a Christian-democrat nor a socialist.

Despite having previously pledged not to form a coalition with the anti-Islamic Geert Wilders, Rutte worked alongside Wilders, who helped him establish a government after the 2010 elections, agreeing to support the government while taking no seats in Cabinet. However, Party for Freedom (PVV) leader Wilders withdrew his party's support on April 2012, claiming the budget would hurt economic growth, which led to the dissolution of the government.

Rutte remains committed to the EU, presenting himself as the only serious alternative to Geert Wilders. The latest poll revealed that Prime Minister Rutte's VVD party is on track to win 27 seats in the 150-seat parliament with 18 percent of the vote.

Mark Rutte is unmarried and a member of the Protestant Church in the Netherlands.

Geert Wilders was born in the southeastern Dutch city of Venlo in 1963 and entered politics at 28 years of age in 1990, serving as parliamentary assistant to Frits Bolkestein, then leader of the VVD. In 1997, he was elected to the Municipal Council of Utrecht for his party, going on to be elected as a member of Dutch Parliament just one year later.

Prior to his appointment as public spokesman for the VVD in 2002, he had drawn little attention. However, his new post has led him to become more well-known thanks to his outspoken criticism of Islam. Following his controversial statements against Islam, tensions developed within the party, as Wilders stationed himself to the right of most members. He also refused to endorse the party's position regarding Turkey's negotiations for EU accession.

These tensions resulted in his expulsion from the VVD, of which he had been a member since 1989. In September 2004, Wilders formed his own political party, the Party for Freedom (PVV).

According to the latest polls, Wilders's anti-Islamic PVV was in second place with 16 percent, and is set to win 24 seats. Even though Wilders will surpass Rutte's VVD and come in first place, he is likely to be sidelined and will not become prime minister as other major parties have publicly declared that it is highly unlikely they would form a government with him.

Often referred to as the "Dutch Donald Trump," Wilders does not have much in common with the U.S. president aside from physical traits - blonde hair - and having a wife of Eastern-European origin, aside from also strongly opposing immigrants in their own countries. Most basically, Wilders is not an advocate of conservative values, he is an agnostic who prefers to call himself a liberal instead of a conservative. Wilders even supports gay rights, one of the main issues causing conflict between liberals and conservatives in many Western countries, since he regards the issue as part of a larger struggle to defend the national values against Islam, in a country that was once proud to have been the first in the world to establish the marriage equality law. Such liberal views on marriage are the red line between Wilders and Trump, as well as politicians Marine Le Pen and Matteo Salvini, prominent far-right party leaders of France and Italy.

Wilders, now 58, is the third-longest sitting member in the Dutch parliament's Lower House. He considers himself a right-wing liberal and cites former British Prime Minister Margaret Thatcher as his greatest political role model.