We are against far-right politics, not Europeans, says President Erdoğan 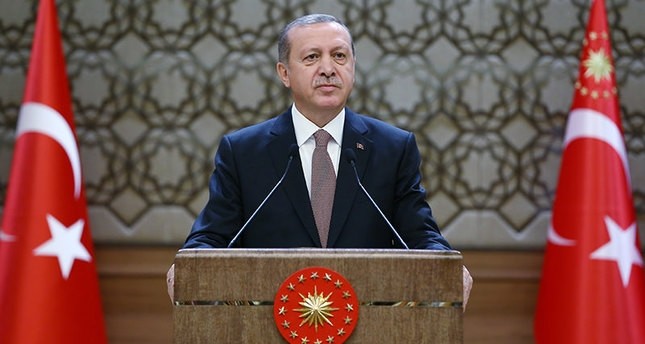 by Daily Sabah Mar 15, 2017 12:00 am
President Recep Tayyip Erdoğan said Wednesday that Turkey has no problem with the people of European countries and criticized EU politicians for the problem of fearing anything that is non-European. "We have no enmity toward Germany, Austria, the Netherlands, Belgium or France. We certainly have no enmity toward other European countries. We are one of the first countries that applied for EU membership. It is the shame of Europe that they have given visa liberation to states outside of the continent while they are trying to close all doors on Turkey," Erdoğan said amid the recent row between the Dutch and Turkish government over the deportation of Turkey's Family and Social Policies Minister Fatma Betül Sayan Kaya from Rotterdam early Sunday.

Late Sunday, Dutch police detained Minister Kaya in Rotterdam and deported her to Germany after declaring her an "undesirable alien" following her interception by Dutch police while entering the country, where she was scheduled to address the Turkish community.

"The EU is moving toward drowning in its own fears. The fear of Turks, fear of Islam has hit the ceiling. They have become enemies to everything that is not from them, they are even afraid of the refugees who are seeking asylum because they have nothing else left to hold onto in life," President Erdoğan said, during a speech at a rally in Turkey's central Afyon province, emphasizing the increase in far-right politics among EU states.

He also expressed his annoyance regarding Rotterdam Mayor Ahmed Aboutaleb's attitude during Minister Kaya's deportation, as it was revealed that Aboutaleb gave special forces the authority to ''shoot if necessary,'' as they engaged against protesters. "They gave shooting permission to their police. There was a female minister and her unarmed convoy that consisted of a few people. How it can be possible to give the permission to 'shoot if necessary' in such situation," he said.

Aboutaleb said on Monday that he deployed a heavily-armed special force unit with permission to ''shoot if necessary'' on Saturday as Turkish protesters gathered around the Turkish consulate after Minister Kaya was barred from entering the consulate building. "We decided to deploy a special unit so that we would have the upper hand if anything was to happen. We also gave them the authority to shoot in case of need,'' Aboutaleb said.

Erdoğan added that the EU has no right to give anyone a lesson about democracy, law, freedom and justice. "They emptied out the EU with their anti-Turkey manner. Look at the U.K., they put the Brexit to referendum and decided to leave. The EU has no right to teach a lesson to anyone. Fascism is making the rounds on European streets," he said.

President Erdoğan yesterday also slammed the Netherlands' undemocratic treatment of the Turkish ministerial convoy in the Dutch city of Rotterdam by reminding the country of its role in the Srebrenica genocide of Bosniaks, or Muslim Bosnians, in 1995. He also harshly criticized German Chancellor Angela Merkel over Germany's "support of terror," saying, "We have sent her more than 4,500 files on terrorists and not a single step has been taken [to extradite them] so far. Germany and Chancellor Merkel side with terror," Erdoğan said.

Meanwhile, Prime Minister Binali Yıldırım also said yesterday that it is "not the people of Germany and the Netherlands," but rather enmity against Turkey is a product of EU politicians.

"I condemn the politicians of Germany and the Netherlands. Actually, most of the population there is not against Turkey; they are the friends of Turkey," Yıldırım said during a rally in northeastern Ardahan province.

Former European Commissioner for Enlargement Günter Verheugen criticized Europe's stance against Turkey while appearing as a guest on the German political talk show "Anne Will."

On the TV show, which aired on German state broadcaster ARD on March 5, Verheugen pointed out that Turkey was promised EU accession and that the promise has not been kept for 60 years.

"Last year, an agreement with Turkey was signed, which intended to accelerate EU accession negotiations. In return, Turkey is doing the dirty work for us and keeps refugees out of Germany and Europe, " Verheugen said.

"Our policy towards Turkey is dishonest. They have a decade-long promise, but all they hear is 'we don't want you' from France, Germany, Austria and the Netherlands. Then we wonder why Turkey's reaction is like it is now," he added.
Last Update: Mar 15, 2017 7:48 pm
RELATED TOPICS