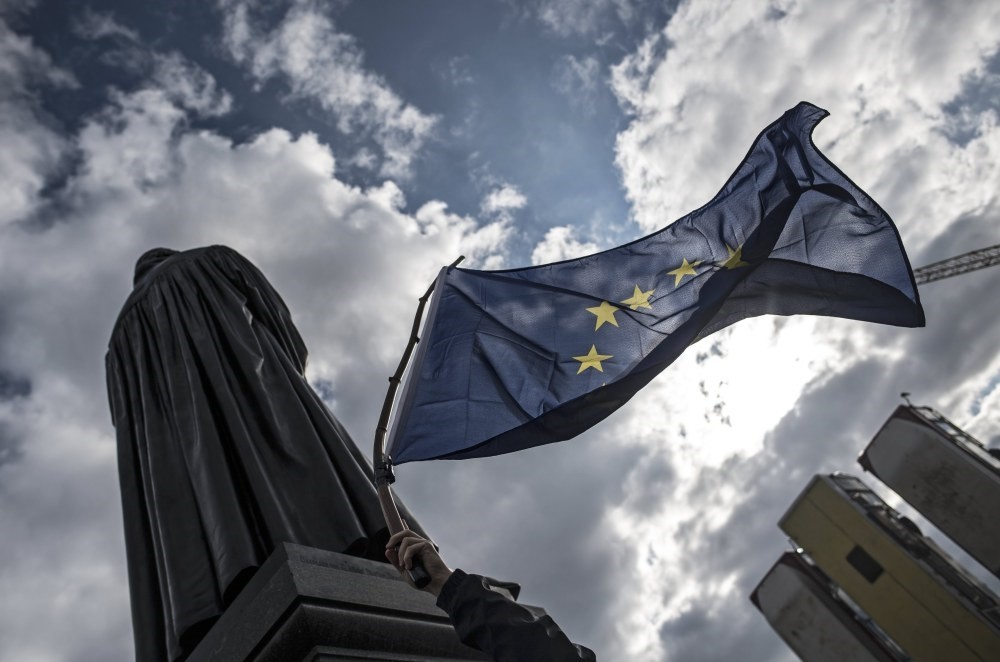 A man waves an EU flag in front of the Martin Luthger Statue during a pro-European Union rally called 'Pulse of Europe' at Neumarkt square in Dresden, Germany March 12.
by Ali Ünal Mar 16, 2017 12:00 am

While the European Union's fate remains unclear with the Brexit process and the rise of far-right movements across the continent that are skeptic of the bloc, some experts argue that a multi-speed Europe could be a solution for stalled Turkish-EU relations

Even though Turkey is a candidate for EU membership and accession talks still continue, Brexit and the growing euroskeptic far-right political wave rippling across Europe has turned the entire process of EU accession into a never-ending story overshadowed by clouds of suspicion regarding the fate of the EU. Thus, the question of whether Turkey and the EU will be able to reach an intermediate solution of the same multi-speed velocity we have seen in Europe is a reasonable one.

Speaking to the Ankara Bureau Chief for the news outlets in Ankara on March 13, Minister for EU Affairs and Chief Negotiator Ömer Çelik said the Brexit and rising far-right rhetoric across Europe have changed the DNA of the EU. He predicts that the union has to adjust itself to these changes, saying, "The EU cannot continue after 2017 as if nothing happened. Thus, we call on European leaders to gather at a summit to discuss the future of Europe.'' Çelik went on to say: ''For Turkey, new opportunities may be found after 2017. The multi-speed Europe might be on our agenda.''

The minister also stressed that it is too early to conclusively say that Turkey-EU relations are deadlocked, noting, "Yes, there is a crisis in Turkish-EU relations and far-right European politicians are trying to turn this crisis into a bad break-up. However, this break up would only serve neo-fascist interests and we should not let this happen."

Turkey applied for EU membership in 1987 and accession talks began in 2005. However, negotiations reached a stalemate in 2007. The German and French governments have opposed full EU membership for Turkey and the Greek Cypriot administration still blocks five negotiation chapters. In order to become a full EU member, Turkey has to successfully conclude negotiations with the EU regarding 35 policy chapters. But this possibility seems to have become a remote one, given the current political climate in Europe.

Commenting on this issue, Dr. Mehmet Uğur Ekinci from the Foundation for Political, Economic and Social Research (SETA) said that prior to having discussions about multi-speed Europe and other options regarding Turkish-EU relations, we must first know what decisions Europe will make regarding the future of the EU, saying: ''A rising far right is a cold fact of Europe and this worrisome trend feeds Turkophobia in Europe. First, we need to see how they will determine the fate of EU. In part, because it's not only Turkey's problem but also a problem for other candidate countries,'' Ekinci said. ''Even the Western Balkan countries, which seem to be closest to the EU at the moment, don't know what will happen to the EU in the future. The EU cannot offer future perspective to any country in such an environment.'' he added.

Regarding the future of Turkish-EU relations Georgi Gotev, a senior editor of EurActiv.com asserted that Turkey may share the same fate with the U.K. ''Since the Brexit referendum, it has become clear to me that the future EU could be one in which the U.K. and Turkey play a similar role. This basically means a very close relationship, short of full membership.'' he said.

However, Gotev drew attention to the fact that Turkey cannot be a part of multi-speed Europe discussions since the country is still a EU candidate. ''The 'speeds' are for EU members, not for Turkey, and not for the U.K. after Brexit materializes,'' he added. ''Never forget that EU members on the periphery — like EU countries from Eastern Europe — would hate the idea. Such "opening" would dilute or discount their own hardly-earned membership,'' Gotev concluded. In fact, Gotev has a point.

As some EU leaders have already expressed that the possibility of a multi-speed Europe is nothing more than an attempt to dismantle the EU.

Discussions about the multi-speed Europe have returned to the official EU agenda since the looming scenarios regarding the EU's future became unavoidable after Brexit. Thus, French, German, Italian and Spanish leaders for the EU's four largest economies met in Rome on March 6 where they debated the issue: ''A Europe of different speeds is necessary, otherwise we will probably get stuck," German Chancellor Angela Merkel said at a joint press conference after the meeting. Sharing the same sentiment, French president François Hollande argued that "unity does not mean uniformity." Spanish Prime Minister Mariano Rajoy and Italian Prime Minister Paolo Gentiloni also showed their support for the multi-speed concept. However, not all EU leaders share the same thought.

Jaroslaw Kaczynski, the leader of Poland's ruling party said: "Today, the problem of multi-speed European Union, which is in fact a breaking up of its unity, becomes real." Juha Sipila also said he opposed the idea, arguing that EU countries should move together.

In fact, discussions about multi-speed Europe closely related to members of the EU countries. But the question of whether the EU will be able to found a multi-speed Europe suggests that an intermediate solution for Turkish-EU relations still remains on the table. Prominent academic on EU affairs Emre Gönen from Bilgi University said, "As you can remember, Germany proposed a privileged partnership to Turkey before accession talks began. However, the proposal lacked legal grounds," Gönen said. "Countries can have close cooperation and some level of integration with the EU even without full EU membership. Switzerland and Norway can be considered an example of this type of relationship.'' he said, adding that Turkey is a member of the EU Custom Union and already implemented a large number of EU regulations as a candidate country having had accession talks stretching over a decade.''It's not possible to be part of the EU's decision making mechanism without being a full member. EU member states need to share some of their sovereignty rights when they become part of this mechanism. Nevertheless, so far, the EU hasn't found an intermediate way between these two, but it could be discovered moving forward," Gönen concluded.

Even though it is not yet certain whether Turkey will become a part of multi-speed Europe discussions, some argue that Turkey would benefit if Europe were to decide to switch this model. Prominent journalist and Brussels Bureau Chief of NTV television Güldener Sonumut feels the same: ''If Europe would decide to switch this model, there will be a great opportunity to redefine EU-Turkey relations and in that aspect a greater chance for Turkey to join the EU,'' he said.

''Since multiple-speed Europe will be based on the Common Values of the EU, such as human rights, democracy and the rule of law, all other aspects of integration will be based on the ability and the will to assume the duty of the policy,'' Sonumut said. ''In other words, it may be time to show the eventual value Turkey will add to Europe in terms of foreign policy, defense, energy and the internal market, fostering a more realistic relationship that aligns with the final goal of full membership. At the very least, a multi-speed Europe is an opportunity to put an end to the asymmetric relation between the EU and Turkey," he concluded.
RELATED TOPICS