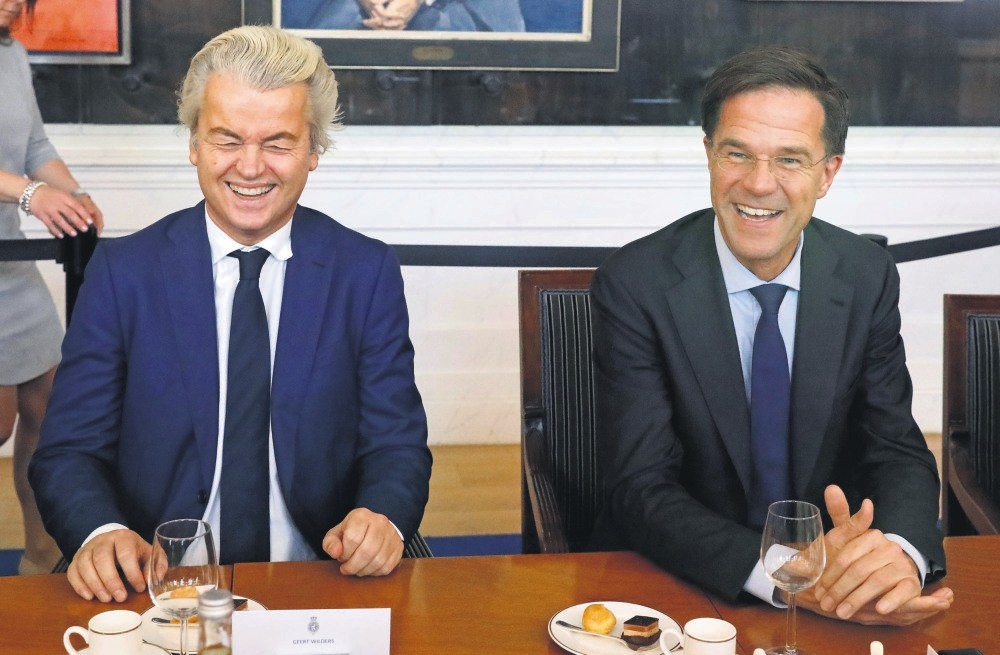 Dutch PM Mark Rutte (R) of the VVD party and Dutch far-right politician Geert Wilders of the PVV Party take part in a meeting at the Dutch Parliament, March 16.
by Mehmet Çelik Mar 18, 2017 12:00 am

Recent Dutch-Turkish tension has once again exposed the reality of rising far-right populism in Europe. While the treatment of the Turkish minister was criticized by analysts, the far-right politics taking over the center parties has also become a new trend in EU politics

The recent diplomatic row between the government and some European governments has again exposed the reality of a surge in far-right political rhetoric, as well as the central parties' tendency to lean to the right in an attempt to become appealing to far-right leaning voters. Many have said far-right discourse in the European political sphere has become a mainstream narrative.

A recent example of this mainstream-ization of far-right tendencies was utilized during the diplomatic scandal of the Dutch government restricting Turkey's Minister of Family and Social Policies Fatma Betül Sayan Kaya from speaking to the Turkish community in the Netherlands regarding Turkey's upcoming referendum, as well as preventing her from entering the Turkish consulate in Rotterdam.

Although Geert Wilder's Party for Freedom (PVV) in the Netherlands has openly voiced opposition against the presence of others or foreigners in Dutch society in general, and Muslims in particular, the incumbent government's decision to restrict the Turkish minister, the local authorities' decision to use force against peaceful demonstrators, including journalists, was also seen as another manifestation of the symptoms of normalization of the far-right political ideology in EU politics.

As the violation of diplomatic etiquette during the Dutch-Turkish row has been criticized by analysts, the question of "normalization" of far-right discourse, as well as the challenge it poses to the very basic values the EU has been proud of, such as democracy, freedom of speech,…etc, have also become matters of discussion among experts.

With regards to the treatment of the female Turkish minister and her team by the Dutch police in the Netherlands, Klaus Jurgens, a political analyst, who lived in Turkey for 12 years, and is currently based in Austria, said how the Dutch handled the situation was "outrageous."

"I have one word: Outrageous. Why only one word? Because all other options would most definitely exceed the limits of linguistic diplomacy," Jurgens said. "The way protestors were approached by the security and police makes me wonder what happened to a formerly friendly, welcoming, multicultural Dutch nation," he added.

"The treatment by the Dutch government of the Turkish minister is first of all a diplomatic scandal by itself. But it is more serious than this. The Dutch government, by denying access to Minister of Family and Social Policies Betül Kaya has breached several international rules, like freedom of thought and expression, freedom of movement and so on," said Nurşin Güney, the head of the political science and international relations department at Yıldız Technical University. Güney also says that such attitude contradicts the founding European values which the EU was built on.

During the incident last weekend in Rotterdam, the Dutch authorities did not let Turkish citizens in Rotterdam meet the minister, and did not allow the minister to reach the consulate building, in addition to carrying out the detention of the minister's adviser and security officers and Charge D'affaires Sadin Ayyıldız. In addition to this, the Dutch police used guard dogs and batons to disperse the crowd, and some protesters were bitten by the K9 dogs.

Merve Özdemirkıran, an assistant professor at Marmara University Department of Political Science and International Relations, says that the current crisis has both a legal and a diplomatic dimension.

"National sovereignty rights and public security issues give the authority and the initiative to the hosting country when a demonstration is planned and asked for by another country's officials, citizens or representatives. However, the organization of such a demonstration or meeting has to be done according to diplomatic rules and values also." Professor Özdemirkıran added that the incident "is a temporary issue which will not damage bilateral relations especially in the domain of the economy, as Dutch entrepreneurs are the second largest group of foreign direct investors in Turkey."

Open and democratic society is in danger in Europe

Aside from the violation of diplomatic norms, the undemocratic actions against the Turkish minister have also put the notion of open and democratic society to question, analyst says.

"I'm used to campaigning with the part of the Swedish electorate that resides abroad, and am familiar with different campaign activities aimed at voters from other countries who reside in Sweden. All of this is part and parcel of being an open and democratic country. But what's been happening in recent weeks — with authorities in Austria, Germany, and the Netherlands blocking Turkish attempts to hold rallies in those countries — defies belief," Bildt was quoted as saying in a recent article published by Carnegie Europe, which asked "Is Turkey challenging Europe's freedom of speech?"

Similarly, Koert Debeuf, the director of the Tahrir Institute for Middle East Policy in Europe, was quoted in the same article as saying that the recent events are a reflection of Europe challenging its own values of freedoms.

"No, it is Europe that is challenging its own freedom of speech. Some European leaders and opinion shapers are using double standards," said Debeuf, highlighting that there is a double standard when it comes to expressing diverse opinions.

"The principle of free speech is not a trump card that can be used whenever is convenient. You cannot say "Je suis Charlie" after the January 2015 attack on the offices of the French newspaper Charlie Hebdo but block others from speaking because you don't like their discourse. You cannot applaud French presidential candidate Emmanuel Macron for campaigning among his compatriots in London but condemn Erdoğan for doing the same in Belgium, France, Germany, or the Netherlands," he added.

According to Debeuf, with the double standards against President Recep Tayyip Erdoğan, Europe is simultaneously putting liberal democracy at danger. "As history shows, the end of free speech is the beginning of the end of a free and democratic society."

Jurgens also added that the EU countries should acknowledge that Turkey is no longer a weak power as it used to be. "Today's Turkey is an ever more proud, strong, healthy nation, which only recently overcame a heinous coup attempt, often with the help of ordinary citizens with their bare hands risking their lives on the night of July 15/16 last year," he said

Dutch Prime Minister Mark Rutte's People's Party for Freedom and Democracy (VVD) largely benefited from the ongoing diplomatic flare-up with Turkey, enabling him to become the leading party and win by a good margin over his far-right rival Wilders PVV.

Abel Coelho de Morais, senior journalist International Desk at Diário de Notícias from Portugal, says the Dutch government's actions should be seen as part of the election process in the Netherlands, "as well as with the present tensions in what concerns the relations between different communities in that country."

This is a point that I believe sheds light on the events which, of course, were very unhappy to have occurred as they did."

With the rise in anti-Islam and xenophobic tendencies, Wilders has even said he wishes to shut down mosques and has claimed the Quran contains more anti-Semitism than the book "Mein Kampf." The PVV got a little over 10 percent of the vote in the 2012 elections, winning 15 of the 150 seats available. The party performed better this time, getting some 13 percent and 20 seats. The VVD, however, lost a considerable amount of power, going from 41 seats in 2012 to 33 seats. However, Wilders' loss has also been portrayed as an indicator of the mainstream parties' leaning towards the far-right, rather than the elimination, or minimization, of far-right politics in general.

"Europe today is undergoing a test of how far it can go retreating from the union's democratic values as against the increasing tides of populism -- which is a result of the rise of extremist far right racist parties and the tide of xenophobia, Islamophobia and such. It is up to mainstream parties of Europe and leaders to stand against this new dangerous movement," Professor Güney said. "But, unfortunately, Europe is still keeping its silence! If present racist trend in EU countries continue then the Union's credibility and its safeguarded European values will certainly be eroded," she also added.

Commenting on the whether the increasing far-right discourse is here to stay, Jurgens also said: "I am afraid unless those European common sense politicians who are for sure still out there in many nations come together with Ankara and together stem the tide of populism which so disgustingly misuses Turkey as a political toy in order to gain votes the picture looks very unpromising indeed."