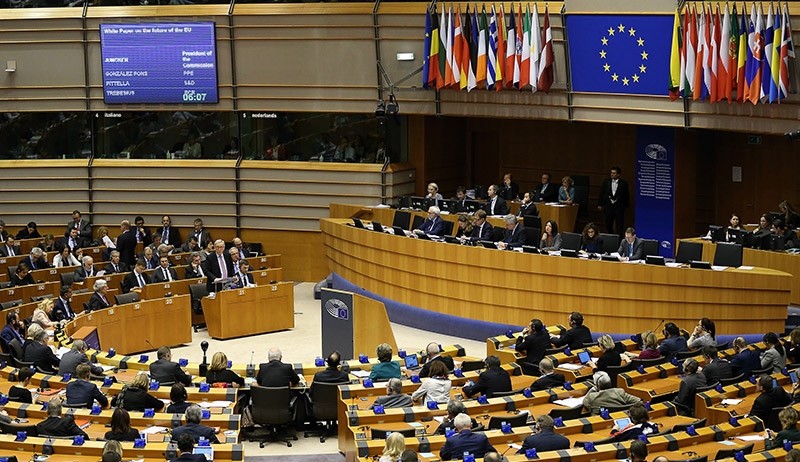 A week after Dutch police attacked a number of Turkish journalists who were covering the forced deportation of a Turkish minister in Rotterdam, a Christian Democrat Dutch member of the European Parliament took steps to stop copies of the Daily Sabah from entering the parliament. 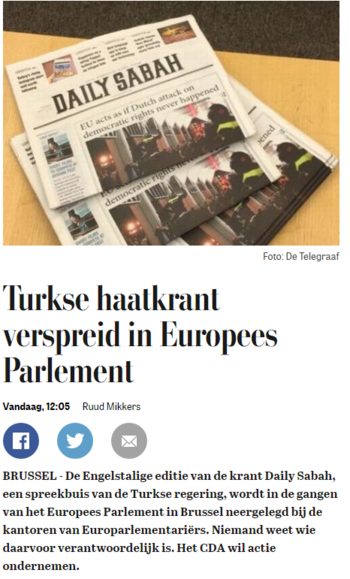 In an article published on Dutch daily De Telegraaf on Sunday, Daily Sabah was accused of spreading hate and it tried to convince its readers by pointing to an article that was published on the Turkish-language newspaper, Sabah, a sister paper of the Daily Sabah.

In the article, Sabah had exposed the Gülenist Terror Group's (FETÖ) structure in the Netherlands. This investigative report on the terror group that killed almost 300 people in an attempted military coup, not only upset the Dutch newspaper, but also led to the targeting of the only Turkish daily present at the European Parliament.

Following the forced deportation of the Turkish family minister, De Telegraaf had kept quiet about the attacks on members of the press. Moreover, it ran a scandalous headline that read, "We're the bosses here!" causing anger and frustration among some half a million Turks living in the country.

Speaking in an event in Istanbul, President Recep Tayyip Erdoğan said: "Now there are some [people] who seek to ban Daily Sabah at the European Parliament. If they ban a Turkish newspaper, this will have similar consequences in Turkey."

Copies of Daily Sabah carrying the headline "EU acts as if Dutch attack on democratic rights never happened," could also be seen in the photograph used by the De Telegraaf.

The story described how the European Commission stood silent when Daily Sabah asked if they had anything to say on the physical attack on Turkish journalists by Dutch police officers.

"Do you approve of the Netherlands' aggression on Saturday night toward Dutch-Turks, Turkish diplomats and journalists? Do you condemn them?" asked a journalist from Daily Sabah.

In an atmosphere where xenophobic politics are on rise and extremist-turned-liberals are winning the ballots, EU's double standards on freedom of press is believed to encourage attacks on Turkey, the Turkish community and on the media.

Although Lenaers' request to ban a young English-language newspaper that has proven itself in the past three years got no response from the European Parliament, the Turkish media were expecting President Tajani to break his silence on the attacks on Turkish media members by Dutch police, politicians and media.

"Bombardeer de Bosporusbruggen," (Bomb the Bosporus bridges), wrote Ronald Warnik, in his short but hateful message about the Turkey-Netherlands crisis on social media, while another user, Hannie van Elst wrote, "Please open the Auschwitz and start to collect."

Meanwhile, Kristof Winters, another user wrote, "We should shoot and kill Erdoğan."

However, there were also voices that called for an end to xenophobic policies and rhetoric.

A Dutch woman Mariska Stout defined the incidents in Rotterdam as scandalous and added, "The Netherlands gives freedom and space to all terrorist groups to protest freely in the Netherlands, even to ISIS [Daesh]. But, you refuse a Turkish minister? Where is this going? I am also glad that former minister Ben Bot thinks like us."