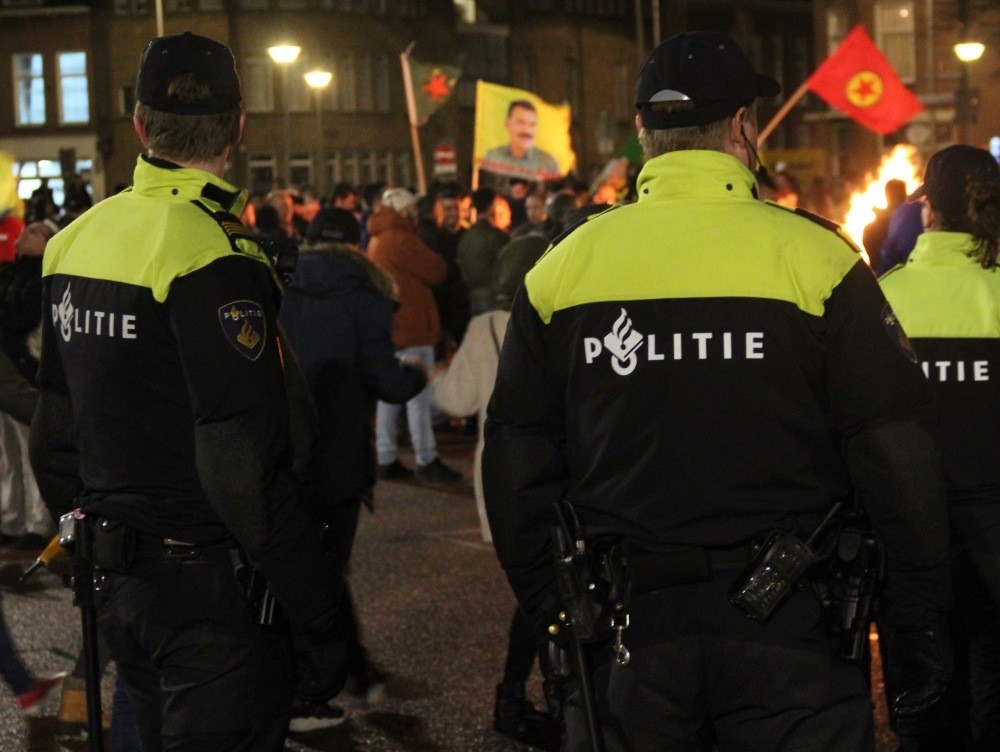 PKK supporters hold a rally in Lahey, the Netherlands with PKK flags and banners of the PKK leader on March 20.
by Daily Sabah with Wires
Mar 22, 2017 12:00 am

Ankara has again expressed frustration and anger towards the European Union's tolerance of terrorist groups, particularly the PKK and Gülenist Terror Group (FETÖ) and their activities across the continent, while it concurrently bans Turkish politicians' events for alleged security reasons. This is in direct contradiction of the bloc itself, since the EU recognizes the PKK as a terrorist group. As bans on Turkish politicians continue, the latest incident in a string of pro-PKK events in Europe took place on Monday in Belgium. Brussels allowed PKK sympathizers to celebrate Nevruz, a spring new year festival, and rally for the "no" campaign for Turkey's upcoming referendum on constitutional reform near EU institutions in the capital.

Even though the PKK is designated as a terrorist group across the bloc, EU member states' tolerance for such events is being interpreted as a contradiction by Ankara. Meanwhile, another pro-PKK event was organized in the Netherlands, during which posters of the terrorist group's imprisoned leader Abdullah Öcalan were displayed and anti-Turkey slogans were shouted. Some 200 people, who called for a "no" vote in the Turkish referendum, participated in the PKK march that took place in The Hague. The Austrian capital Vienna also witnessed a pro-PKK campaign. PKK sympathizers gathered in the city to spread propaganda for the terrorist group on Monday, as photos and videos of the event circulated on social media.

In the face of such incidents, Turkish President Recep Tayyip Erdoğan on Tuesday carried on his staunch reaction to the EU. Pointing to the horrible treatment of Turkish-Dutch citizens in Rotterdam, Erdoğan said that not only Turkish people but also the EU acquis, the body of law accumulated by the European Union, had been dragged onto the streets. "They have no humanity [or] conscience. This Europe is the racist and fascist Europe of the pre-WWII period," the president asserted.

"Some European Union states do not want to see a Turkey with political stability and economic strength," said Justice Minister Bekir Bozdağ on Tuesday. "After observing the stance of Germany, the Netherlands, Austria and some EU countries, I understand how important our attempt to change the system is," he added.

Bozdağ also slammed European governments for allowing the PKK and its sympathizers to stage rallies there. "European states, including Germany, allow the PKK terror group to organize demonstrations while Turkish ministers face bans. This is an incomprehensible situation," he said.

Turkish ministers have been campaigning in support of a "yes" vote in the upcoming April referendum on sweeping constitutional changes. Thousands of Turkish people residing in European countries are entitled to vote in the poll.

Commenting on the issue, Klaus Jurgens, a political analyst currently based in Austria with 12 years of experience in Turkey, harshly criticized the bans on Turkish politicians. "The ban on democratically elected office holders from Turkey to meet with Turkish voters, citizens abroad was and is an insult, absurd, disappointing and shocking at same time," Jurgens said.

Stressing that he witnessed a pro-PKK event in Vienna on Monday, Jurgens expressed his astonishment. "Last night was my boiling point. Here in the heart of Vienna people again waving PKK banners and flags were allowed, probably even protected, to meet and shout pro-PKK slogans. What does Europe really want? To divide and destroy today's modern, proud, democratic Turkey?" he asked.

President Erdoğan crossed the line by comparing Berlin's government to the Nazis and is no longer welcome in Germany, a senior ally of Chancellor Angela Merkel said on Tuesday.

"Enough is enough," said Bouffier, who is also the premier of Hesse state where the financial capital Frankfurt is located. "Mr. Erdogan and his government are not welcome in our country, and that must now be understood," he told DLF radio.

The president had likened the German government's attitude in the face of bans on Turkish politicians to Nazi practices.

Meanwhile, the German state television broadcaster WDR made a scandalous comment on Turkey's reaction to the recent PKK protest in Germany.

Georg Restle, moderator of the program "Monitor," compared the leader of the PKK terror organization Abdullah Öcalan with the legitimately-elected president Recep Tayyip Erdoğan by asking the question "Who is the real terrorist?"

Öcalan is being whitewashed and described as someone "who announced a cease-fire and promised the end of PKK terror."

Erdoğan is being accused of systematically destroying buildings in southeast Turkey, while Turkish soldiers rape women.

To legitimize his comment he added at the end that the PKK is not innocent, yet diverted to the "abolition of democracy in Turkey" and how the people, who are supposedly against this, are falsely accused of terrorism.

Deputy Prime Minister Numan Kurtulmuş has deemed remarks by the head of the German Federal Intelligence Service over the role of the Gülenist Terror Group (FETÖ) in the July 15 coup attempt in Turkey "unacceptable."

In an interview with the Der Spiegel weekly published on Saturday, Federal Intelligence Service (BND) chief Bruno Kahl had weighed in on FETÖ's role in the coup, saying, "Turkey has tried on different levels to convince us of that, but they have not succeeded."

Speaking to reporters in the capital Ankara following a cabinet meeting on Monday, Kurtulmuş said, "I would like to say that we have difficulty understanding why on earth he made those remarks."

Led by U.S.-based Fetullah Gülen, FETÖ is accused of orchestrating the July 15 coup plot, which left 249 people dead and 2,193 injured.

The group is also accused of being behind a long-running campaign to overthrow the state through the infiltration of Turkish institutions, particularly the military, police, and the judiciary.