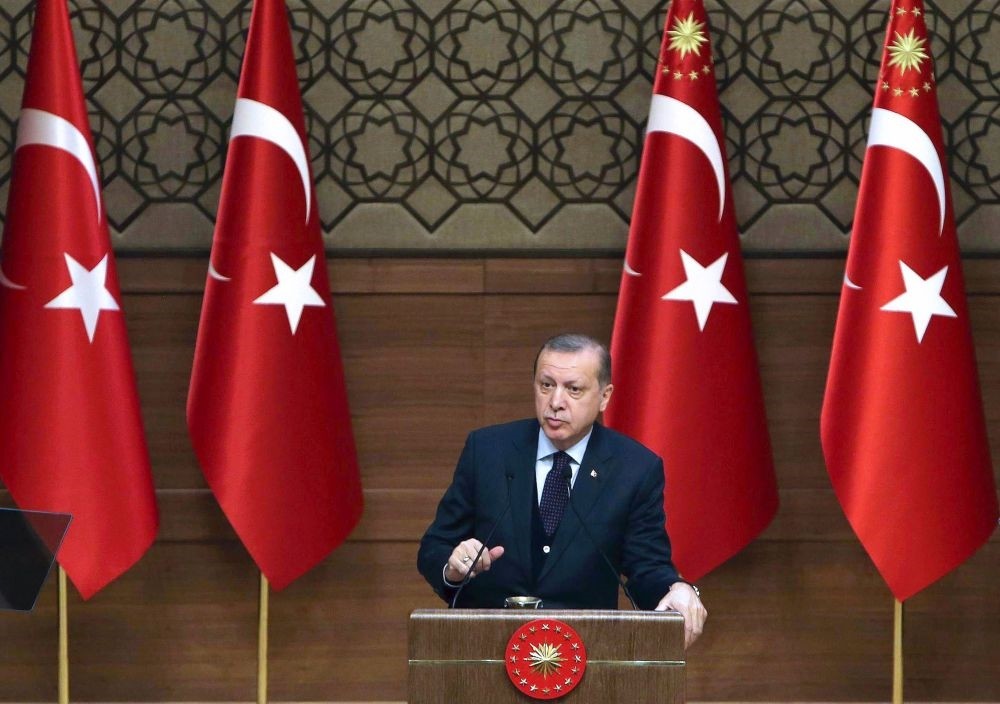 President Recep Tayyip Erdoğan Wednesday invited the European states to respect democratic values and human rights amid the recent banning of Turkish ministers from meeting ministers in Europe. The president also criticized the EU member states for tolerating activities of the PKK terror group across the union

As relations between Turkey and Germany hit bottom rock amid escalating tensions resulting from a string of banned ministerial meetings, President Recep Tayyip Erdoğan has called on European states to place value on democracy, human rights and freedoms.

Speaking at the Presidential complex, President Erdoğan, yesterday said, "The [German] Chancellor [Angela Merkel] says she is demanding the release of the journalist with dual citizenship. We have sent you [Germany] information on 4,500 PKK terrorists, but did you extradite them? The decision about [the journalist] is made by the Turkish judiciary which upholds civil liberties. He appeared in court and the court placed him under arrest, he is not in jail."

On that note, tensions between Germany and Turkey reached a new high, after the German government recently decided to block delivery of arms to Turkey, a key NATO ally in the counter-terrorism fight.

"We will not allow foreign agents [intelligence] to appear under the guise of a member of the press. The man [Deniz Yücel] was hosted at the German consulate for a month".

President Erdoğan also criticized the German chancellor for siding with the Netherlands, following the diplomatic row.

Kurtulmuş said, "We hear the echoes of neo-Nazism, racism and neo-fascism in Europe."

Speaking to the Anadolu Agency's (AA) Editor's Desk yesterday, Kurtulmuş said, the outlawed terrorist organization PKK will bring harm to Europe in the future, if it continued to be indulged by European countries.

Meanwhile, urging the EU member states to prioritize democracy, human rights and freedoms, Erdoğan said, "What's happening in Europe is being followed closely by the world. If you continue acting like this, then no Europeans -- no Westerners -- will be able to step outside in peace. If you [referring to European states] continue on this same path, you will be the ones to face the most damage. As Turkey, I invite European countries to respect democracy, human rights and freedoms. It should not be forgotten that Europeans need these values as much as we do."

Despite President Erdoğan, being resolute in his rhetoric regarding civil liberties and freedom for Turkey in European states, The Times' Columnist Roger Boyes recently wrote in his column ". ...We never really wanted Turkey in the club. Turkey's swelling population, its Muslim identity, its proximity to trouble spots, made it a difficult proposition."

Boyes further added that "Center-right parties discovered Europe's Christian identity and failed to break the bad news to Mr. Erdoğan. Instead, he was offered weasel words such as "privileged partnership"— by which point it was clear to the Turks that they were destined to remain, as they had always been for Europeans, 'The Others.'"

In other developments, the Turkish Ministry of Foreign Affairs has issued a statement, protesting German intelligence (BND) Chief Bruno Kahl's remarks that he was not "convinced" about the role of fugitive preacher Fetullah Gülen's role in the botched July 15 coup attempt.

In a retaliatory measure, the German chargé d'affaires was summoned to the Foreign Ministry on Tuesday. In addition to the controversial statement by the BND president, the German government has blocked 11 deliveries of weapons to Turkey, which is actively fighting terror groups like the PKK and Daesh on Turkish soil and in Iraq and Syria.

The blocking of deliveries began at the start of 2017, according to a document issued by the Economy Ministry and reported by DPA.

While contacted by Daily Sabah, Germany's Bundestag officials refrained from commenting on the matter, and only replied, "Responding to such recent matters would nearly take a week."

However, German authorities had previously said that they had made a decision to block arms exports to Turkey, out of fear that the weapons could be used "in the context of domestic repression or in the Kurdish conflict," referring to Turkey's 40-year-long fight against the PKK, which is designated a terrorist group by the U.S., the EU and NATO.

Notwithstanding, Germany's conditions for countries purchasing arms, which prevent them from using its weapons against PKK terrorists is not something new. For instance, in 1992 Germany asked Turkey not to use its weapons in the fight against the PKK and imposed an embargo on the country. It also attached a clause to the sale deals of Leopard-2 tanks that had restricted the use of these tanks against the PKK. This clause, however, became obsolete when a military cooperation agreement was signed between the two countries in 2009.
Last Update: Mar 23, 2017 10:17 am
RELATED TOPICS