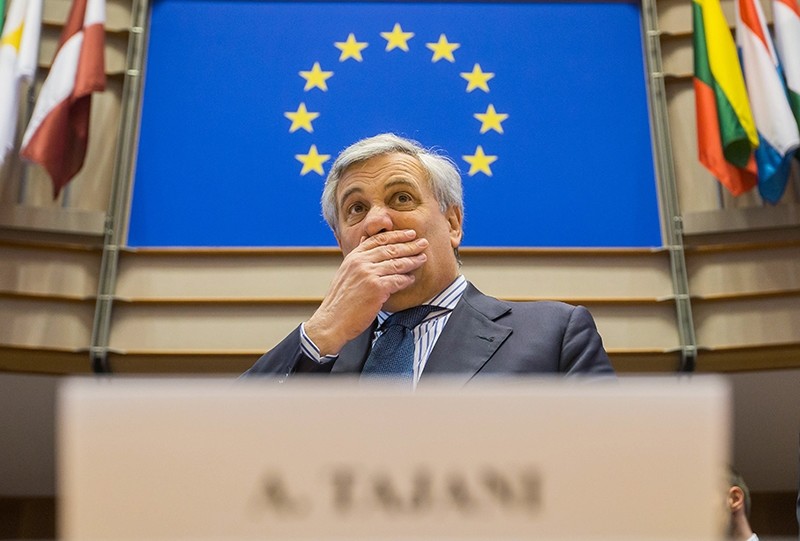 President of the European Parliament Antonio Tajani during a special Plenary session (EPA Photo)
by Mehmet Solmaz Mar 23, 2017 12:00 am

Following a campaign to ban the distribution of Daily Sabah at the European Parliament (EP), President Antonio Tajani made a scandalous decision Wednesday to forbid the presence of the newspaper in Parliament.

The hate campaign was launched by Jeroen Lenaers, a Christian democrat and Dutch member of parliament, when he sent a letter to President Tajani. Lenaers pointed out a story titled "Gülenist Terror Group (FETÖ) network in Holland" and claimed well-known Gülenist Turan Yazır and other FETÖ members were being targeted by the paper, thus providing a "valid" reason to ban its sister newspaper, Daily Sabah.

Speaking to Daily Sabah, Marjory van den Broeke, head of the press unit of the EP, confirmed the decision and said, "Some [members of parliament] were not happy with your paper." Like several other newspapers distributed on a daily basis at the EP, Daily Sabah's copies are only available on Tuesdays. When asked if the ban has been applied to all papers, Broeke said this is not the case.

Now, it has also been discovered that Lenaers previously spoke with the owners of now-defunct Zaman, a newspaper owned by FETÖ, and called on Ankara to release Mehmet Baransu, a suspected FETÖ reporter who faces multiple criminal charges in Turkey. Lenaers also shared the tweets of a fugitive FETÖ suspect Abdullah Bozkurt, who regularly targets Daily Sabah with false accusations on his Twitter account.

Baransu is standing trial for major plots, including two regarding secularist members of the Turkish army and the Fenerbahçe sports club. His ex-spouse told the media that she was threatened by Baransu. She also claimed that the reporter received money from "some people" and was involved in activities with some "friendly prosecutors." Following the July 15 coup attempt, hundreds of prosecutors were dismissed from duty for alleged links to FETÖ.

Following the forced deportation of the Turkish Family and Social Policy Minister Fatma Betül Sayan Kaya, De Telegraaf – which also targeted Daily Sabah alongside Lenaers – kept quiet on the police attacks and aggression toward members of the press in Rotterdam. Moreover, it ran a scandalous headline that read, "We're the bosses here!" causing anger and frustration among some half a million Turks living in the country.

Meanwhile, President Recep Tayyip Erdoğan while speaking at an event in Istanbul said, "Now there are some [people] who seek to ban Daily Sabah in the European Parliament. If they ban a Turkish newspaper, there will be similar consequences in Turkey."

Copies of Daily Sabah carrying the headline "EU acts as if Dutch attack on democratic rights never happened," could also be seen in the photograph used by the De Telegraaf. The story described how the European Commission stood silently when Daily Sabah asked if they had anything to say about the physical attacks on Turkish journalists at the hands of Dutch police officers.

"Do you approve of the Netherlands' aggression on Saturday night toward Dutch-Turks, Turkish diplomats and journalists? Do you condemn them?" Daily Sabah asked at the EU Commission, only to receive no clear answer.

Deputy AK Party Chairman Mehdi Eker slammed the EU, saying the bloc is drifting away from its core values. "I'm addressing the 500 million Europeans. Embrace your values. Stand in the way of such a repressive mindset," he said.

AK Party Istanbul Deputy Metin Külünk railed at the decision. Calling the EP a coward due to the ban, Külünk said it is below all EU values. "Europe is attacking Turkey to prevent its own collapse," he contended, adding that Turkish-EU relations have steered into a very difficult period.

"EP President Antonio Tajani banning Daily Sabah from the European Parliament, following the initiatives by the EP's Dutch MEP [member of European Parliament] from Christian Democrats Jeroen Lenaers, is a dark stain on the history of journalism," said Mehmet Akarca, head of the Prime Ministry's Directorate General of Press and Information (BYEGM).

"The decision, which is not based on any legitimate reason, is not only an attack on Daily Sabah newspaper or the Turkish press, but it is also an attack on basic human rights and tolerance in Europe, which claims to be the center of modern democracy, and it is an example that has exposed how problematic press freedom is in Europe," he added.

Akarca said he condemns the decision and urged to have it revoked as soon as possible.