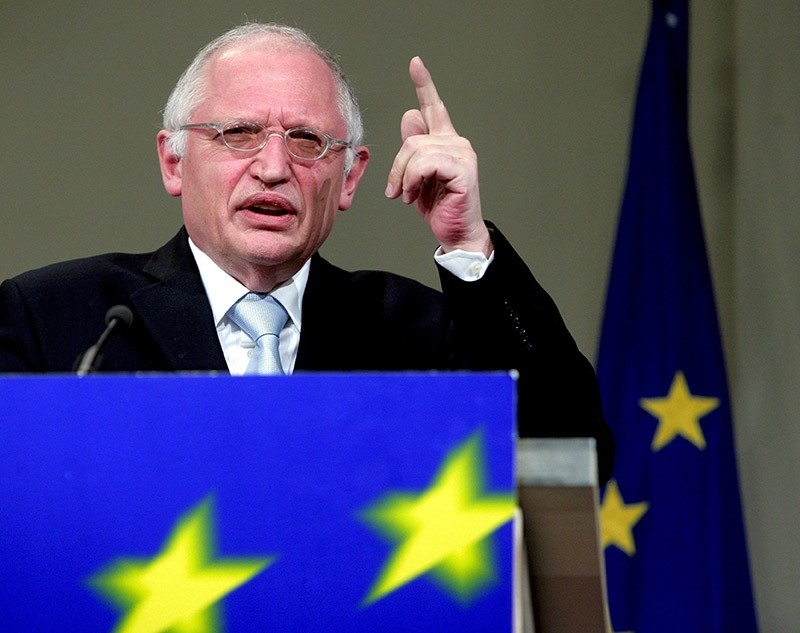 The European Union's former enlargement chief has criticized the German authorities for banning Turkish campaign rallies and has called for a de-escalation of tensions between the two countries.

"I think that the bans and obstructions are violating the democratic rules and they are an insult to Turkish citizens living in Germany," Gunter Verheugen said in an exclusive interview with Anadolu Agency.

The prominent German politician said three million Turkish migrants living in Germany had the right to hear the arguments of both the Yes and the No campaigns, ahead of Turkey's April 16 referendum on adopting a presidential system of government.

"Many politicians, not only in Germany but also in other European countries, have had the perception that treating Turkish politicians as unwelcome foreigners would be received positively by their own electorate. I view this as a dangerous opportunism," Verheugen said.

Turkey's relations with Germany, Austria and the Netherlands have deteriorated recently after authorities in these countries cancelled several planned rallies by Turkish ministers and politicians, citing security concerns.

Ankara has sharply condemned these obstructions, comparing them with the practices of fascist regimes during the Second World War, and also accused these governments of taking sides in Turkey's referendum by favoring the No campaign.

German-born Verheugen -- EU enlargement commissioner between 1999 and 2004 -- criticized the Dutch government for its stance against Turkish politicians ahead of domestic parliamentary elections on March 15, describing it as an appeal to right-wing voters.

"I share the view that the harsh stance of the Dutch prime minister has positively influenced his election victory," he said, referring to Dutch center-right premier Mark Rutte's victory over far-right rival Geert Wilders.

Soon after Ankara's family minister was forced to leave the country under police escort. These incidents forced the cancellation of planned meetings by the ministers with members of the Turkish expat community.

Verheugen said the election in the Netherlands once again showed that far-right populist leaders like Wilders were exerting an influence on government policies, even though they remained in opposition.

"I am very worried about this. We cannot defeat such an aggressive nationalism in the EU if we copy the theses and programs of such parties," he said.

Far-right and populist parties in the Netherlands, Germany and Austria have increased their anti-Turkey rhetoric recently, and campaigned for a ban on rallies by Turkish politicians amid claims they undermine integration and endangering social harmony.

Verheugen called for a de-escalation of tensions between Turkey and European governments, and urged steps towards cooperation to address common challenges.

"I believe that the mutual accusations and insults should end immediately," he said, adding:

"I would like to call on the EU to revive Turkey's EU membership perspective and make it a trustworthy process again. I also expect Turkey to clearly commit itself to enhanced democracy and rule of law, and continue to adopt European standards with no ifs or buts."