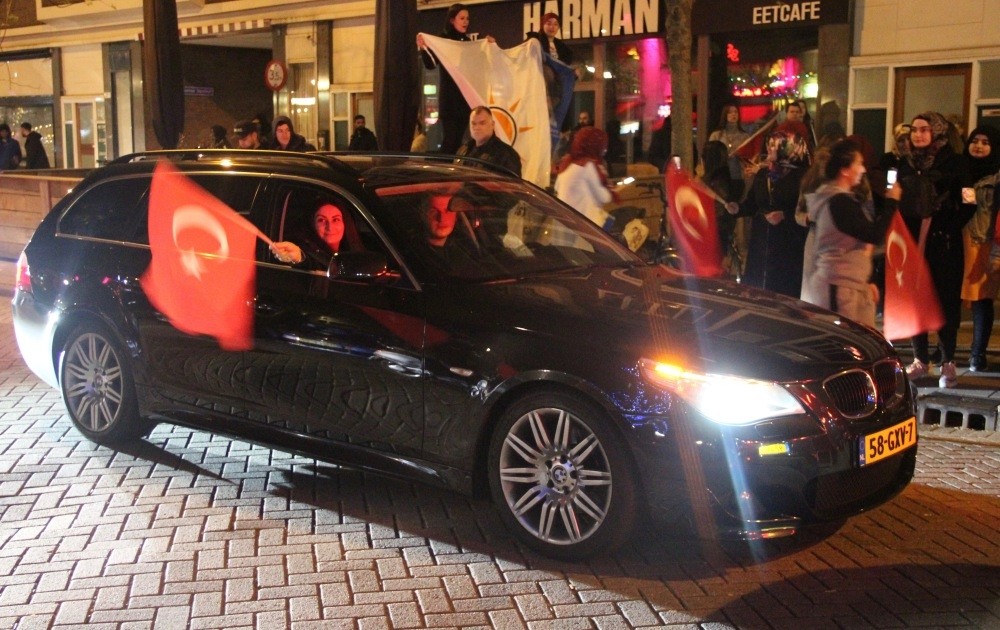 Turkish citizens across many European cities went out to the streets in crowds to celebrate the victory for u2018yes' on Sunday's referendum.
by Mehmet Solmaz Apr 18, 2017 12:00 am

Despite the prevention attempts to the ‘yes' campaign in contrast to the freedom that was provided to the ‘no' campaign, the majority of the Turkish voters that live abroad approved the constitutional changes

The majority of Turkish citizens living abroad supported the constitutional changes with the "yes" campaign garnering 75 percent of the vote in Belgium, 73 percent in Austria, 71 percent in the Netherlands, 65 percent in France and 63 percent in Germany.

The voter turnout for citizens living abroad was 48 percent with 1.4 million having a say in the referendum, 7 percent higher than the Nov. 1, 2015 general elections. Despite having to travel long distances to reach polling stations at the consulate generals, the turnout is higher than many of the national elections in Europe.

Germany, Austria, Switzerland and the Netherlands have publicly took a stand against those supporting the constitutional changes during the referendum campaigns. While supporters of terror groups and opposition parties were allowed to carry out meetings and rallies, ministers were barred from gatherings and even entering into the countries. These developments are believed to be the main motivation behind a high turnout and strong support for the "yes" campaign.

The police violence on a peaceful crowd outside the Turkish Consulate General in Rotterdam was considered a breaking point for many expat Turks, who were already cross with the government of the countrıes they are living in for beıng PKK-friendly.

Speaking to Daily Sabah, some Turks living in Belgium noted that the Turkish population in Belgium stands at around 200,000. Emphasizing that they served Belgium and had a considerable role in the development of the country, they expressed their disappointed with the country since it sided with the terrorist organizations posing a threat to Turkey. The citizens insisted on remaining anonymous, for fear they might confront hardships, such as social pressure or dismissal from their jobs. They now also fear that they may face to choose from one of the nationalities they hold.

Some European politicians were not happy with the will of their nationals of Turkish origin, who hold dual citizenship. Hours after the unofficial referendum results were announced, parliamentarians from all three coalition parties of the federal Belgian government have called for an end to the dual nationality practice. Flemish Christian Democrats (CD&V) lawmaker Hendrik Bogaert called for the abolishment of dual citizenship and said, "We cannot say that nothing has happened. Such dual nationality is not conducive to integration. One is eventually more engaged in foreign than in Belgian politics."

The deputy added immediately that the abolition would apply only to people who combine their Belgian identity with an identity outside the European Union. Such rhetoric solely aiming at those supporting the Turkish leadership is interpreted as another double standard of current populist European politics. Secretary of State for Asylum and Migration Theo Francken extended his support to Bogaert's call and said "Okay, let's dot it." He said his Flemish Nationalist Party (N-VA) has long been in favor of such a change. N-VA leader Bart De Wever called for a cross-party effort to abolish the dual nationality. "There are technical and practical obstacles, but they are not insurmountable. We have all the necessary studies and preparatory work done on it, so there is a basis of to leave."

Belgian Foreign Minister Didier Reynders is more cautious in his response. "That debate is much broader and should not be opened after a decision of a particular community. We need to take time to study it calmly." Reynders points out that many Belgians have dual nationality, including many French. "We cannot reopen the debate on dual nationality depending on the outcome of a foreign referendum." Meanwhile, Dutch far-right Party for Freedom (PVV) leader Geert Wilders called on voters who voted "yes" to return to Turkey. Commenting on a De Telegraaf news piece titled "Dutch Turks voted for Yes," Wilders said, "And now you all flock back to Turkey!"

After Family and Social Policies Minister Fatma Betül Sayan Kaya was barred from meeting the Turkish community in Rotterdam, Wilders tweeted: "Go away and never come back Betül Sayan Kaya and take all your Turkish fans from the Netherlands with you please. #byebye."
Last Update: Apr 18, 2017 2:32 am
RELATED TOPICS