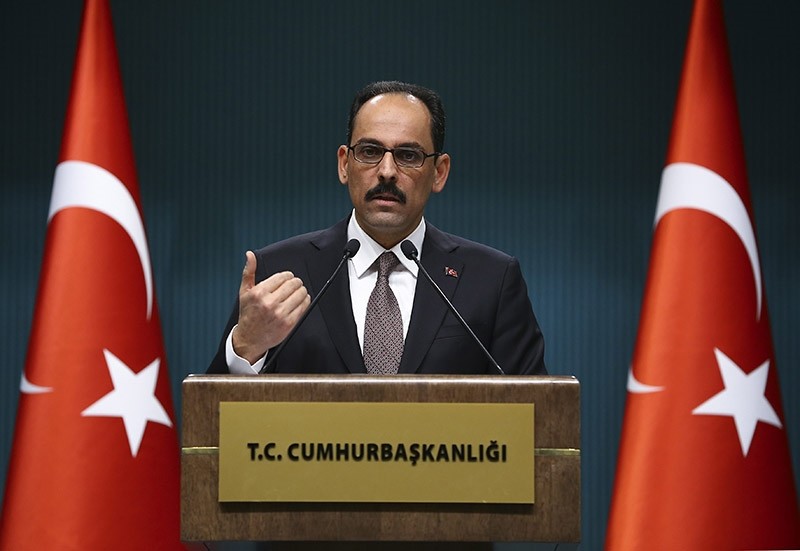 Relations between Turkey and the European Union have become further strained; especially throughout the referendum process on the constitutional amendment package and due to the controversial remarks of European officials against Turkey. In the context of current relations, Turkish presidential spokesman İbrahim Kalın told members of the media yesterday that "Europe is experiencing an abdication of reason [towards Turkey]."

Addressing the media during a press conference at the Presidential Complex in Ankara in the early afternoon hours yesterday Kalın strongly criticized the controversial position the EU has taken against Turkey with its "anti-Erdoğanism," saying: "Especially in the last few months, Europe has gone through an abdication of reason. The latest anti-Turkey, anti-Erdoğan sentiment [in Europe] is rapidly gaining momentum and causing a political abdication of reason. This is something we are attuned to and aware of as Europe continues to contradict its own democratic values." While emphasizing that Turkey desires good relations with Europe and the entire EU, presidential spokesman Kalın noted that "It is absolutely unacceptable for Turkey to welcome an imposition of hierarchy."

He further reminded Europe that it must fulfill the pledges it has made to Turkey regarding the refugee deal, emphasizing the crucial importance of providing visa-free travel to Turkish citizens. Kalın also said during the press conference that Turkey only received 790 million euros of the pledged 3 billion euro package pledged by the bloc as part of the deal, which was transferred to international institutions and not Turkish institutions. He warned that Turkey's relations with the EU could be derailed if the terms of the deal are not fulfilled, saying: "We are currently hearing statements claiming that some things in Turkey are reaching an end, along with such statements as 'it is the beginning of an end for Turkey.' They must know that everything is just beginning for Turkey as a new page is turning," Kalın added.

As the Parliamentary Assembly of the Council of Europe (PACE) prepares to hold a session today on Turkey under the report titled,"The Functioning of Democratic Institutions in Turkey," the presidential spokesman described the meeting as a "political operation" against the state. "It is clearly a political operation [against Turkey]… It is an operation by groups who are uneasy about seeing Turkey start to stand on its own two feet. We hope that they do not make a decision [to put Turkey on a monitoring/watch list] as we sincerely value our relations with the European council," Kalın said, adding that, "Regardless of all means of perception management or political impetuses, we [Turkey] will continue to conduct our duties and exert our efforts in the scope of democracy, human rights and the rule of law with transparency."

In response to Daily Sabah's question regarding President Recep Tayyip Erdoğan's high-level diplomatic visits in the coming months to countries including China, Russia, India and the U.S. as well as the NATO summit, Kalın described the president's visit to India as highly important, noting that the visit to Russia is in the scope of "ongoing, high-level talks." Underlining that the invitation to Moscow was made directly by Russian President Vladimir Putin, Kalın stated: "The defense industry, trade and tourism are going to be addressed at the meeting. There will also be talks held with regard to regional matters, including Syria." He also said that President Erdoğan is going to hold multiple bilateral talks during his visit to China, adding that Erdoğan is expected to meet with his U.S. counterpart, Donald Trump, at the White House in an upcoming visit to Washington in mid-May. Kalın also indicated that the invitation came from Trump, saying the two leaders will discuss Syria, Iraq and the potential extradition of U.S.-based former preacher Fetullah Gülen, the leader of the Gülenist Terror Group (FETÖ), who is accused of being the mastermind behind the deadly July 15 failed coup attempt.