Rising anti-Islam rhetoric ignored as it spreads through Europe 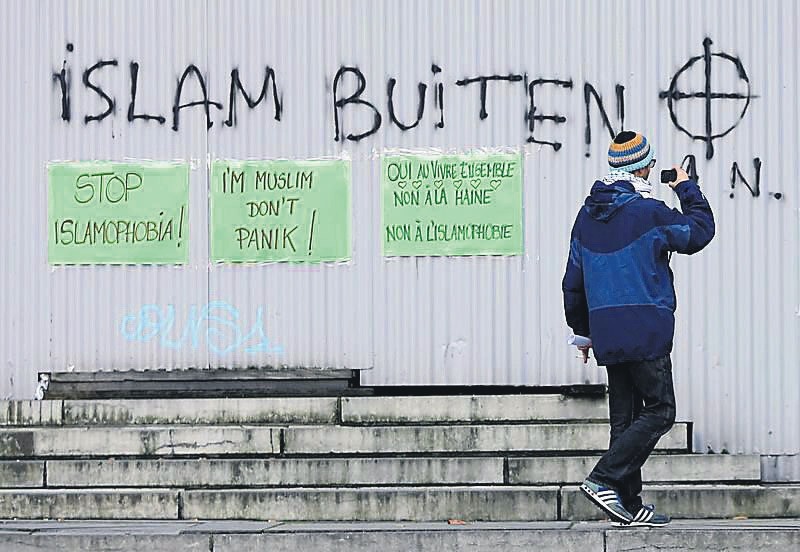 Pasted signs reading ,stop islamophobia, and ,I'm muslim don't panic, are seen under anti-Islam grafitti during a protest against Islamophobia in front of the Brussels' Justice Palace on Oct. 26.
by Şeyma Nazlı Gürbüz May 12, 2017 12:00 am

Islamophobia is escalating throughout Europe as the media, academics and politicians continue to use anti-Islamist rhetoric that results in frequant attacks on Muslims, which should be considered not just simple religious intolerance but systematic racism

An increased presence of far-right populist rhetoric in European politics has recently exposed the rise of anti-migrant and anti-Muslim tendencies in the public sphere. It drew attention to the threat that has come to dominate Europe and diminish the role of democratic values across the continent. "We can say that the current situation is the tip of the iceberg," said Enes Bayraklı, a foreign affairs specialist at the Foundation for Political, Economic and Social Research (SETA), who is the co-author of the annual European Islamophobia Report (EIR) published by SETA. 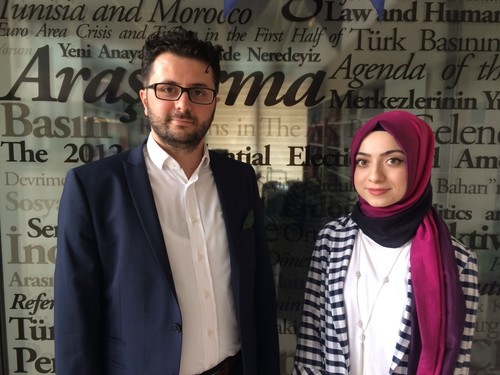 Bayraklı indicated that despite the increase in the visibility of Islamophobia as a problem thanks to social media and a rising awareness among Muslim communities, there are also many incidents not being reported or examined.

The rise in violence against migrants in general, and Muslims and Turks in particular, has become more visible in recent years, especially due to the flow of refugees fleeing conflict zones in the Middle East and North Africa.

"Today we see that Islamophobia has started to play the role that anti-Semitism did in past. In the past, the 'others' in Europe were the Jews and there was a collective hatred against them. Yet, today in Europe, being an anti-Semitic has a price. It is a negative condition. Being Islamophobic, on the other hand, is not a negative condition. In contrast, you gain profit from it politically. Thus, today, there is an argument whether or not Islamophobia is the new anti-Semitism in Europe. Yes, we can easily say that this is true."

Despite the fact that Islamophobia is considered a hate crime in Europe, it does not have its own separate category that anti-Semitism has. That is to say, there are no disincentive laws against the commitment of Islamophobia as a crime, a fact which results in the increase of anti-Islamic rhetoric as well as attacks within European society.

"When we talk about Islamophobia, we don't talk about religion-based intolerance. It is a form of racism that is based on anti-Islamist beliefs. It is anti-Muslim racism," Bayraklı said, emphasizing the fact that it is not only characterized by the discrimination of Muslims in the Europe but also by the "otherization" of them globally.

FAR RIGHT ATTACKS HAVE REACHED A RECORD HIGH IN 2016

According to a recent report by Germany's Ministry of Interior, for example, crimes motivated by far-right tendencies have reached a record high of 23,555 cases in 2016, including 1,698 of which were classified as violent attacks.

Although Islamophobia is not a recent phenomenon and anti-Islamist views have always had a place in European minds throughout history, after 9/11, Islamophobic tendencies began to rise dramatically with the contributions of the media, academics and journalists.

"Especially after the 1990's, with the collapse of communism, an anti-Islamic attitude emerged in the West, increasing step by step and reaching its peak after 9/11. We all witnessed the constitution of this hatred little by little. Thus, we can say that today's atmosphere is the result of a post 90's hatred that is constituted against Muslims," he said.

A report prepared by EUROPOL called, 'European Union Terrorism Situation and Trend Report 2016,' which classifies far-right violence under the heading of "terrorism," states, "In 2015, Islamophobic crimes against mosques and the Muslim community increased. Poland, for example, reported that in comparison to 2013-2014, the number of cases concerning Muslims and Muslim institutions has doubled, and in France, numerous incidents of Islamophobic hate crimes occurred, including firebombs, vandalism and threats."

"We know that in France or England where Muslims are densely populated, there is Islamophobia. However, the surprising thing is that the phenomenon also exists in countries such as Hungary, Poland or Latvia where there are almost no Muslims," Bayraklı stated, emphasizing the usage of Islamophobic rhetoric in these countries' media and academic circles.

"Media is one of the most influential tools that contribute to the expansion of Islamophobia. Yet, we should not blame just the media. It is only a part of the problem. There are academics, intellectuals and politicians that are also to blame. Besides, there is the perception of Islamophobia that it is an attitude of those with low levels of education only. But this is not true. Unfortunately, both the middle class and the elites also commonly share Islamophobic beliefs. In particular, the elites' Islamophobic attitude is crucial since this rhetoric then spreads to the whole of society under the direction of these people," he said.

Austrian authorities have pressed charges in about 1,690 cases related to right-wing extremism in 2015, the highest number to date in a single year and up from 1,200 in 2014, a report by Austria's domestic intelligence service BVT showed.

The blaming of Muslims for being behind the emergence of Islamophobia with their terrorist attitudes is frequently used as an attempt to legitimize Islamophobic attitudes.

After the Paris terror attack, for instance, and the declaration of the state of emergency, Muslims were targeted and Islamophobia spread to all segments of society.

Last August, a French restaurateur refused to serve a woman who was wearing a hijab saying, "I don't want people like you here. Get out. All terrorists are Muslims and all Muslims are terrorists."

"Some claim that Islamophobia is fear of Muslims and the reason behind it is the attitudes of the Muslim people themselves, 'Some radical Muslims, for instance Daesh, carry out a terrorist attack, thus Islamophobia increases. Or Muslims did not manage to integrate into European society; they act asocial or commit crimes despite all the efforts of state authorities to integrate them. And so Islamophobia arises,' they claim. When we say this, we look at the subject from the wrong perspective," Bayraklı said.

"The main cause of this problem is not the Muslims' attitudes. The main reason is the racism of the European societies, how they look at non-Europeans and how they interact with them," he added, while emphasizing that it is a political project to demonize Muslims and shine the spotlight on them alone, overlooking the bigger picture.

The Human Rights Watch released a report in 2016 that stated, "France has carried out abusive and discriminatory raids and house arrests against Muslims and alienated them under the state of emergency law. The measures have created economic hardship, stigmatized those targeted, and have traumatized children."

ISLAMOPHOBIA IS A THREAT TO EUROPEAN VALUES

Despite these demonization attempts to portray Muslims as terrorists, studies actually reveal that after 9/11, for instance, more people were killed in far-right terrorist attacks than the attacks claimed to be done by Muslims.

"Far-right terrorism is actually increasing in Europe right now and in the near future we will see that this terror will produce serious violence in Europe. Yet, unfortunately, this fact is not reflected in media reports, not even slightly," Bayraklı said.

Stating that Islamophobia is actually a threat to Europe's main values, Bayraklı added that the doors of hatred have opened via Islamophobic attitudes.

"When you act in such a hateful way to the other, you cannot know where it will stop. Thus, those who will be affected by this first will be the others in Europe, the ones who think differently to the rest of society. The doors of hatred have opened. After World War II, far-right parties were suppressed and were not able to act freely. But today, they are on the rise again. They have become the mainstream again and have started to lead European politics. The other parties, unfortunately, think that they can stop the far-right only with far-right rhetoric. This leads to a further escalation of the situation. It means that you acknowledge the agenda of the far-right," he said.

Germany's Bundestag, which is the lower house of parliament, agreed to a draft a law last month that will prevent civil servants, judges, and soldiers in Germany from wearing full-face veils at work as part of security measures they call a "precaution" to prevent extremist attacks, which is a great example of the acceptance of the far-right agenda by a leader like Merkel according to Bayraklı.

Meanwhile, Norway's anti-immigrant and libertarian Progress Party (FrP) also voted on Tuesday to ban circumcision for boys under the age of 16 and bar hijabs in public schools.

"Women who wear the hijab are particularly visible in public. It is clear that they are Muslims. So they are the ones who are attacked the most.

Even in Turkey, those who were attacked most were women wearing the hijab.

This is based on the perception that Islam does not value Muslim women. There is the idea of Muslim women being prisoners who should be liberated. Thus discriminatory attitude towards Muslim women is being legitimized by this perception. "We are liberating you by banning the hijab," they say. This kind of attitude objectifies women and takes women's freedom of will out of their hands. "It is a pure orientalist attitude," Bayraklı said.

When there is an incident of discrimination, hate crimes and hate speech, a number of different response mechanisms are actually available, but none of these are familiar to the vast majority of Muslim citizens in European countries.

According to Bayraklı, Islamophobia should be recognized as a crime in itself and statistics in regard to it should be recorded regularly, which would provide data that can be compared and contrasted.

"As a matter of fact, Islamophobia is not something that depends on Muslims. It is Europe's dominating powers' problem to be solved. They should solve it. I am not the source of this problem as a Muslim. The source of the problem is them," he said.

"Still, there are some things that Muslims can do to overcome this situation. The first thing is to place Islamophobia on the agenda of the international community, by constantly monitoring and reporting incidents, through lobbying channels in different countries, making them acknowledge Islamophobia as a crime. Another thing to do is to raise the awareness of Muslim communities in Europe and to direct them to report any incident to the authorities. It should turn into a civil rights movement. It must be recognized that this is a human rights issue," Bayraklı concluded.