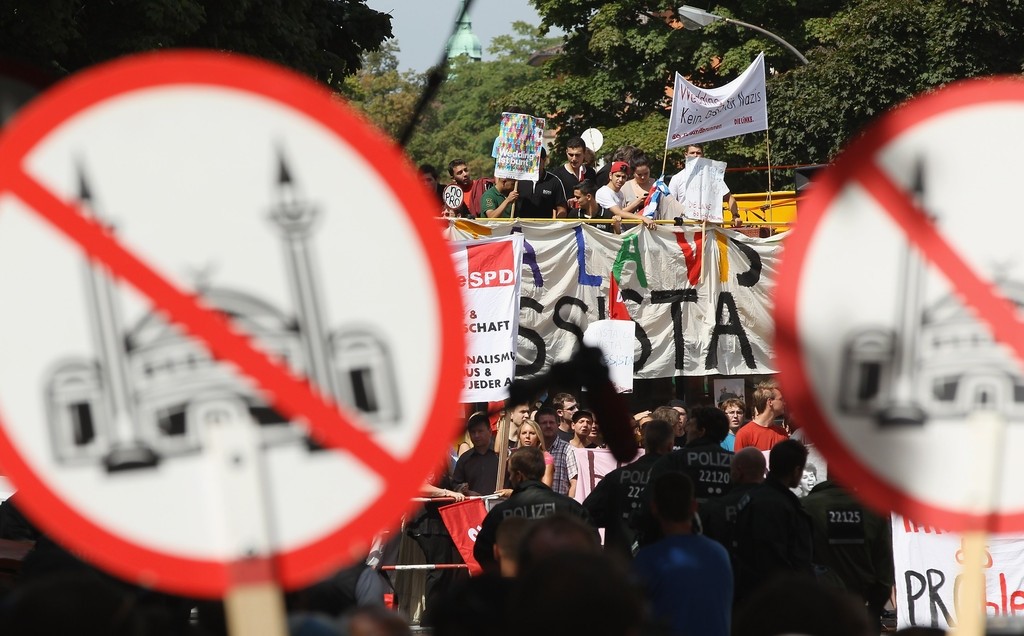 Supporters of the pro Deutschland right-wing anti-Islam group hold up signs showing a mosque with a red line through it in Berlin, Germany.
by Daily Sabah Jun 09, 2017 12:00 am

With anti-Islam and anti-Turk sentiments on the rise throughout Europe, Ayda Ünlü the deputy head of the Turkish Foreign Affairs Ministry's Citizens Living Abroad Unit has revealed that Turkish citizens abroad faced at least 57 xenophobic assaults between the months of January and May this year.

Speaking at the meeting of the Parliamentary Human Rights Commission's Sub-Commission for the Investigation of Enmity against Islam in Western Countries meeting, Ünlü said, "There have been 629 assaults against Turkish citizens living abroad between 2011 and 2015 and 128 assaults in 2016. However, 57 incidents of xenophobic assaults took place from January to May this year alone."

The rise in violence against migrants in general, Muslims and Turks in particular, has become more visible in recent years, especially due to the influx of refugees escaping from conflict zones in the Middle East and North Africa (MENA) region to continental Europe.

In fact, throughout 2016 a large number of violent attacks targeting mosques, refugee centers and establishments owned by Turkish citizens were widely reported in the media; particularly in Germany, France, the Netherlands and Austria.

The anti-Turkey stance by some European countries was particularly visible during Turkey's constitutional referendum campaign.

In that respect, Ünlü told the members of the Parliamentary Commission that "a new understanding of Islam that is individualized, limited within only one's private life and eliminated of all ethnic and cultural elements is being imposed on our citizens residing in the Western countries."

She also informed members of the commission that an electronic database has been maintained by the Foreign Ministry since 2012, noting that there is a tip line available in all Turkish consulates abroad.

In addition, the head of the Parliamentary Sub-Commission and AK Party deputy Ali İhsan Yavuz provided the latest numbers regarding anti-Islam crimes, saying: "In the first three months of 2017, Muslims in Germany faced 208 assaults while 15 mosques were attacked and 32 anti-Islam protests were held."

He also reminded commission members that the issue will be discussed further.