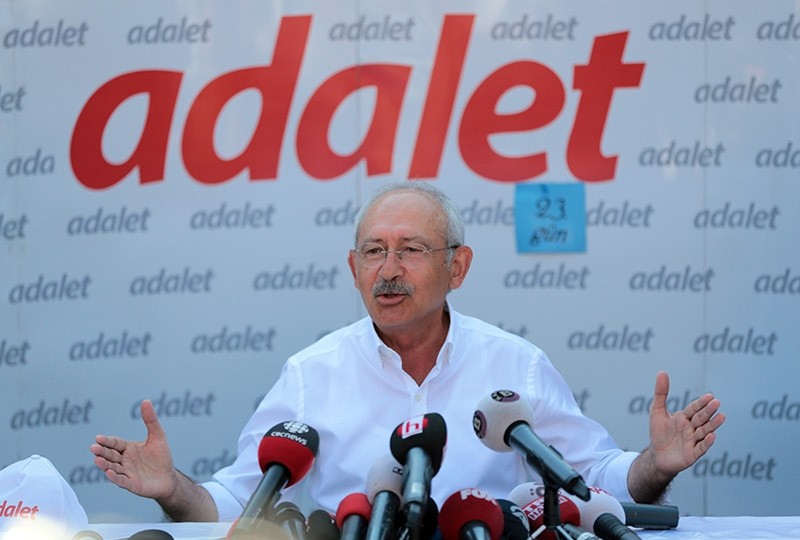 Turkey's main opposition leader on Friday called on the EU not to suspend membership talks with Ankara.

Turkey is "not just a ruling party," said People's Republican Party (CHP) head, Kemal Kılıçdaroğlu. He was speaking during a briefing in Turkey's northwestern Kocaeli province on the 23rd day of a protest march from Ankara to Istanbul.

European Parliament lawmakers on Thursday approved a report which called for the freezing of Turkey's EU accession talks.

The report said EU member states should shelve such talks if constitutional changes endorsed by Turkey's electorate in an April 16 referendum go ahead "unchanged".

Kilicdaroglu urged the EU to treat Turkey fairly and voiced hope its parliament would decide to maintain relations with the membership candidate country: "I want to call on the European Parliament from here. We want justice for everyone; we want justice from you as well."

"Turkey is not just a ruling party. Look, we are carrying out a march for justice in Turkey. There are tens of thousands of people."

"We held a referendum and more than 50 percent want democracy in this country. So, relations with the European Union need to be kept healthy and consistent, not suspended," Kılıçdaroğlu said.

"In this regard, I hope that they [the EU] support our search for justice and decide to sustain relations with Turkey... because justice is not a concept only for Turkey, but for all humanity," he added.

EP lawmakers on Thursday overwhelmingly approved a 2016 Commission Report on Turkey, voting 477 to 64 in favor. Almost 100 lawmakers abstained in the vote, which is non-binding.

The report also calls on EU institutions to suspend pre-accession funds if negotiations are suspended.

It is a non-binding vote in terms of EU decision making as the approved version of the report will be sent back to the European Commission to agree on the changes made by the parliament.

The CHP leader began a 350-kilometer (217 mile) trek on June 15 following the jailing of CHP lawmaker Enis Berberoğlu who was sentenced to 25 years in prison for giving information to a newspaper on the alleged transportation of Turkish arms to Syria.