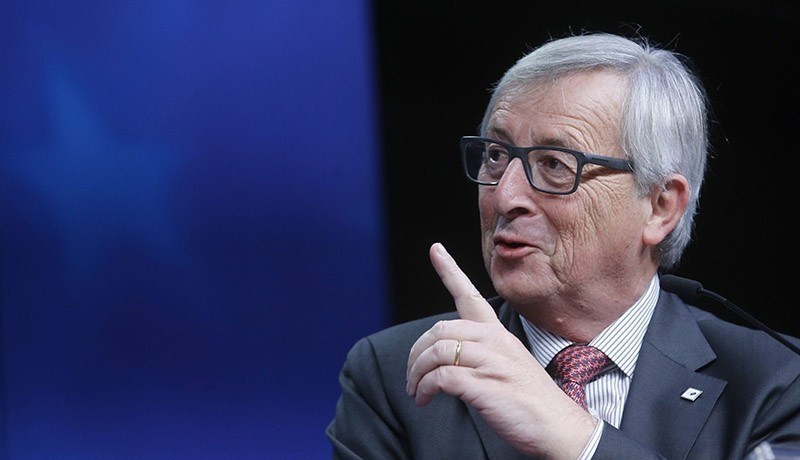 European Commission chief Jean-Claude Juncker has called for a revival in EU-Turkey ties with closer cooperation in the areas of energy, security and fight against terrorism.

In an opinion piece for the German weekly Bild am Sonntag, Juncker reaffirmed EU's stance against the July 15 defeated coup in Turkey last year and reiterated the bloc's support for the democratic institutions of Turkey.

"Together, we can achieve more than we would achieve individually," he said as he urged for pragmatic steps to enhance relations in areas of common interest, despite political disagreements on a number of areas.

Relations between the EU and Turkey deteriorated since the coup bid in Turkey last year, which left 250 people martyred and nearly 2,200 injured.

Ankara had sharply criticized its EU partners for not showing strong solidarity with the Turkish people against the attempted military takeover.

EU officials, on the other hand, raised concerns on rule of law and human rights, amid large-scale investigations by Turkish authorities into the Fetullah Terrorist Organization (FETO), which is believed to have orchestrated the foiled coup.

Juncker said the EU was carrying out an open dialogue with Ankara over its disagreement on several issues, highlighting that the bloc is willing to further enhance ties with Turkey, which is a candidate for membership into the 28-member body since 1999.

Juncker also underlined that Turkey's stability, its democratic and economic achievements were also in EU interest.

Recalling his meeting with Turkish President Recep Tayyip Erdogan in Brussels in May, Juncker said both sides had a common desire to enhance cooperation on various areas.

"We were in agreement to deepen our cooperation in a stepwise manner, in areas such as energy, security and fight against terrorism," he said.

Juncker praised the EU-Turkey cooperation to reduce irregular migration in the EU as a success story.

"Since the EU-Turkey agreement came into force, the number of refugees coming from Turkey to Greece decreased by 97 percent," he said.

He said, so far EU countries had accepted 7,600 Syrian refugees from Turkey, and provided 1.6 billion euros for projects to improve conditions of refugees who took shelter in Turkey.

The EU and Turkey reached an agreement in March last year to stem the illegal flow of people across the Aegean Sea, and improve conditions for millions of refugees sheltered in Turkey.

While the plan has successfully reduced refugee flows, Turkish authorities have been critical of the EU for delays in promised funding for more than 3 million refugees living in Turkey, and for the lack of progress in talks to accelerate Turkey's EU membership.

On Turkey's stalled EU membership talks, Juncker argued the EU was "a union of values" and any candidate country had to meet the common standards of the 28-member bloc on human rights, press freedom and rule of law.

He warned Turkey's potential move to reintroduce the death penalty would mean the end of EU-membership talks.

Capital punishment is banned in all EU nations.

Despite recent political disagreements between Brussels and Ankara, Juncker said the EU was willing to further enhance ties with Ankara.

"One year after the attempted coup, Europe's hand remains outstretched," he said.

"Now I wait that Turkey would also clearly show its European colors and firmly follow the European basic values," he added.