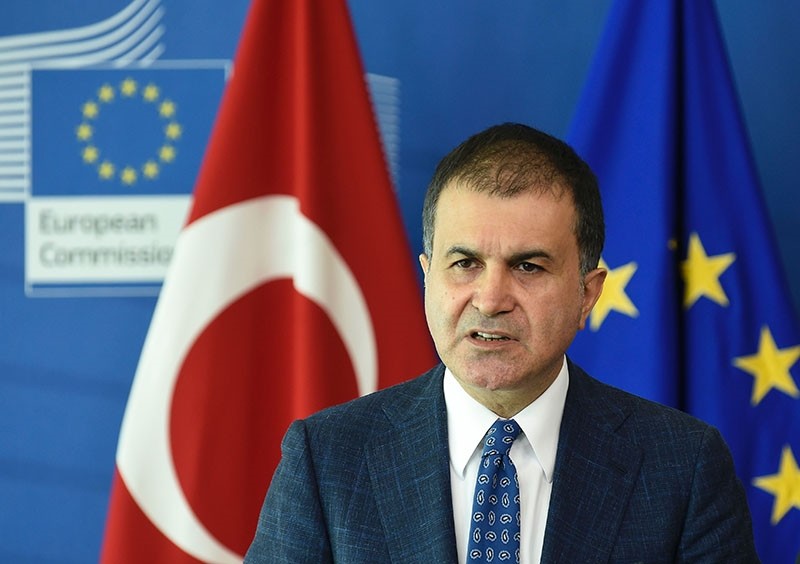 The Turkish government warned the European Union that using the customs union update as leverage works against its own interests as European Commission President Jean-Claude Juncker suggested that the 28-nation bloc use the negotiations to upgrade the Turkish-EU Customs Union agreement to get some concessions from Ankara on several issues.

Commenting on the recent strained relations between Ankara and Brussels, Juncker said the EU should not easily let Turkey acquire better trade relations with the bloc. In response, Turkey's chief negotiator, EU Affairs Minister Ömer Çelik, said late Wednesday that using the customs union update as leverage against Ankara is against the EU's interests.

Juncker said in an interview with German broadcaster ARD that Ankara should be forced to compromise. "I have talked to myself about this, but there have been so many events in the last 18 months, including the freedom of objectively reporting journalists, so I do not want to say that we should do so without compromising."

Ankara's customs union agreement with the EU came into force in 1995, and has gained momentum recently, although it does not include agriculture, services or public procurement. Both Turkey and the EU seek to expand the scope of the agreement, which would positively affect mutual trade relations in the above-mentioned industries.

The free trade agreements that the EU will sign with third parties will also include Turkey. As the scope of the current customs union agreement is rather narrow, many products cannot be sold to EU countries. The new agreement aims to increase trade volume between Turkey and the EU by 50 percent over the next 10 years.

Juncker touched on Ankara's accession talks, as well. Accusing the Turkish government of perpetually drifting away from the EU, Juncker said bilateral ties are crumbling. That being said, ruling out the possibility that the EU should end accession talks with Ankara, he said the burden of ending the talks should not be imposed on the EU: "Transferring the burden of responsibility to the European Union instead of leaving it to Turkey, I would not consider it an example of sophisticated statesmanship."

German Foreign Minister Sigmar Gabriel said in an interview with the German magazine Stern that Ankara reacted to Berlin's threats of economic sanction, adding that this is something often needed. "The Turkish government is reacting to economic pressure," Gabriel said. "It is often needed and it does not please me. My heart is bleeding."

Despite claiming that economic sanctions on Turkey are often needed, Gabriel said he is saddened by his own government's actions because "the travel warnings from the Foreign Ministry for Turkey hit hotel operators and beach owners in the west of the country. They are "the most German-friendly Turks."

Ties between Ankara and Berlin have been strained in recent months as Turkish leaders slammed Germany for what they said was turning a blind eye to outlawed groups and terrorist organizations, while German politicians criticized Ankara over human rights and freedom of the press violations.

Weeks before the general elections in Germany in September, Chancellor Angela Merkel's coalition government sharpened its tone on Turkey and adopted a number of economic measures in an attempt to increase pressure on Ankara. Furthermore, Gabriel announced in July that business trips and holidays in Turkey are no longer safe.

German opposition parties increased pressure on the government, particularly due to the recent arrests of a number of German citizens in Turkey, including a journalist and a human rights activist, for alleged support of terrorist organizations.