Merkel calls on EU to join its anti-Turkey rhetoric, vows to halt or end accession talks 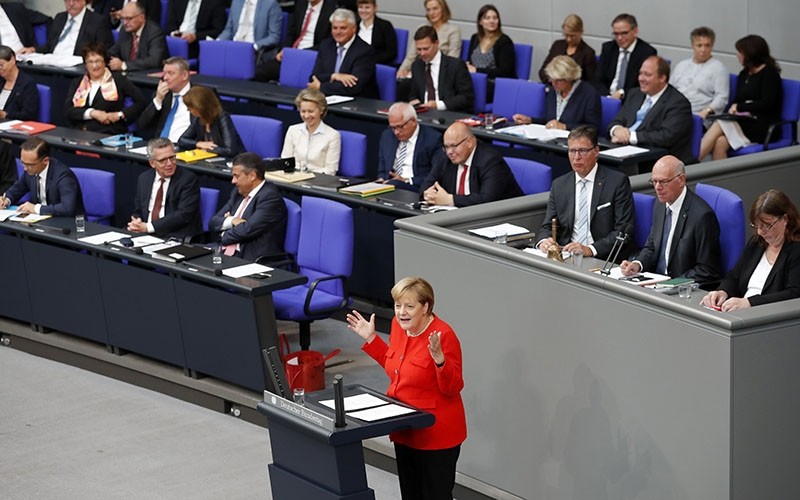 German Chancellor Angela Merkel delviers a speech during a session of the German Bundestag in Berlin, Germany, Sept. 05, 2017. (EPA Photo)
by Daily Sabah with Reuters Sep 05, 2017 12:00 am

Amid Germany's aims to direct other EU member states towards a unified anti-Turkey stance which threatens to bring an end to Turkey's EU accession talks, German Chancellor Angela Merkel claimed Tuesday that Turkey is drifting quickly away from the rule of law, vowing to push fellow EU member states to consider the suspension or ending of accession talks in the October meeting.

Less than three weeks before elections in Berlin, Chancellor Merkel vented her frustration with Turkey, spelling out her intentions clearly to the lower house of the Bundestag after sharpening her rhetoric Sunday by saying that Turkey should not become a member of the EU.

Those comments, which were made during a televised debate between Merkel and Social Democratic Party (SPD) rival Martin Schulz, was met with accusations of populism from Ankara in what was the latest in a series of spats between Merkel and President Recep Tayyip Erdoğan in the last two years.

Merkel added her government would do everything it could to secure the release of Germans detained in Turkey, who Berlin claims are innocent.

Merkel said developments called for a rethink of Germany's and the EU's relations with Turkey.

"We will also - and I will suggest this takes place at the EU meeting in October - discuss future relations with Turkey, including the question of suspending or ending talks on accession," she said.

"I will push for a decisive stand ... But we need to coordinate and work with our partners," she said, adding that it would damage the EU if Erdoğan saw member states embroiled in an argument. "That would dramatically weaken Europe's position."

Ankara criticizes Germany for its 'lack of vision'

On Sunday, Ankara criticized the current state of German politics for focusing on anti-Turkey sentiments, which he said indicates a growing "lack of vision" in Europe.

In a series of messages posted on his official Twitter account yesterday, presidential spokesperson İbrahim Kalın said the fact that the televised debate on Sunday between Chancellor Merkel and her opponent, center-left candidate Martin Schulz, focused on Turkey and President Erdoğan was "no coincidence."

"Attacking Turkey and Erdoğan with total disregard for the fundamental and urgent needs of Germany and Europe is a reflection of the narrowing vision in Europe," Kalın said, adding that anti-Turkey sentiments and the act of ignoring basic local issues by putting the blame on the "other" has become a means of relief for European politicians.

Speaking in Slovenia on Sunday, Foreign Minister Mevlüt Çavuşoğlu attributed the recent statements of German leaders to the upcoming election in the country.

"Germany should not have come to this point. I had hoped that they would return from the road that they had gotten on," Çavuşoğlu said, adding that bad relations are harmful for both sides.

The Turkish Foreign Ministry also released a statement Tuesday regarding the use of rhetoric against Turkey as election material both in Germany and Austria, saying that they follow the process with compunction while adding that maintaining such rhetoric leading up to an election is harmful for Europe as a whole.

Speaking at the 12th Bled Strategic Forum in Slovenia, Mogherini said EU member states could discuss the future of Turkey's membership bid within the EU, however, accession talks will continue regardless.

"We are not always agreeing on everything. There are some issues. ...that are causing our positions to diverge drastically, but talks continue," she added.

"Aside from the membership talks, the EU and Turkey are also regional partners. Despite the difficulties of this partnership, we are working together on many different chapters for accession," Mogherini said.

She said it is important to look at the relationship between the bloc and Turkey, extending beyond the remarks made during the election campaigns.

During the televised debate Sunday, Merkel said that she would ask the EU to call off membership talks with Turkey, amid escalating tensions between Berlin and Ankara.

"I don't see them ever joining [the EU] and I had never believed that it would happen," she said during the debate, ahead of upcoming elections later this month.

Meanwhile, in order to discuss the recent events, Turkey's Minister of EU Affairs Ömer Çelik will attend the EU Informal Meeting of Foreign Affairs Ministers (Gyminch) on Sept. 7-8, which will be held in Estonia.

The meeting will focus on Rohingya Muslims in Myanmar, as well as Merkel's anti-Turkey remarks and Turkey's EU negotiation process.

Çelik was also among those who bashed Chancellor Merkel and candidate Schulz for remarks made on his Twitter account Tuesday, saying that they are in a race to speak about Turkey.

"It seems that Germany has no issue other than Turkey in regards to making domestic politics matter while the elections approach," Çelik said, adding that good relations between Turkey and Germany would benefit everyone.

"Thus," he tweeted, "German politicians should get rid of this careless rhetoric, which is a serious problem for Germany."

Relations between Turkey and Germany, the latter of which is home to 3 million ethnic Turks, have become badly strained, particularly since the failed coup attempt one year ago against Turkey's democratically elected government by the Gülenist Terror Group (FETÖ). Turkey accuses Germany of harboring high-ranking FETÖ figures and soldiers linked to the coup attempt, in addition to allowing the activities of the PKK and the Revolutionary People's Liberation Party-front (DHKP-C) terrorist groups to continue in Germany.

A recent example of support to FETÖ was Germany's rejection of a formal request from Turkey to freeze assets of members of the FETÖ, which remains strong among the Turkish diaspora as Berlin ignores calls from Turkey to shut down FETÖ-linked institutions.

Whereas Berlin, for its part, criticized Ankara over the crackdown that followed last year's failed coup attempt, accusing Turkish officials and imams affiliated with the Turkish-Islamic Union for Religious Affairs (DİTİB) with espionage.

In the run-up of Turkey's April 16 constitutional reform and presidential system referendum, Germany was among the European countries that barred Turkish ministers, ruling Justice and Development Party (AK Party) politicians and other figures to hold events for the "yes" campaign, while allowing the opposition's "no" events. This stance added more fuel to tensions among the two countries, especially at a time when PKK sympathizers were able to freely hold marches and fundraisers in German streets.

The arrest of several German nationals, including the Turkish-German journalist Deniz Yücel, the Istanbul correspondent of the Die Welt daily who being accused of espionage and terrorism charges, further frayed ties. A total of 11 German nationals, including three with dual German-Turkish citizenship, are in custody as part of ongoing terror probes. Germany portrays these incidents as political imprisonment and demands their immediate release, although Turkish officials repeatedly stated that they will be subject to the same judicial procedures, which are currently continuing.

Following the arrests, Germany, which is Turkey's largest trading partner, warned of economic measures that would impact tourism and investments.

In return, Erdoğan urged ethnic Turks in Germany to vote against Merkel's Christian Democratic Union (CD) and their coalition partners, the Social Democratic Party (SPD), in Sept. 24 elections, describing them as parties "hostile against Turkey."

In early June 2016, German parliament adopted a resolution describing 1915 events as "genocide" against Ottoman Armenians, prompting angry reactions from Turkey, which in turn repeatedly barred German lawmakers from visiting soldiers stationed in Incirlik Air Base for anti-Daesh operations. As a result, Germany decided to move the aircraft and related personnel to Jordan.