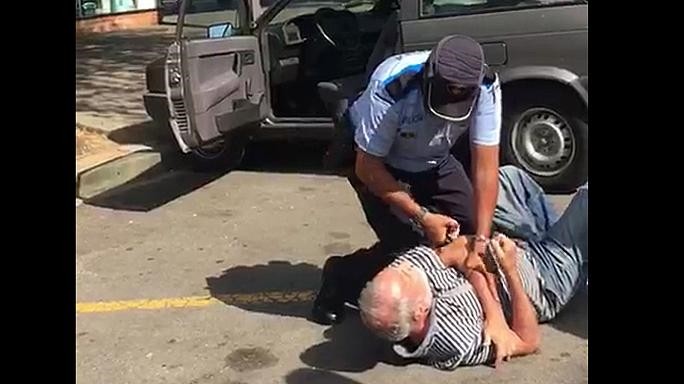 A 60-year-old Turkish man was beaten by Greek Cypriot police until he fainted, and has been remanded in custody for the last five days after accidentally passing into the Greek side at a crossing in capital Nicosia.

Mehmet Sapmaz, a Turkish national who resides in Gazimağusa (Famagusta) in the Turkish Republic of Northern Cyprus, briefly crossed into Greek Cypriot territory on his bike at the famous Ledra Palace crossing without noticing the checkpoint on Aug. 31.

KISA stated that nobody stopped Sapmaz while he passed through the border, and other people were freely passing by, but a police vehicle started chasing the man right after they noticed him.

Following orders by the police, Sapmaz returned to the border checkpoint, but was then attacked by a Greek Cypriot officer who was in the vehicle during the brief chase and continued to punch and kick the man even after he fell from his bike and collapsed on the floor unconscious.

The attack resumed at the police station while another officer stood by and did nothing to prevent it, KİSA added.

The Greek Cypriot police first wanted to record the incident as an attack by the Turkish man and resistance to a police officer. However, upon reactions and contrary statements from KİSA and other Greek Cypriots who witnessed the incident before the Independent Authority for the Investigation of Allegations and Complaints against the Police (AADIPA), an investigation was launched into the incident and Sapmaz did not face any charges.

Answering a question regarding KİSA's application, Greek Cypriot police spokesperson Andreas Angelidis said that Sapmaz's application to AADIPA was facilitated, necessary medical checks were carried out by forensic examiners, and that the issue is currently before the AADIPA. He added that Sapmaz has been detained since September 1 through the administrative order of the Director of the Civil Registry and Migration Department, KİSA said, describing the detention as "illegal" and called for his immediate release.

The 60-year-old man also had to spend the entire Qurban Bayram (Feast of the Sacrifice, also known as Eid al-Adha) in detention.

In addition, the authorities intend to deport Sapmaz to Turkey through Greece, KISA said, instead of facilitating his return to his family in the TRNC through cooperation with authorities at the U.N. as it is considered a special case.

As Turkey and the Greek Cypriot Administration – internationally recognized as the Republic of Cyprus – do not maintain diplomatic ties, Turkish nationals who cross into the south from the TRNC – only recognized by Turkey – are subject to a lengthy deportation via Greece when apprehended by security forces in a process that usually takes five to seven days.

The north-south border dividing the island and capital Nicosia, a U.N. buffer zone known as the "Green Line," has been calm over the last decade with only minor scuffles involving security forces and immigrants. Cypriots, both from the Turkish and Greek parts, are able to pass crossings freely and tourists are also subject to lax requirements.

However, the U.N. maintains the United Nations Peacekeeping Force in Cyprus (UNFICYP) at the buffer zone since 1974, when Turkey used its guarantor rights and conducted a military intervention to the island to protect the long-persecuted Turkish Cypriot community against a right-wing Greek Cypriot junta aiming to unite the island with Greece.