Split over how to treat Turkey, EU leaders running at cross purposes 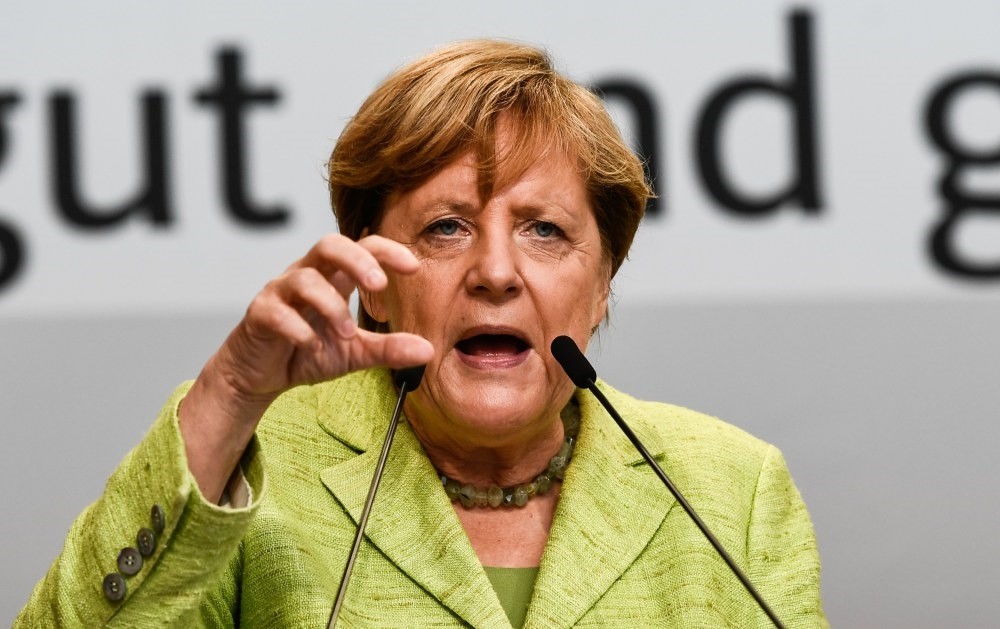 Commenting on Turkey's accession to EU, ,I don't see them ever joining and I had never believed that it would happen,, Merkel said on Sunday.
by Daily Sabah with Agencies Sep 08, 2017 12:00 am

German politicians' calls to mobilize the EU against Turkey and put an end to talks with Ankara, in the run up to the Sept. 24 federal elections, has drawn mixed messages from the EU leaders, who say Turkey is a vital partner for the bloc and that talks should continue

Amid intensifying anti-Turkish rhetoric among German politicians including Chancellor Angela Merkel who recently called to halt Turkey's EU accession talks, an intra-bloc conflict has emerged, with EU leaders voicing opposition to breaking off Turkey's negotiations. "Lines of dialogue must remain open because we have the problem of migration and the fight against terrorism. We need to continue talking and push Turkey to change its position," European Parliament (EP) President Antonio Tajani said on Wednesday.

Chancellor and Chairman of the Christian Democrat's Union of Germany (CDU/CSU) Merkel said on Sunday that Turkey will never join the EU, adding that accession talks should be halted. "I don't see them ever joining and I never believed that it would happen," she said during a televised political debate against Social Democratic Party (SPD) leader and political candidate Martin Schulz ahead of the upcoming federal elections on Sept. 24. Schulz said he would stop Turkey's bid to join the EU if he was elected chancellor. In an attempt to mobilize the EU against Turkey, Merkel also said that the future of ties with Ankara will be discussed in a meeting in October.

"We will also - and I suggest that this takes place at the EU meeting in October - discuss future relations with Turkey, including the question of suspending or ending talks on accession," she said on Tuesday.

On the other hand, EP President Tajani's words came days after the EU's Foreign Policy Chief Federica Mogherini stressed that Europeans "tend to forget that Turkey is a key player in a region that is strategically important for us."

"We are continuing to talk with Turkey," Mogherini said during the 2017 Bled Strategic Forum. "We do not always agree on everything. There are some issues […] that are taking our positions very much apart, but talks continue." She added that Turkey is a country "with which we are working on some files that are fundamentally strategic for both us and them, from counterterrorism to the Cyprus issue to Syria."

Speaking to Brussels-based Politico EU magazine, Tajani added that the EU should end Turkey's membership talks on only one condition: If Ankara brings back the death penalty. "It's very difficult today for Turkey to get into the EU, but we cannot close the chapter," he said.

Tajani took a different stance than the EP which elected him as president in January. In protest of the decision of Turkish citizens to vote in favor of the constitutional changes in Turkey's governance, EP lawmakers voted to freeze Turkey's accession bid - a nonbinding decision.

Regarding more discussions on negotiations following the Sept. 24 elections in Germany, Mogherini said: "In the future, I would suggest that we look beyond what is said during electoral campaigns both in Turkey and the EU. And, I am looking forward to the moment when we sit together at the table and find what is going to be the future of our relations."

Mogherini's remarks were met with a response by Merkel on Tuesday, saying, "If Europe were to publicly quarrel before the eyes of President [Recep Tayyip] Erdoğan, this would dramatically weaken the European position."

President Erdoğan slammed Germany yesterday for using an anti-Turkish rhetoric as the main point in its election campaign, saying that they should focus on doing their own jobs rather than focusing only on Turkey and Erdoğan.

"They only talk about Turkey and Erdoğan. What did Erdoğan do to you? Is this election being held in Germany or Turkey? Focus on doing your own job," Erdoğan said in a speech addressing the ruling Justice and Development Party (AK Party) provincial chairmen, while asking how European leaders will be able to look him in the eye after the elections.

Stating that EU countries are trying to force Turkey to terminate the accession process itself rather than declaring the bloc's true intentions - a stance the president described as "immoral" - Erdoğan called on EU leaders to be "sincere in their policies regarding Turkey."

Macron was speaking to the Greek newspaper Kathimerini ahead of his arrival in Athens for a two-day official visit.

Macron highlighted Turkey's significance in tackling the migrant crisis and the counterterrorism fight, adding that a split from accession talks should be avoided. Regarding the EU-Turkey refugee deal, Macron said that it has yielded results and reduced a lot of pressure on Greece which was bearing the brunt of the migration crisis.

On Wednesday, EU Migration Commissioner Dimitris Avramopoulos said at a press conference in Brussels that there has been a 97-percent drop in migrant arrivals from Turkey to Greece since March of last year, as a result of the effectiveness of the EU-Turkey migrant deal.

'Turkey-EU relations should not be politicized'

Estonian Foreign Minister Sven Mikser, whose country currently holds the rotating six-month presidency of the Council of the EU, criticized German politicians Wednesday for politicizing EU-Turkey ties as part of their campaigns ahead of parliamentary elections on Sept. 24.

In an interview with German public radio Deutschlandfunk, Mikser underlined the strategic importance of Turkey for the EU and urged caution in the heated debate over ending Turkey's membership talks. "All decisions about the future of EU-Turkey ties should be considered very carefully, and they should not be made during election campaigns," he said, highlighting the importance of Turkey as a strategic partner in many areas.Mikser, however, underlined that Turkey is an "indispensable partner" of the EU in addressing the migration crisis. "As the EU, we also have very significant trade ties with Turkey. The country is also a key player regarding the security situation in the region. In addition to that, it is one of our strongest and militarily best prepared NATO allies," he said.

Meanwhile, arriving at talks with his EU colleagues in the Estonian capital of Tallinn, German Foreign Minister Sigmar Gabriel said it was Turkey itself that was moving away from the EU, while Austria's Sebastian Kurz reiterated his line that the talks should end.

Bert Koenders of the Netherlands said he agreed with Germany's call to also stop separate talks on upgrading the EU's customs union agreement with Turkey but suggested that Berlin's stance would only become clear after the parliamentary vote later this month. "We will have to see what happens," Koenders said. "After the German elections it will be the appropriate time for more discussions on this."

However, the foreign ministers of Finland and Lithuania spoke out against breaking off negotiations.

"No, we should continue the process and engagement. It's not easy but we have to value our contacts," Lithuanian Foreign Minister Linas Linkevicius told reporters in the Estonian capital Tallinn.

"By stopping, by cutting the ties, we will not make a good thing because we will encourage them even more to go away. I think the effect of this would be the opposite than what we'd wish."

Turkey's EU Foreign Affairs Minister Ömer Çelik is due to join the bloc's 28 officials for talks in Tallinn later on Thursday.

Even though the German government is pressuring the European Commission (EC) to suspend preparatory work on the current negotiations with Ankara regarding updating the customs union agreement between the EU and Turkey, the EC continues to negotiate with Turkey.

The EC's seventh report on the progress made in the implementation of the EU-Turkey statement that was published on Sept. 6 states that the modernization of the customs union agreement remains a key priority of EU-Turkey relations and calls on the Council of the EU to finalize its work on the EC's proposal to begin negotiations with Turkey regarding the upgraded bilateral trade framework. "This will allow negotiations to begin regarding an important agreement that, if applied to all EU member states, would unleash still untapped potential in EU-Turkey trade and economic relations," the EC report stated.

Turkey is the only country outside of the bloc that has a customs union agreement with the EU. The agreement, penned in 1996, does not include the agriculture, services or public procurement sector. Therefore, Turkey and the EU have started to work on the technical framework for the update of the customs union agreement since earlier this year. The negotiations, which will last for about two years, are planned to be finalized at the end of December 2018.

Turkey has recently warned the EU that using the customs union update as leverage in the conflict would only go against its own interests. "Looking at it in a structural context, the customs union issue is not a one-sided request from Turkey. Using the agreement's potential update as political leverage goes against the EU's interests," EU Minister Çelik said last month. He asserted that the bloc needs success stories such as the customs union agreement update. Ties between Ankara and Berlin have been strained since the defeated coup attempt, as Turkish leaders slammed Germany for turning a blind eye to outlawed groups, such as the Gülenist Terror Group (FETÖ) and the PKK, activities within its borders, while they remain hostile to Turkey. PKK is also listed as a terror group by the EU, the United States, and Turkey. *Contributed by Mehmet Solmaz from Brussels