MEPs line up to bash Turkey, lay out list of new demands for Ankara 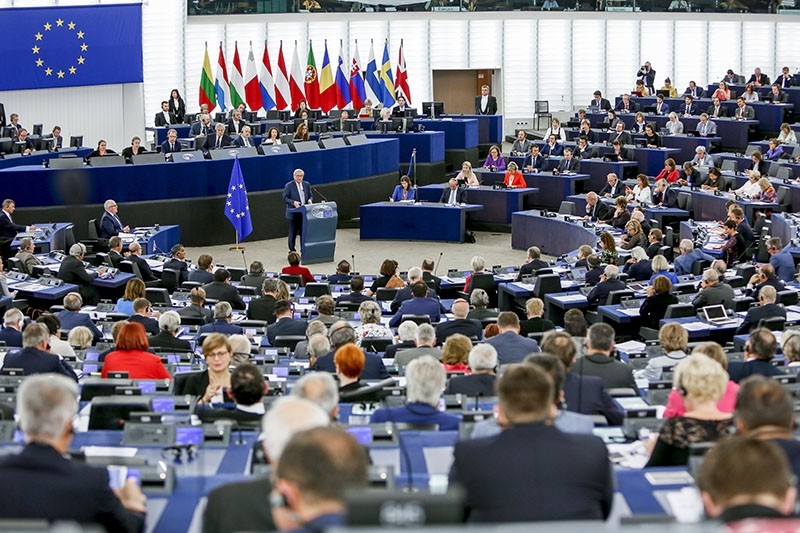 The European Parliament recently held a plenary session to discuss relations with Turkey. Members of European Parliament articulated anti-Turkey sentiments during the meeting, which focused on issues surrounding Turkey's purchase of S-400 missile defense systems ordered from Russia, the updating of the Customs Union agreement and recommendations for economic sanctions.

During the meeting, in which the European Neighborhood Policy and Enlargement Negotiations Commissioner Johannes Hahn gave opening and closing remarks, a number of members of the parliament accused the European Commission and the European Council of going easy on Ankara.

Speaking highly of the outlawed PKK's activities in Syria on every occasion, British member of the European Parliament Charles Tannock claimed that Turkey's foreign policy contradicts EU policy and goes against Western thought on the matter.

"Recently, we witnessed [Turkey's] purchase of the S-400 missile defense system from Russia for $2.5 billion. This decision not only disregards the tension between Russia and the West but also contradict the policies of the EU on Syria. Turkey's operations launched against the [PKK's Syrian offshoot the Democratic Union Party] PYD is another instance. Also, they are pestering [Greek] Cyprus over oil exploration activities being conducted in their own territorial waters," Tannock said.

During a meeting in Ankara yesterday, President Recep Tayyip Erdoğan said that Turkey will continue to take its own security measures, dismissing Western concern over the NATO member's agreement to procure an S-400 air missile defense system from Russia.

"They went crazy because we made the S-400 agreement. What were we supposed to do, wait for you? We are taking and will take all of our own measures on the security front," President Erdoğan said.

Furthermore, commenting on German Foreign Minister Sigmar Gabriel's remarks that Germany had put the majority of its arms exports to Turkey on hold amid growing tensions between the two countries, Foreign Minister Mevlüt Çavuşoğlu deemed Gabriel's words as "inappropriate for a diplomat," adding that such rhetoric will only motivate Turkey to bolster its own defense capabilities and the local arms industry.

'We should not export a single weapon to Turkey'

Claiming that Erdoğan's words needed to be met with a harsh response from Europe, German MEP Ska Keller provided her list of recommendations to the EU, saying the bloc has "an instrument [for use] against Erdoğan" that will not wear down the opposition, referring to the enlargement of the Customs Union.

She also called for an arms embargo being placed on Turkey for arms distributed from the EU.

"Although Turkey is in a war [with the PKK], EU member states currently make arms sales to Turkey. Let alone loads of arms, even a single weapon should not be sent there," she said.

'Dialogue cannot be maintained unless those under arrest are released'

Alexander Graf Lambsdorff, the deputy chairman of the Alliance of Democrats and Liberals for Europe, contended that 77 percent of Europeans are against Turkey's entry into the EU, adding that the commission must take steps to suspend the country's membership negotiations as soon as possible.

"Many issues can be discussed but dialogue cannot be maintained unless those under arrest are released," Lambsdorff said, adding that he would not make any other comment regarding Turkey at the European Parliament platform unless the bloc gives up on Turkey's accession.

'Turkey ridiculed the EU with its travel warning'

Renate Sommer, a member of the Christian Democrats, claimed that the European Council and the European Commission did not take an anti-Turkey stance, asserting that they are waiting for the crisis to pass.

"The EU is ridiculing itself in the same way that the travel warning issued by Turkey for Germany is taking a jibe at the EU. It is clear that we cannot currently update the Customs Union agreement and we need to explain this to the Turkish public very clearly: They need us more than we need them. On the other hand, imposing economic sanctions on the country might also work," Sommer said.

'The EU is today's sick man'

French member of European Parliament Edouard Ferrand, who blatantly accused Turkey of aiding terrorist groups, said the negotiations with Ankara should not have been launched in the first place, adding that the bloc should rather look for different ways to forge a relationship with Turkey, calling the latter an "important country."

"A hundred years ago, we called Turkey the sick man of Europe but I think today's real sick man is the EU. Negotiations with Turkey will never produce any result as [the bloc] went astray. You [the EU] wasted both Turkey's time and your own with these senseless negotiations," Ferrand said.

Calls to bring PKK, PYD to the table for talks

Polish MEP Janusz Korwin-Mikke said, "There is a new Kurdistan on the Turkish border and the Turkish army is poised for an attack. The EU must impel Turkey to reach an agreement [with the PYD].

Meanwhile, Greek Cypriot member of European Parliament Neoklis Sylikiotis called on the EU to force Turkey to recognize Greek Cyprus and to come to the reconciliation table with the PKK.

"If nothing changes, then the Customs Union should not be updated," Sylikiotis said.

Angel Dzhambazki argued that Turkey's EU candidacy is unnecessary as the country is not a European one in terms of its history, culture or traditions.

"My main question is: When will we impose sanctions on Turkey?" Dzhambazki asked.

German MEP David McAllister also defended his call for economic sanctions against Ankara, stating that, "The EU must, by any [possible] means, not update the Customs Union agreement."