Fed up with anti-Turkish rhetoric, German Turks unlikely to go to polls 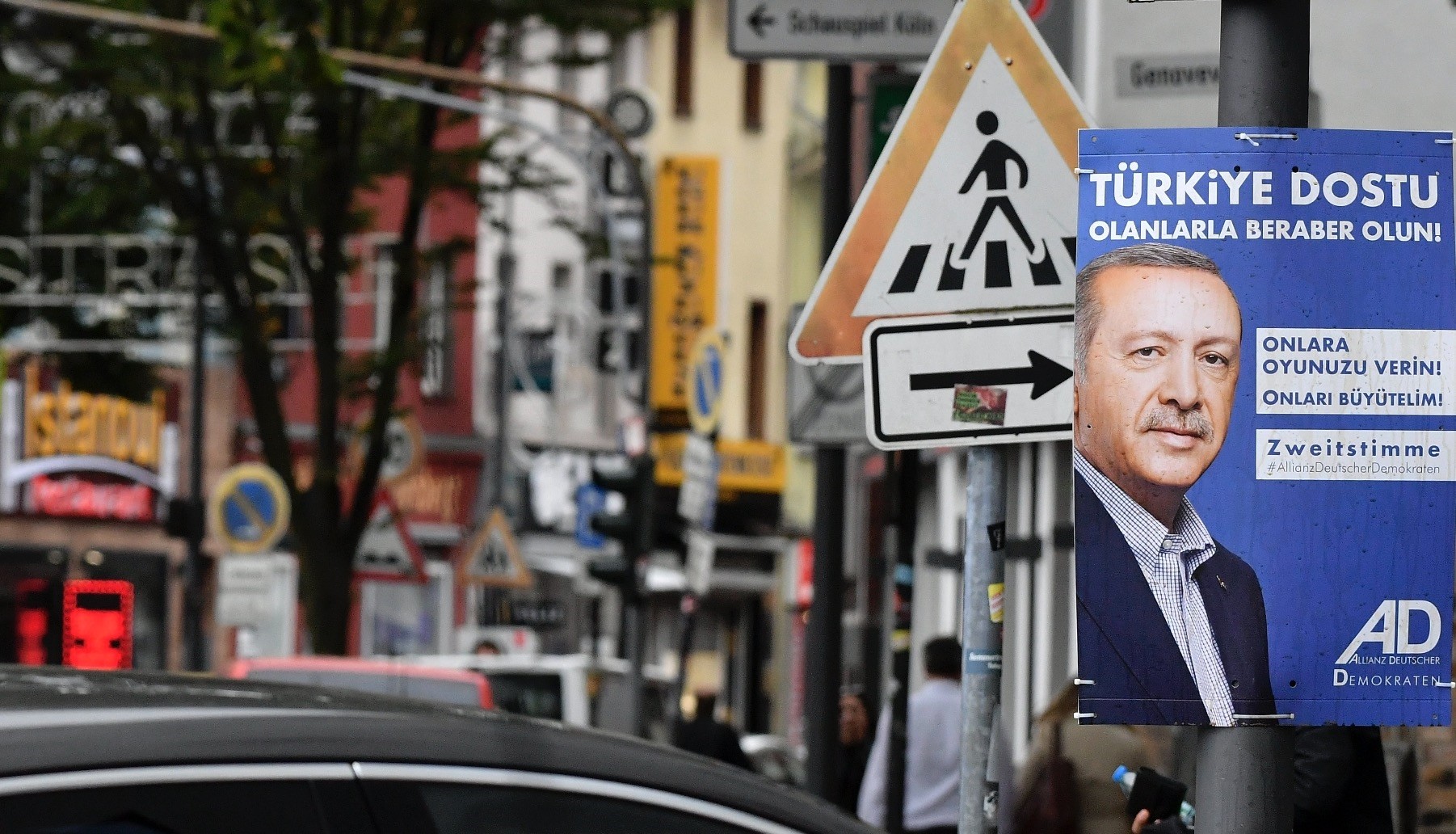 A campaign poster of the Alliance of German Democrats (ADD) party for the German election 2017 shows portrait of President Recep Tayyip Erdou011fan and a slogan that reads u201cStand together with Turkeyu2019s friends. Give them your votes! Help them grow!u201d
by Ayşe Betül Bal Sep 16, 2017 12:00 am

Germany's Turkish community is apathetic for the federal elections scheduled on Sept. 24 due to anti-Turkish rhetoric embraced by political parties from all wings

It was an ordinary day in the German city of Koblenz, known for its high population of Turkish nationals. For 42-year-old H.Y., waking up early in the morning to go to the factory where he works in Koblenz means leaving the house without watching the morning news and without hearing the details of those unwanted tidbits of information again. Anxious about the future of his family in Germany during a time when nearly all of the speeches given by German politicians are full of anti-Turkish rhetoric, H.Y. is trying to find the answer to a difficult question that weighs on his mind every morning on his way to work: Who will he vote for in the upcoming German elections? For H.Y., each and every politician is the same, using anti-Turkish rhetoric to win potential votes in an appalling version of German political strategy. For this reason, H.Y. is not willing to vote for any party in Germany, saying, "because of the fact that German politicians have an anti-Turkish attitude, I will not participate in the elections."

Turks in diaspora looking for a way out

H.Y. is not the only one with a big question mark hovering over his head. Many other Turkish people living in Germany share his concerns about the statements made by politicians, which fuel confusion among Turkish-German voters on whether they should participate at the polls or not. Struggling to understand the present situation in Germany, diaspora Turks are desperately looking for a way out, because the vote they cast will not only affect them but also their children's future.

The tension between Berlin and Ankara has been growing more and more in recent months, especially since the failed coup attempt on July 15, 2016, in Turkey. Such developments as the German government's siding with opposition voices over the April 16 referendum in Turkey have caused the relationship between Ankara and Berlin to grow even more complicated. Ultimately, the tensions have morphed into an ongoing battle of words between Turkish President Recep Tayyip Erdoğan and German Chancellor Angela Merkel, casting a gloomy shadow over the German election campaign while causing a conundrum on how Turkish citizens in Germany will respond to the upcoming election on Sept. 24.

Another Turkish citizen who has lived outside of her homeland for many years, 57-year-old Ayşe Albayrak, has similar questions on her mind. Working as the first Turkish nurse in Germany's Rheinland Pfalz, she believes that "the majority of Turkish citizens will not vote for the leading parties" in the upcoming German elections.

Albayrak expressed that the statements of Chancellor Merkel, and other politicians, have had an effect on her perspective of German politics, saying: "I hear awful things about my homeland every time I turn on the television." Underlining that Turkish-German citizens living in Germany do not have a problem with their German neighbors in the country, Albayrak said, "I have had German friends for 30 years and they are all good to me. However, when it comes to the politics, they do not like Turkey and they argue strongly that Erdoğan has to leave his position; even when they clearly have been provided limited information about the topic."

In the context of Germans' limited perspective on Turkish politics, she pointed to the fact that the speeches given by German politicians are more about Turkey being dragged into the darkness than they are about the state of Germany itself, causing Turkish-German voters to think that they are no longer welcome in Germany, where politicians don't hesitate to throw Turkish minorities under the bus in order to get the votes of the majority.

As a matter of fact, people from a working-class background, like factory worker H.Y., are expected to vote for Germany's Social Democrat Party (SDP), when the latest election scale of Germany is examined. In recent years, citizens in Germany with Turkish roots have always had a tendency to side with the left-wing or center-left, since they have a working-class background and parties that are close to the left - such as the SPD - take a more positive stance toward immigrants.

According to research conducted by Data4U, a market and media research institute based in Germany, the general election results from four years ago indicated that 64 percent of Turkish voters in Germany had voted for the SDP, compared to 12 percent who voted for the Greens. Since then, however, anti-Turkish rhetoric and current events have caused the political situation to evolve, leaving many people confused.

For one working class voter in Germany, 43-year-old M.A.U. who works as a plumber in Koblenz's Bendorf, "Politicians from both conservative and left-winged parties are against foreigners in Germany, more specifically Turks, and they are misleading their electors, the public. I will not vote in the upcoming elections." Remarking that Germans have not grown accustomed to Turkish culture or Turkish traditions over many years, M.A.U. added: "Since the very first generation of Turks migrated to Germany in the 1960s, we have been living according to our religion of Islam. They cannot expect us to live by the laws of Christianity but this should not be a problem since we speak German and we respect the rule of law in Germany. I was born and raised here, I work a regular job, pay my taxes and have integrated into daily life."

Another concerned citizen, Turkish taxi driver Bahaddin Aydın, said: "I do not think that I will be voting for the SPD. The ruling parties' opposition against Erdoğan and Islamophobia, as well as ethnocentrism, are all effective in spreading Turkish diaspora."

German Turks become closer to Ankara in response to diaspora

As the rhetoric in German political speeches becomes more anti-Turkish, it becomes increasingly clear that their chance to come into solidary power is decreasing. By portraying the Turks in Germany as supporters of Erdoğan, German politicians are trying to quell the existing achievements of minorities, namely the Turks, portraying them instead as scapegoats. One Turkish insurance adjuster living in Germany, who spoke on the condition of anonymity, said that "Trying to isolate Turkish voters by labelling them as such is a political tactic of exclusion that will cause a portion of Turkish voters, namely those who distance themselves from Erdoğan and Turkey's existing government, to become closer to Ankara in response to Germany."

Assistant professor at Istanbul Medeniyet University, political scientist Dr. İsmail Ermağan, who has lived in Germany and holds a master's degree from Hamburg University and a doctorate in political science from the Max-Weber College at the University of Erfurt, evaluated the present state of Turks in Germany and the various possibilities that could come from the upcoming election. Indicating that people are not pleased with the fact that the government of the country they live in has been engaged in a political fight with their homeland, Dr. Ermağan said: "Even though there are not many alternatives, it seems that the SPD, elected by 60 percent of Turks in Germany, is now going to see significantly less numbers in terms of voters on Sept. 24. The reason for this is that chancellor candidate Mark Schulz has committed himself to stopping Turkey's EU accession negotiations, alongside the CDU and The Greens." Saying that German citizens with Turkish roots will "either vote for local parties or not go the polls at all," Ermağan also speculated over the possibility that "German citizens with a high sympathy for the People's Democratic Party [HDP] in Turkey, who criticize the politics of the Turkish government, will support The Greens or Schulz's party [in the upcoming election]."

According to the Turkish-Germans who spoke with Daily Sabah, the reason that German citizens with Turkish roots have kept their distance from both conservative and left-winged parties is not due to the fact that conservative parties have a Christian word in their name or that left-winged parties are opposed to their more conservative world views. To the contrary, it is because they both employ anti-Turkish rhetoric every now and then.