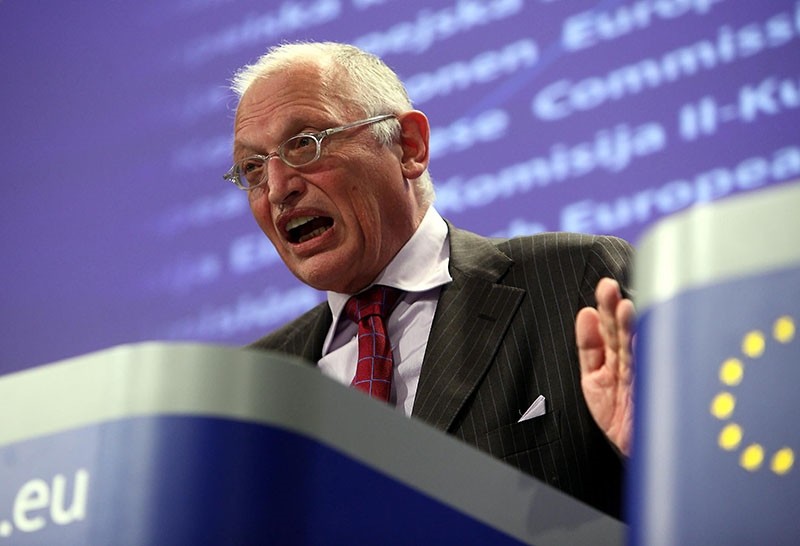 This file photo shows former Vice-President of the European Commission and EU commissioner in charge of enterprise and industry, German Guenter Verheugen gives a news conference at the EU headquarters in Brussels, Belgium, Oct. 22, 2009. (EPA Photo)
by Anadolu Agency Sep 18, 2017 12:00 am

The European Union's former enlargement chief has criticized German political leaders for calling for an end to Turkey's EU membership negotiations ahead of the country's federal election on Sunday.

Gunter Verheugen, in an exclusive interview with Anadolu Agency, said: "I think both Chancellor Angela Merkel and her rival Martin Schulz are aware that Germany cannot simply call of Turkey's EU membership talks.

"For that to happen, all other EU members should back such a move. But this is not the case."

Merkel, who is leading her Christian Democrats into Sunday's vote, has come under enormous pressure from political rivals to sharpen her tone towards Turkey due to political tensions between Berlin and Ankara.

She has promised to raise the possibility of freezing or ending Turkey's membership talks at an EU leaders' summit next month.

Verheugen, who was EU Enlargement Commissioner from 1999 to 2004, also voiced concern over growing anti-Turkey rhetoric in the German election campaign.

"This has two reasons: The dramatic deterioration of relations between Germany and Turkey in the last two years…and the deep-rooted fear [of] Muslim immigration among some Germans," he said.

However, Verheugen underlined that ending Turkey's EU membership talks would not help resolve political disagreements between European capitals and Ankara.

The prominent German politician proposed an alternative policy, which he said could also address European concerns on recent developments in Turkey.

"I advise the next German government to develop a credible and long-term Turkey policy together with its EU partners," Verheugen stressed.

"The EU should make it perfectly clear that Turkey's EU membership is a strategic priority for the union, not something that one can lay aside," he added.

Verheugen underlined that only a credible EU membership prospect could help advance democracy and the rule of law in Turkey.

Ties between Ankara and European capitals have been strained since the defeated coup attempt in Turkey last year as Turkish leaders slammed European countries for failing to show strong solidarity with the government against the attempted military takeover.

Turkish politicians have also criticized Germany and several other European countries for turning a blind eye to outlawed groups and terrorist organizations hostile to Turkey.

European officials, however, voiced concerns over the rule of law and human rights issues amid widespread investigations by Turkish authorities into the Gülenist Terror Group (FETÖ) which orchestrated the defeated coup attempt.

FETÖ and its U.S.-based leader Fetullah Gülen are also believed to have been behind a long-running campaign to take control of the state apparatus through the infiltration of Turkish institutions, particularly the military, police and judiciary.

Turkey's EU membership negotiations reached a stalemate in 2007 due to the Cyprus issue and the opposition of several EU governments to Ankara's full membership.

The German Chancellor and her Christian Democrat (CDU/CSU) bloc have long-opposed Turkey's full EU membership but supported the continuation of accession negotiations in an open-ended way, something which was promised to Ankara before the CDU/CSU came to power in Germany in 2005.

Despite the German government's recent move to adopt a harsher tone towards Turkey, so far only Austria has openly backed freezing Turkey's EU membership talks.

Any decision to terminate Turkey's membership talks would require unanimity among all EU member states, something seen as unlikely by diplomats as most member states were opposed to such calls earlier this year and insisted on maintaining dialogue with Ankara.

The EU can temporarily suspend negotiations with Turkey if a majority of its member states back such a proposal, which can be initiated by the European Commission or by one third of member states.