Nazi-leaning AfD set for Bundestag while some Germans express shame 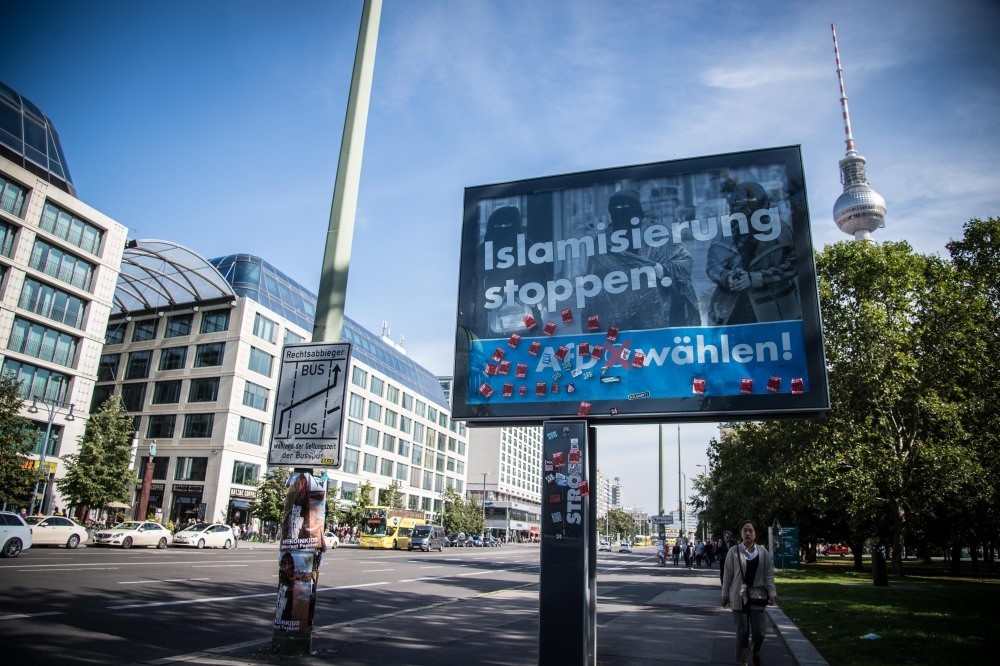 Utilizing the unprecedented migrant crisis in the summer of 2015, the AfD registered a record 15 percent vote in the polls
by Yunus Paksoy Sep 20, 2017 12:00 am

Germans fear that the rise in support for the far-right AfD ahead of the Sept. 24 federal elections will lead to a resurgergence of fascist tendencies, a story of the past that has haunted the German society for decades

May 8, 1945 marked the end of a blood-soaked and calamitous era as Nazi Germany was pushed deep into the dark cells of history following World War II. After having enjoyed decades of prosperity, fascism-free Europe may once again be dragged into far-right populism since the Nazi-leaning Alternative for Germany (AfD) is projected to garner around 10 percent of the vote in the upcoming Sept. 24 elections, sending some 70 lawmakers into the Bundestag. Sitting across parliament exactly 72 years after national socialism collapsed, Bastian Fischer fears a possible return to those times.

The insuppressible rise of the far-right AfD over the course of the last few years has perturbed much more than a few people. Fischer is unquestionably within that group.

"It is a shame," Fischer, 43, said about what is highly likely to take place following the Sept. 24 elections. Well aware of the fact that the AfD will send around 70 lawmakers to parliament, leaving Fischer lamenting for the future of his country. "They [the AfD] are trying to make people forget what this parliament went through due to far-right and fascistic ideas," he said, pointing his finger at the Bundestag.

The far-right party is relatively new. Utilizing the unprecedented migrant crisis in the summer of 2015, the AfD registered a record 15 percent vote in the polls. Even though German Chancellor Angela Merkel boasts the curb in migrants, the AfD has still emerged as the third-strongest party of the country in some surveys.

"Islam is not part of Germany," the AfD said in its manifesto for the elections. The Islamophobic attitude is not the only eerie aspect of the young party. Racism fits right into the AfD, as well. AfD deputy leader Alexander Gauland said last month that German Integration Minister Aydan Özoğuz of Turkish origin should be "disposed of" to Turkey.

One feels the Islamophobic and xenophobic crux of the AfD on the streets of the German capital, as streets are emblazoned with gigantic, yet controversial, placards. "Stop Islamization! Vote for the AfD," reads a banner right across from the Berlin Cathedral, which draws millions of Muslim tourists each year.

In spite of the worrisome statements of AfD authorities and the fear taking liberals of Europe by storm, millions of Germans are set to vote for the far-right party. Yet, not every German is on pins and needles.

"The country has developed a strong democratic foundation since the end of a war, so it will be alright. If the main principles of democracy and justice are protected by the system, it doesn't make a difference which party comes to parliament," Metin Özdemir, a student studying in the capital said.

It may be argued the far-right AfD is not as atrocious and harrowing in mind as depicted in the media after all. However, leading indicators point to a whole contrasting reality. Can Germany give the AfD a try? Fischer vehemently contests the idea. "I can try a white beer. It does not sound like such a bad idea, yet giving a party a try and sending it into parliament for four years? No, thanks," Fischer said.

Social Democratic Party (SPD) Chairman and chancellor candidate Martin Schulz seems to be on the same page. "This party is not an alternative for Germany. It is a shame," he said. Schulz also contended that main AfD figures are racist, saying: "The top of the AfD is racist. There cannot be any compromises with it." However, Schulz's party is only separated from the AfD by a 10-point difference in most polls.

Millions of Germans may be perturbed by the rise of the AfD, yet it will take an unprecedented miracle to keep it out of the Bundestag this Sunday. In fact, the party may spearhead the parliamentary opposition parties.

If Chancellor Angela Merkel's Christian Democratic Union (CDU) renews its coalition partnership with the SPD, which is the most likely scenario as of today, the AfD may turn into the biggest opposition party. It would also chair the powerful budget committee and open the general debate during budget consultations, giving prominence to its alternatives in government policies.

While German politics is engulfed by the vexing projections regarding a Bundestag with scores of Nazi-leaning populist AfD politicians, the sour relations with Turkey also linger. The already strained ties may never heal if Merkel's CDU and its new coalition partner or partners fall prey to the alarming ideas of the AfD.