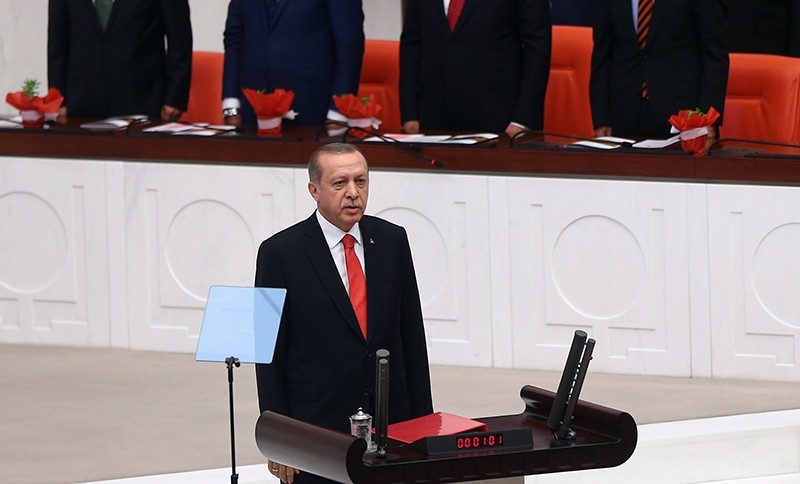 The European Union needs to grant full membership to Turkey if it really wants to make a leap forward by launching an economic and cultural expansion initiative, President Recep Tayyip Erdoğan said Sunday, as he criticized the bloc for delaying the country's accession.

Speaking at Parliament's opening ceremony for the third legislative session, Erdoğan criticized the EU for failing to cooperate with Turkey on a number of issues, including the fight against terrorism.

"In reality, we actually no longer need EU membership, but if the EU wants to make a leap forward there is only one way and that is by granting Turkey membership to launch a genuine economic and cultural expansion," the president said, adding that Turkey will be happy to contribute to the bloc's future.

Criticizing the lack of support from EU states against terror group activities across European cities, Erdoğan said it has been a great disappointment for Turkey not to have the EU by its side in counterterrorism.

"The EU leads the ones that have disappointed Turkey in its counterterrorism efforts. We are extremely bothered by the tolerance of those standing against Turkey's accession to the European Union openly, without even hiding it to terror groups," the president added.

Erdoğan continued by saying it will not matter for Turkey if the EU does not grant the country membership and that the country will continue to proceed as usual.

Turkey-EU ties were first established in 1959, and the framework was established in 1963 in the Ankara Agreement. Ankara applied for European Economic Community (EEC) full membership in 1987 and accession talks began in 2005. However, negotiations hit a stalemate in 2007 because of disagreements on the Cyprus issue. The German and French governments have been opposed to the country's full EU membership.