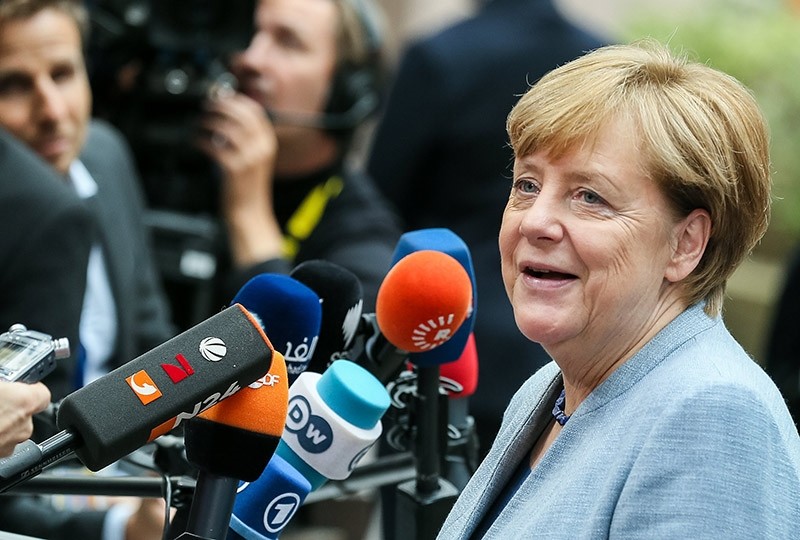 German Chancellor Angela Merkel answers to journalists' questions as she arrives on the first day of the European Council Meeting in Brussels, Oct. 19, 2017 (EPA Photo)
by Daily Sabah with AA Oct 19, 2017 12:00 am

German Chancellor Angela Merkel has suggested reducing the EU's pre-accession funds to Turkey instead of calling for an end to Ankara's EU membership process.

Speaking ahead of a key summit of EU leaders in Brussels on Thursday, Merkel announced a finely-tuned position on future ties between the EU and Turkey.

"I would advocate for restricting EU pre-accession funding for Turkey," Merkel said, expressing dismay at the continued detention of around a dozen German citizens in Turkey on suspicions of aiding terrorist organizations.

Merkel said she had demanded a discussion among EU leaders on the human rights situation in Turkey and the future of Ankara's EU membership process.

However, despite calls by major German parties to end Turkey's EU membership talks, Merkel avoided bringing such a proposal to the agenda. Merkel underlined that EU member states should preserve their unity and take a unified position on Turkey.

Despite calls by German social democrats and liberals to immediately halt Ankara's EU membership talks and freeze 4 billion euros ($4.68 billion) in pre-accession funds, a majority of EU member states turned down such proposals and backed dialogue with Ankara.

German Chancellor Angela Merkel promised the debate with EU leaders during her re-election campaign last month to discuss ending accession talks with Ankara, a position she unexpectedly backed when her main rival took a hard line on the issue.

While criticizing Ankara over disagreements on issues of democracy and the rule of law, Merkel praised Turkey's efforts for Syrian refugees, and reaffirmed Germany's commitment to the EU-Turkey refugee deal.

"Turkey has made an exceptional contribution for the refugees," she stressed, calling on EU member states to honor their commitments under the deal.

"We should comply with our promise," Merkel said, adding that this funding was used to improve the living conditions of refugees.

Merkel has long been a key supporter of the EU-Turkey agreement clinched in March 2016, which is aimed at discouraging the irregular migration through the Aegean Sea by establishing stricter measures against human traffickers and improving the conditions of nearly 3 million Syrian refugees in Turkey.

Although the plan has successfully reduced irregular migration flows and came as a significant relief for Merkel in domestic politics, the EU has failed to timely deliver the promised funds.

According to the EU-Turkey agreement, European states have to mobilize an additional 3 billion euros in funding by the end of 2018.

Turkey hosts more Syrian refugees than any other country in the world. Ankara says it has spent more than 20 billion euros ($24.1 billion) from its own national resources in helping and sheltering refugees since the beginning of the Syrian civil war.

Relations between Turkey, Germany and other EU states have been strained in recent times due to a number of reasons, including the latter's indifference to Turkey's fight against terrorist groups including PKK and Gülenist Terror Group (FETÖ).

Turkey accuses Germany of harboring high-ranking FETÖ figures and soldiers linked to the coup attempt, in addition to activities of PKK and DHKP-C terrorist groups in Germany.

President Recep Tayyip Erdoğan has repeatedly said that more than 4,000 files regarding terrorism suspects were sent to Germany, but that no step have been taken to finish examining the files and deporting the suspects to Turkey.

The deal included a 6 billion euro ($6.8 billion) aid package to help Turkey care for millions of refugees hosted in the country.

The agreement also allowed for the acceleration of Turkey's EU membership bid and visa-free travel for Turkish nationals within the Schengen Area that comprises most EU states.

A year later, however, the European Parliament approved a non-binding motion to freeze EU-membership talks with Turkey, in response to post-coup investigations and recent developments in the country including measures taken within the framework of the fight against the PKK and Gülenist terror groups.