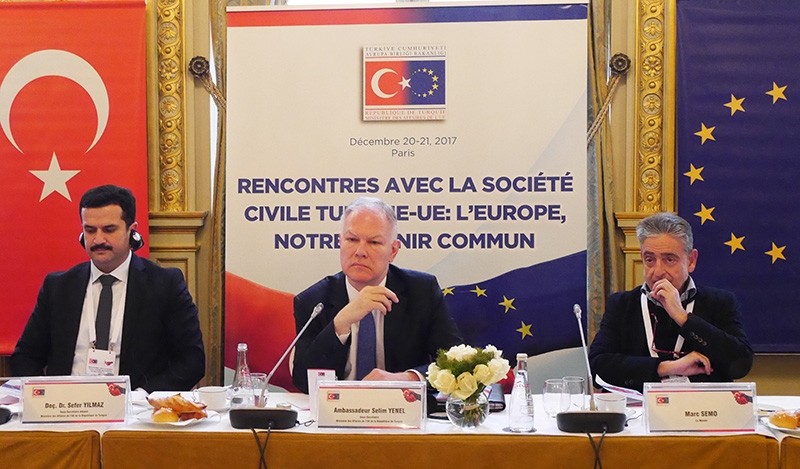 The main source of problems between Turkey and the European Union is the lack of trust and dialogue, Turkey's ambassador to the EU, Selim Yenel said Wednesday.

Speaking at the Fifth Turkey-EU Civil Society Meeting attended by numerous Turkish and European academics and representatives in Paris, Yenel said that the recent pause in bilateral contacts between the bloc and Turkey harms both sides.

The ambassador noted that issues regarding Turkey-EU relations can be summed up in three main points, including the obstacles on the way of membership, the customs union agreement and visa liberalization.

"Unfortunately there are no negotiation chapters to be opened because there is a political obstruction" Yenel said, noting that the obstacles are mainly caused by the Greek Cypriot administration.

With regards to the customs union agreement, Yenel noted that it must be immediately renewed.

Turkey is the only country outside of the bloc that has a customs union agreement with the EU. The agreement, penned in 1996, does not include the agriculture, services or public procurement sector. Therefore, Turkey and the EU have started to work on the technical framework for the update of the customs union agreement since earlier this year.

Regarding the visa liberalization process, Yenel noted that Turkey has fulfilled 67 out of 75 criteria.

The ambassador highlighted that the most significant problem on the way of EU-Turkey relations is the lack of dialogue.

"Not enough talk is being made, not enough meetings are being held" he added.

Furthermore, Yenel noted that Turkey has not been invited to the summits since 2004 as a result of the change in European politics.

"Turkey is being criticized for moving away from Europe but is Turkey really moving away or is it being forced to do so?" Yenel asked.

Turkey, which has provided significant assistance to the bloc in terms of stemming the flow of illegal migrants, applied for membership in 1987, while accession talks were launched in 2005.

In 2007, accession talks were deadlocked over the issue of Cyprus.

Turkey is required to successfully complete negotiations with the bloc in 35 policy chapters involving reforms in line with the European Union.