Turkey willing to overcome roadblocks in ties with EU 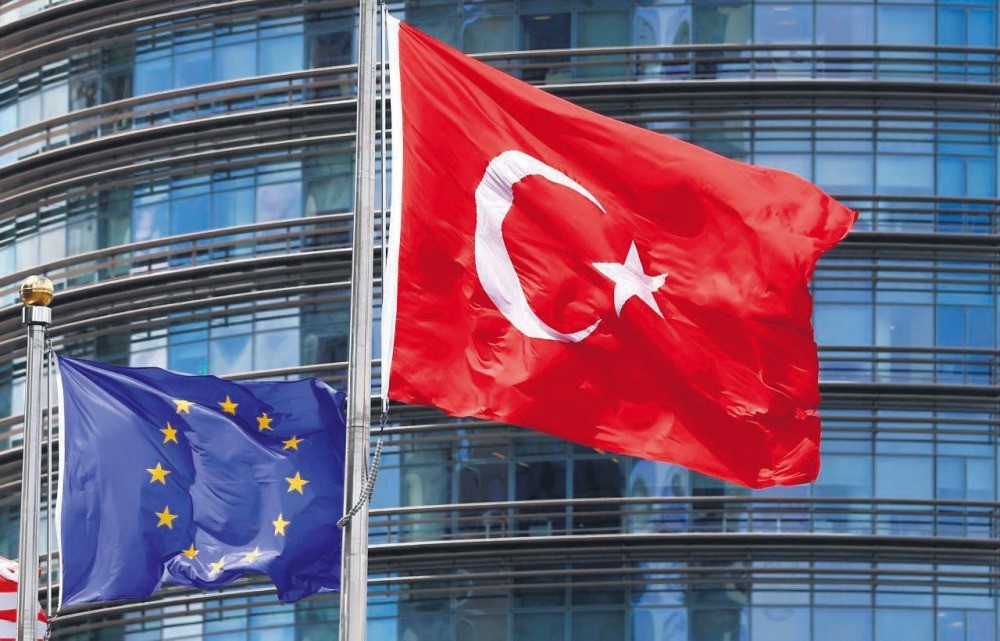 Strained Turkish-EU relations have started to normalise with both sides have showed their desire to reconcile.
by Şeyma Nazlı Gürbüz Jan 04, 2018 12:00 am

After a year full of tensions, Ankara is preparing to leave problems with the EU behind and turn a new page

Leaving the tensions of 2017 behind, Ankara says it is ready for a new period in its relationship with Brussels, as both sides have been showing a willingness to make moves to overcome problems. Speaking at a press meeting yesterday, Foreign Minister Mevlüt Çavuşoğlu said that if the EU starts to act more respectfully to Turkey, relations would be healthier. "It is not possible to come up with a solution with countries like Turkey otherwise. The Turkish public deserves this. From now on, this patronizing period has come to an end," he said, adding that the EU eventually started to understand this and should actually revise itself.

"It is not possible for relations between Turkey and the EU to be worse than last year. Thus, we can easily say that 2018 will be a better year," Emre Gönen, an academic from Istanbul Bilgi University and a columnist for Daily Sabah, said. He added that the relations, once quite good, started to worsen step by step in 2011. Citing that even Serbia and Montenegro moved faster than Turkey in the process of EU accession despite applying a year later, Çavuşoğlu said that from now on, the EU should respect Turkey. "We did not cause the problem. Since elections are behind in Europe, populist attitudes have also declined," Çavuşoğlu said, indicating that it is possible to overcome problems even with Austria in which Sebastian Kurz's far right party won the elections.

Known for his staunch opposition to Turkey, Austrian Chancellor Kurz said last week that the EU should end negotiations with Ankara concerning its long-running accession talks for membership in the bloc, asserting the country has "no place in Europe." The young Austrian leader is the head of the conservative People's Party of Austria (ÖVP) and was sworn in as chancellor on Dec. 18, 2017, after general elections in October. Çavuşoğlu also said he invited the Austrian foreign minister to Istanbul to discuss bilateral relations.

"I believe that the next few days will determine how relations will be for the next two to three years for the EU and Turkey," Gönen said, referring to President Recep Tayyip Erdoğan's upcoming meeting with French President Emmanuel Macron.

Erdoğan is expected to discuss regional and bilateral issues with Macron during his visit to Paris on tomorrow.

"During the visit, Turkish-EU relations and regional issues, particularly on Jerusalem, Syria, Iraq and the fight against terrorism, will be discussed," presidential spokesman İbrahim Kalın said in a written statement.

"France has differentiated itself from other EU states in its attitude on Turkey from the beginning. It did not take a stance as firm as Germany, for instance. It acted more rationally, basing relations with Turkey on mutual benefits," said Enes Bayraklı, a foreign affairs specialist at the Foundation for Political, Economic and Social Research (SETA). He added that in his opinion, this was a logical move. "Thus, this meeting is an important move in terms of its effect on relations with the EU."

Regarding Erdoğan's visit to France, Gönen said that the visit is very crucial since France's stance on Turkey will shed light on other EU countries.

"All Turkish-EU member relations are based on conditionality, and among these relations France has an important role. For instance, before the April 16 referendum in Turkey, Çavuşoğlu managed to hold a rally in France, but could not in other European countries," Gönen said. He added that France has the largest population of Turkish-origin citizens in Europe after Germany.

Before the April 16 referendum, Turkish authorities' demands to hold rallies were prevented in many European countries. The Netherlands also handed a flight ban to Çavuşoğlu, while barring Family and Social Affairs Minister Fatma Betül Sayan Kaya from entering the Turkish Consulate in Rotterdam in March. Turkish-Dutch citizens outside the consulate were beaten by police and attacked by dogs.

Gönen added that France's stance would also be effective concerning the countries around France since they would follow a parallel line.

Last week, Erdoğan said that Ankara has no problems with Berlin, Amsterdam or Brussels. He said that there might be official visits to EU member states ahead as there have been positive signals and easing of strained relations between Ankara and EU countries.

"I always say it. Our aim is to minimize enemies and increase friends. We do not have any problems with Germany, the Netherlands or Belgium. Quite the opposite, the leaders there are my old friends," the president said in response to a question on remarks by German Foreign Minister Sigmar Gabriel and Dutch Prime Minister Mark Rutte encouraging positive relations with Turkey. Rutte said on Dec. 23, 2017, that the "cold relations" between the Netherlands and Turkey should be fixed. "I think it would be good if relations with Turkey improved. Turkey is a NATO partner," he told Dutch daily De Telegraaf in an interview.

Relations between Ankara and its EU allies have been strained, particularly since the July 15 coup attempt last year. Ankara says there has been a lack of support against the Gülenist Terror Group (FETÖ) and its members, many of who have sought asylum in Europe. In addition, the free movement of PKK sympathizers has also led Ankara to lose trust in its European allies. The PKK is recognized as a terrorist group, but its supporters are able to hold rallies in European cities freely as well as conduct recruitment activities and collect financial support. Erdoğan added that Turkey wants to have good relations with the EU and its member states.

According to Bayraklı, there are two issues that are crucial for Turkey and can be dealt with in the coming days: The revision of the customs union agreement and liberation of the visa regime.

"The modernization of the customs union agreement is a vital issue for Turkey that should be handled immediately," Gönen said.

"It is the most serious weapon the EU holds against Turkey, and if this agreement breaks, this would also affect our business with other states," he said, explaining that most of Turkey's industry and foreign trade is with Europe.

Ankara's customs union agreement with the EU came into force in 1995. Both Turkey and the EU seek to expand the scope of the agreement, which would have positive effects on mutual trade relations in various industries. However, Turkey's worsening relations with Germany have crippled the process.

German Foreign Minister Gabriel also said that the EU should seek new ways of dealing with Turkey. According to Gabriel, the EU needs to find alternative ways of creating closer cooperation and partnerships with both Turkey and Ukraine as both countries are unlikely to join the 28-member bloc in the foreseeable future. The German foreign minister presumed that such a model could lead to a "new, closer form of customs union" between Turkey and the EU. Gabriel and Çavuşoğlu are expected to meet on Jan. 6 in Germany to discuss bilateral relations.

Gabriel also said that there were "clear signals of alleviation [of the tensions]" and that steps "in the right direction" are being taken after the release of German nationals who were arrested in Turkey amid recent counterterrorism investigations. "We are making progress, step by step," he said.

In Gönen's opinion, the initial problem waiting to be solved is that of bilateral relations. "There is no way for Turkey to have permanent bad relations with Germany. It is not sustainable for either side. Thus, they have to forget the past and move on with small steps."