Ankara will seek to restore ties with Vienna at Istanbul meeting 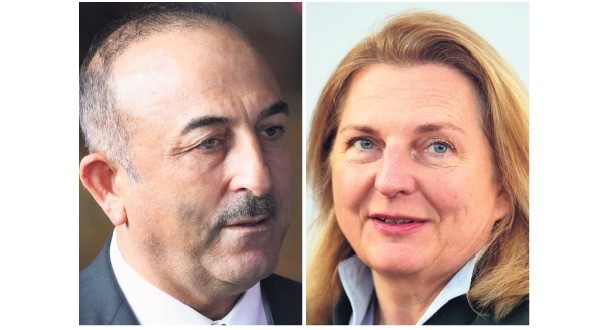 Following a recent warming of relations between Ankara and Berlin, Turkey is now looking to restore ties with Austria, diplomatic sources have told Daily Sabah.

Çavuşoğlu has invited Kneissl to Istanbul's Büyükada, the largest of the Princes' Islands, and the visit is expected to take place over the coming days, sources said.

Over the weekend, Çavuşoğlu visited Gabriel's hometown of Goslar where Gabriel offered him Turkish tea at his personal residence.

Following the meeting, the two ministers delivered positive messages, saying that the current disagreements could be overcome through dialogue.

The meeting was a type of "hometown diplomacy," and Turkey is now looking to improve relations with Austria using "carriage diplomacy."

Diplomatic sources said Kneissl spent a part of his childhood on Istanbul's Büyükada, thus Çavuşoğlu is planning to host a meeting there. Given there is no motor vehicle on the island, Çavuşoğlu and Kneissl were expected to use horse carriages as transport.

Kneissl, a former diplomat and lecturer, is known for her expertise on the Middle East.

Turkish-Austrian relations soured last year due to unfriendly statements from Austrian politicians and their support for the PKK terrorist organization.

Known for his staunch opposition to Turkey, Austrian Chancellor Sebastian Kurz recently said the European Union should end membership negotiations with Ankara, saying the country has "no place in Europe."

"This unfortunate and short-sighted statement in Austria's new government program, unfortunately, confirms our concerns about a political movement based on discrimination," said a Foreign Ministry statement.

Commenting on Turkish-Austrian relations, Çavuşoğlu said Turkey would like to overcome problems with Austria.

"We did not cause the problem. Since elections are now behind Europe, populist attitudes have also declined," Çavuşoğlu said on Jan. 3, indicating that it was possible to overcome problems even with Austria, where Kurz's far-right party won the recent elections.

Upon an Austria request, Çavuşoğlu and Kneissl discussed bilateral relations on Dec. 18.