Normalization of Turkish-EU relations hit by lack of mutual trust 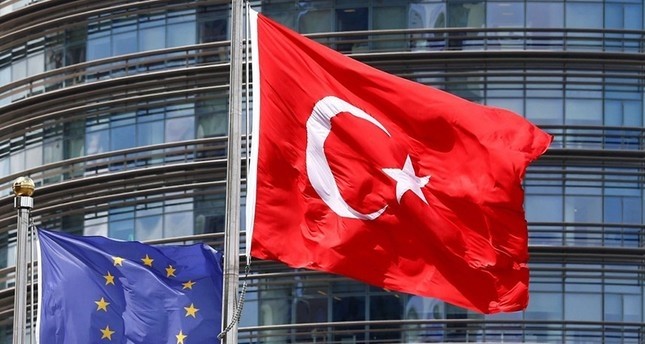 Turkey has recently started to rebuild its relations with the European Union as it engages in dialogues with key EU states like Germany and France while attempting to leave tensions behind.

The reconciliation process, however, has been interrupted by conflicting remarks from EU high-ups, giving way to a lack of trust between Ankara and Brussels.

European Commissioner Johannes Hahn, responsible for the enlargement, said relations with Turkey should be more realistic.

Speaking to dpa, Hahn said instead of full membership, Turkey could have a "strategic partnership" with the EU, something also suggested by French President Emmanuel Macron, and hoped other members of the EU would also discuss the issue.

Regarding Turkey mending its relations with some EU states, especially Germany, Hahn said, "Sweet words alone are not enough," and added, "The important thing is the facts, and the facts have not changed yet," as he criticized the imprisonment of journalists and academicians in Turkey.In his recent meeting with German Foreign Minister Sigmar Gabriel, Foreign Minister Mevlüt Çavuşoğlu acknowledged that the "difficulties and disagreement" with Germany needed to be solved through dialogue and cooperation.

About Turkey's EU membership bid, Çavuşoğlu said there was a disagreement with Gabriel regarding the country's accession to the bloc, but the German foreign minister and Çavuşoğlu agreed to do everything possible to improve Berlin and Ankara ties.

President Recep Tayyip Erdoğan's recent visit to Paris to meet his French counterpart Emmanuel Macron was also seen as a big step toward normalization of ties with the EU.

On Turkey's relations with the EU, Macron said ties between Ankara and Paris were based on "dialogue and a common approach," while keeping disagreements in mind.

"No new chapters will be opened in the EU accession talks," Macron added.

In response, Erdoğan said: "Turkey, unfortunately, has been waiting for 54 years. There is no country like Turkey in the EU. The EU isn't able to provide us with any reason [for this wait]."

Although it was one of the first countries to join the European Economic Community (EEC) in 1959 and applied for full EU membership in 1987, Turkey still has candidate country status. In the meantime, many countries in Europe have been accepted as EU members, despite applying much later than Ankara.

Official accession talks with Turkey began in 2005. However, negotiations stalled in 2007 due to objections from Greek Cypriot administration concerning the divided island of Cyprus, as well as opposition from Germany and France. Since then, only one of 16 opened chapters of the Copenhagen criteria have been fulfilled and closed.

In an interview with the Eastwest magazine on Dec. 30, 2017, Çavuşoğlu underlined the conflicting attitude of the EU and said the 28-nation bloc does not fully understand the challenges Turkey faces, leading to a lack of mutual trust between the two sides.

The foreign minister also said in order to "re-establish a trusting relationship," the EU should "honor its promises" on major issues, such as the modernization of the customs union, visa liberalization and the full disbursement of financial help promised to cover the costs of Syrian refugees in Turkey.

In contrast to Hahn's comments, European Commission President Jean-Claude Juncker recently told the Deutsche Welle Turkish that the EU wants to have a close, joint partnership with Turkey, adding that restoring ties with Turkey also depends on Ankara.

He said the EU should not turn its back on Turkey.

"Instead of turning our backs on Turkey, we should redevelop diplomacy and good relations, and maximize our trust in the south wing as much as possible," he said.