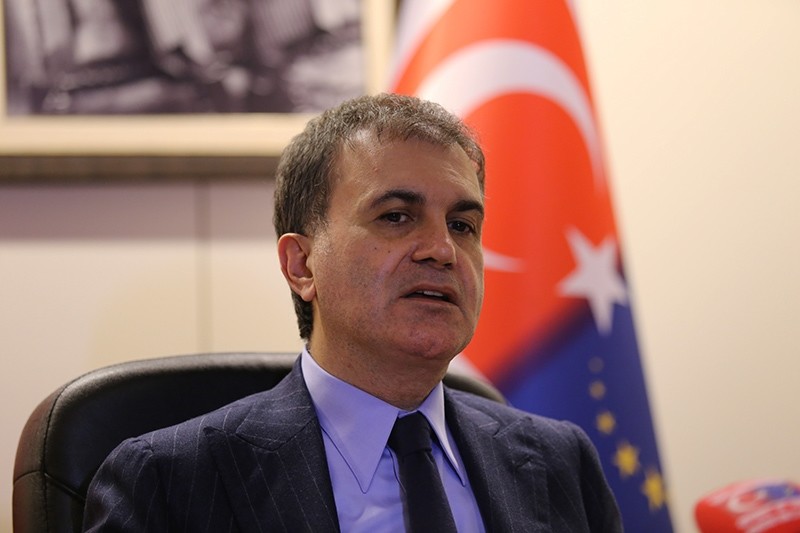 Ankara has completed preparatory work for visa liberalization with the European Union and submitted the documents, expecting new momentum in ties if it is implemented.

"Turkey has fulfilled all obligations laid out before it. In our opinion, all 72 criteria have been met," EU Affairs Minister Ömer Çelik said yesterday at a press conference.

The EU gave Turkey a list of 72 criteria to fulfill for visa-free travel for Turkish nationals after the two sides signed an agreement to stop illegal migrants from crossing to Greece from Turkey.

The 28 EU member states and European Parliament must also approve the visa scheme. Aside from visa liberalization, the EU pledged to provide financial aid for refugees in Turkey and to accelerate EU membership talks.

Commenting on the issue, presidential spokesperson İbrahim Kalın said that "putting this into practice in 2018 would give Turkish-EU relations new momentum and would change Turkey's perspective on the EU." He added that visa liberation for the Schengen zone is the Turkish people's right.

Turkey has long been calling for an EU-Turkey summit to discuss strained relations and find common ground.

The meeting will be a working dinner, a statement signed by Tusk and Juncker said. This gathering will serve as a way for the EU and Turkey to improve their friendship and is an "opportunity to assess matters of mutual interest and recent developments in Turkey, including in the areas of rule of law and fundamental freedoms," it added.

Aside from the summit, Çelik said that Turkey, as the term president of the Organisation of Islamic Cooperation (OIC), suggested holding a summit between the EU and OIC.

Çelik said that the summit would play a significant role in handling various issues ranging from Palestine to the Rohingya crisis in Myanmar and the developments in Syria and Iraq.

As Turkey shares a 911-kilometer border with war-torn Syria, the civil war has had various implications for the country. Turkey has followed an open-door policy for Syrians fleeing the civil war and has taken in over 3 million refugees. Çelik also called on the EU to step up its efforts to contribute to preparing living conditions for returning refugees in Syria to enable them to return their homes.

Touching on the EU's statements on Turkey's ongoing fight against terrorism and its Operation Olive Branch, Çelik said that they raise concerns that the EU does not have a principled stance on the issue. Referring to the EU's stance, Çelik said: "Unfortunately, we did not see the expected approach from the EU."

In the face of growing threats to its national security, Turkey has been fighting against various terrorist groups such as Daesh and the PKK. Turkey has long voiced its concerns over its NATO ally U.S. arming the PKK-affiliated People's Protection Units (YPG) in Syria.

As part of efforts to eliminate terrorists from its borders, Turkey launched an operation in Afrin, Syria, on Jan. 20. Turkish officials repeatedly stress that Turkey has no eye on Syrian territory, but it has to take steps to ensure its national security. The YPG has been attacking civilians in Turkish provinces along the border since the operation began.

Çelik said that EU member states' main concern should be the YPG rocket attacks in Turkey that have killed civilians. Reiterating that the Democratic Union Party (PYD) and YPG are inextricably linked to PKK, which is accepted as a terrorist group by the EU and the U.S, Çelik said there are no difference between the PKK, PYD and Syrian Democratic Forces (SDF), which is largely composed of YPG elements. He also criticized statements calling for an end to the operation in a short period of time and added that the operation is a just step by Turkey and it will not back out of the operation.

When Turkey launched the Afrin operation, EU officials called for restraint while acknowledging the threats Turkey faces. Speaking at European Parliament, European Union foreign policy chief Federica Mogherini said that Turkey has been facing unprecedented challenges. "We understand Turkey's concerns, particularly over the incidents along its borders. It is Turkey's right and duty to ensure the security of its citizens living along the Syrian border," she said. "We are concerned about the opening of a new frontier in northern Syria. Before anything else we are concerned for humanitarian reasons." Turkish officials have previously stressed that the operation is carried out with the utmost attention to avoid civilian casualties. Meanwhile, European Parliament is expected to hold a vote on a draft resolution on the Turkey's operation in Syria.