Turkey to take further steps for normalization with EU 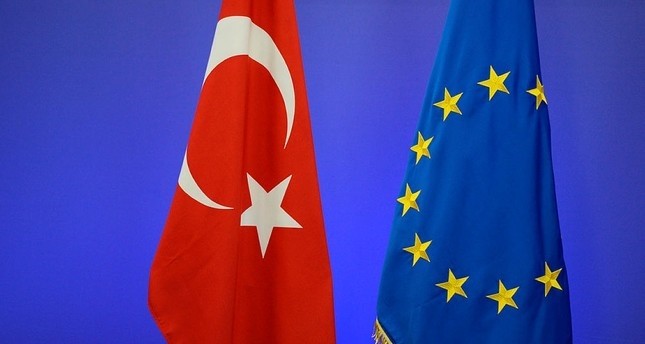 As per President Recep Tayyip Erdoğan's instructions, Ankara shoulders further responsibility for the normalization in ties with EU, with visa liberalization and the modernization of the customs union key issues to be addressed between the two

As Ankara and Brussels take reciprocal steps to put relations back on track, the Turkish government has been instructed by President Recep Tayyip Erdoğan to make further efforts toward normalizing sour relations with the EU following a long period of tension. Addressing fellow party members at the Justice and Development Party's (AK Party) Central Executive Committee and Central Decision Board (MKYK) meeting, Erdoğan reportedly said: "We do not want tension as Turkey. We place value on the summit in Bulgaria. We expect a positive outcome."

The president was referring to the EU Leaders Summit in Varna, Bulgaria on March 26. He is expected to be there as well to meet with EU heads of state and governments. Commenting on the upcoming summit, Nurşin Ateşoğlu Güney, an international relations professor from Bahçeşehir Cyprus University, stated that "there are some problems with the EU still awaiting resolution; however, we can say that the key members of the union such as Germany take a rational stance toward Turkey." Can Baydarol, an EU affairs expert, also said he believes one should wait until the summit on March 26 to see what it will lead to.

In line with the president's instruction, parliamentary committees started working closely with the EU. The Turkey-EU Joint Parliamentary Committee (JPC), which has not convened for the past three years, for example, will gather soon.

Karayel also underlined that Ankara will strive to dwell on bilateral ties. Announcing that a committee will visit Turkey from the European Parliament as well, he said Ankara works for the normalization on three to four different fronts.

Ankara has been trying to mend marred ties with some EU member states after relations hit rock bottom last year when there were elections in Germany and Austria and a referendum in Turkey. The elections in the Netherlands also greatly dented ties.

Meanwhile, the normalization process between Ankara and some EU member states seems to be working, a high-level EU official told Daily Sabah recently. "Turkey reaching out to Germany and Austria is working well. The relationship efforts are paying off," the high-level official said.

Ankara has previously warned Brussels that it would stop fulfilling its side of the migrant deal, which has seen a sharp fall in the number of migrants making the dangerous crossings across the Aegean Sea, if it does not keep its promises.

As ties between Ankara and Brussels move in the right direction, visa liberalization and the modernization of the customs union remain troubling issues for the former. That being said, the EU Commission reportedly said in an internal evaluation of Ankara's proposals regarding the visa liberalization process that the new proposals represen

t "substantial" progress. Turkey expects the EU to implement the next plan of the March 18 migration deal which foresees the readmission of refugees on a voluntary basis on the condition that irregular transition in the Aegean Sea decreases.

EU Minister Ömer Çelik stressed that Turkey's expectation regarding the implementation of the agreement has been conveyed to the EU as the irregular transitions have been substantially decreased. Turkey has sent 12,060 Syrians to EU countries as part of the agreement. With the efforts of Turkey, there has been significant decrease in illegal transitions. While the estimated transition was 7,000 in October 2015, the number decreased to 43 in January 2018.

Explaining that Ankara and Brussels have problems in different areas, the official asserted that the two are working quite well on foreign policy, security and the joint fight against terrorism.

In relation to the issue, Emre Gönen, an academic at Bilgi University, underlined that following the Varna summit "there might be a change of tone in relations between the two sides as both Turkey and the EU cannot give up on each other." Gönen added that the two sides cooperate on issues such as migration but Turkey's candidate status has been ignored by the