Turkey hopes to have left difficult period with the EU behind, Erdoğan says after summit 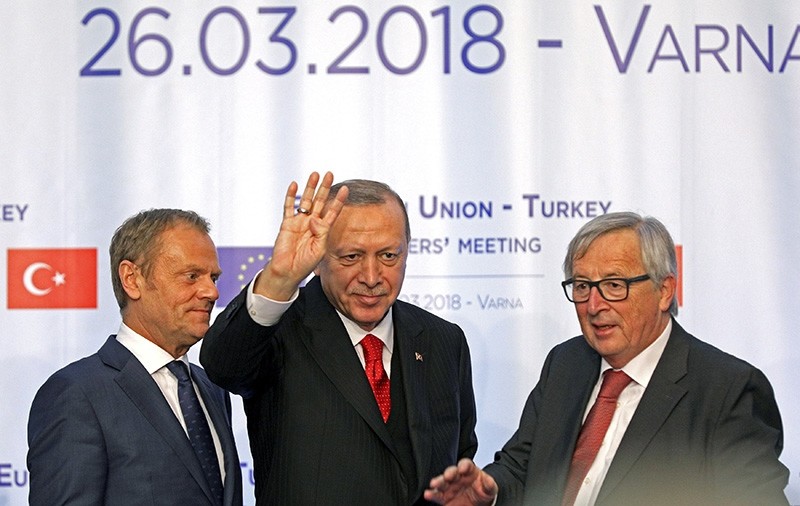 President Recep Tayyip Erdoğan said late Monday that Turkey hopes to have left this "difficult period" in its relations with the European Union behind.

Speaking during a joint press conference after the European Union - Turkey Leaders' Meeting in the Bulgarian Black Sea resort of Varna, Erdoğan said that he and the EU leaders discussed the steps necessary to improve relations between Turkey and the bloc.

The president also stressed that it would be a big mistake to leave Turkey out of the EU's enlargement process.

European Commission Chief Jean-Claude Juncker said that he was against the "simple, superficial" idea of cutting Turkey's accession negotiations to the EU, assuring that "I, myself, guarantee that Turkey's EU accession talks will continue" despite calls by some to end them. He was referring to Austrian Chancellor Sebastian Kurz who had earlier called on Brussels to end negotiations with Turkey.

Touching upon the failed July 15 coup attempt in Turkey in 2016, Juncker said it was "utterly unacceptable for the EU," underlining that the bloc did not know at the time that there was an assassination attempt against President Erdoğan.

Meanwhile, European Council President Donald Tusk said that no "concrete solutions or compromises" were reached in the EU-Turkey summit, but that he hopes to make "this possible in the future."

"Only progress on these issues will allow us to improve the EU-Turkey relations, including the accession process," Tusk said.

On the topic of combating terror threats, Erdoğan said Turkey expected strong support from Europe on sensitive issues such as the fight against terrorism, instead of rambling and unjust criticism.

Underlining the EU's intention to "expand cooperation with Turkey on foreign terrorist fighters," the European Council president was also joined by Juncker saying that the bloc stood by Turkey in terms of the fight against terrorism.