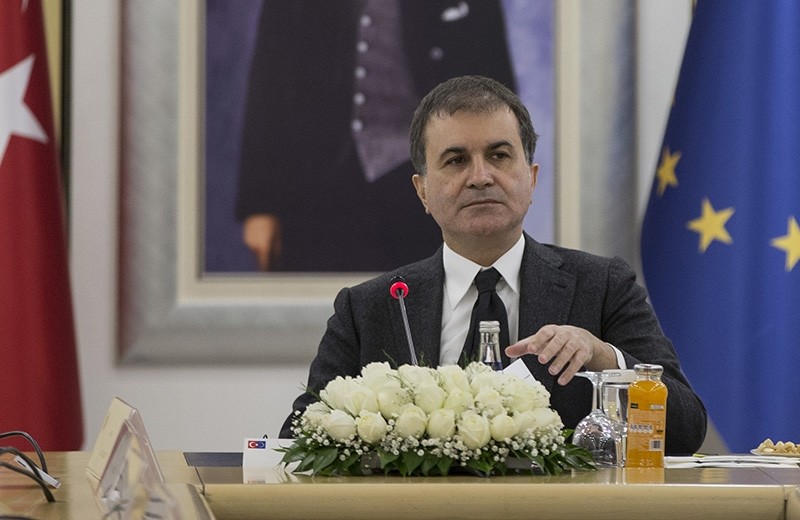 EU Minister Ömer Çelik criticized a recent annual Turkey report by the European Commission, saying that it does not present fair and objective criticism and slamming its portraying of the Gülenist Terror Group (FETÖ) as an innocent nongovernmental organization.

"The report is far from encouraging closer relations between Turkey and the EU," Çelik told reporters Wednesday, saying that it is unacceptable for the bloc to set aside the prospect for Turkey's accession. He noted that he will write a letter to the commission, adding the claim that the country is moving away from the bloc's values is a political approach.

"We are not afraid of criticism, but this approach lacks fairness," the minister said.

Çelik highlighted that the bloc continues to criticize Turkey's fight against terrorism, without comprehending the fact that Turkey ensures Europe's border security through its own and noted that even though European countries seem to understand this in bilateral talks, reports speak otherwise.

Regarding the presidential system which was approved in a referendum, Çelik said that the bloc needs to respect the decision of the Turkish people.

Çelik also noted that Europe does not stand in solidarity with the country at times of PKK terror attacks, adding that Ankara does not accept Europe referring to FETÖ as a movement.

The European Commission has criticized Ankara in its latest progress report released Tuesday, saying Turkey is moving rapidly away from the path of European Union membership, calling for lifting its state of emergency, while praising the country's humanitarian efforts for the nearly 4 million refugees it hosts within its borders.