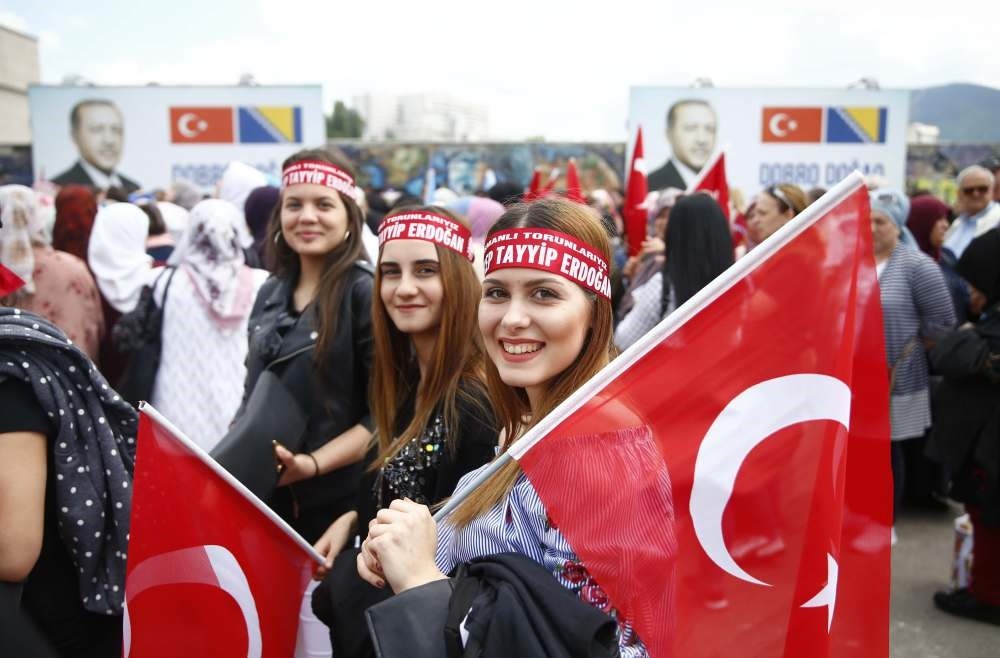 Supporters of President Recep Tayyip Erdou011fan gather before a pre-election rally in Sarajevo, Bosnia-Herzegovina, May 20.
by Alen Lepan
May 22, 2018 12:00 am

Turkish people living in Europe criticized European countries for their hostile attitudes against Turkey. They also added that even though they are pleased with Turkey's reforms regarding military service and the pension system for expatriates, they expect further developments in the economy

On Sunday, Turkish-European expatriate supporters of the ruling Justice and Development Party (AK Party) criticized European states for their hypocrisy toward Turkey's democracy. The criticism came during a mass rally that was held by the AK Party in Bosnia-Herzegovina's capital Sarajevo, where the party's chairman President Recep Tayyip Erdoğan addressed a large crowd from various European countries.

"We were taught and believed that there was democracy in Europe. Now, we realize that there are regions where democracy does not actually function. Some European countries try to run democracy only when it serves their purpose," Talip Kırık, a 56-year-old Turkish expat who has been living in Mainz, Germany for 40 years, told Daily Sabah.

Commenting on the hostile attitude by a number of European countries toward Turkey, Kırık, who works at car seat factory, said the latest events have gone beyond being political issues.

He added that this become a trend that European countries are following and which is not right in terms of European democracy.

"Before, we had been taking them as an example from a democratic perspective. It did not come out as we hoped. They are not as we hoped they were," he said.

Meanwhile, President Erdoğan addressed the massive crowd of around 20,000 at the historical Zetra Olympic Hall and also met with local officials during his visit.

The rally was part of the AK Party's efforts to reach the more than 3 million Turkish voters living on the European continent before the June 24 presidential and parliamentary elections.

The event in Bosnia and Herzegovina was the only rally Erdoğan is scheduled to conduct in Europe ahead of the vote. Supporters arrived from across Europe, including Austria, Belgium, Scandinavia, the Netherlands, Switzerland, Italy and Hungary to show their support.

Kırık said they were not able to raise their voices before, but now they feel that the government is behind them.

When asked what he, as an expatriate, thinks of the work the Turkish government has carried out over the last 15 years, he said that even though he had been living in Germany for most of his life, he is a person who knows very well and remembers how much Turkey has progressed over the years. He also said that he had a chance to observe this during his visits to the country.

"But unfortunately, our people living in Turkey are not aware of this and I feel sorry for that. In fact, they should be the first to realize it," he said.

Many European governments, including Germany, had previously barred Erdoğan, who is the AK Party's presidential candidate, from staging political events in their countries. In April, Austria and the Netherlands also said they would ban any campaigning by Turkish politicians on their soils for the June elections.

Since 2014, Turkish citizens abroad have been able to vote in elections at special voting booths, and are becoming a significant force.

"Democracy in Europe is just their own. There is no democracy for foreigners. I have been looking at it in this way for 40 years now and I am still experiencing it personally," said Faruk Gümüş, a 57-year-old expatriate who lives and has been working in Hamburg, Germany for almost 40 years.

"Europe does not want Muslim Turks in Europe to develop and strengthen. This is obvious. They have not wanted us to come together for quite some time," Gümüş said, talking about the bans a number of European countries put on Turkish politicians for campaigning.

"I had my flower shop. An 80-year-old German lady came in one day. She took some flowers and we had a short conversation. Suddenly, she asked me what I think of President Erdoğan. I told her we love him because he looks after his citizens. 'But he is a dictator,' she told me. I asked what Erdoğan did to her. She said nothing," he said.

"She got this from the media and many false reports that are being carried out in Germany against Erdoğan. She told me that if she knew that I was supporting Erdoğan, she would have left the shop. I told her she was not late and that she can do so immediately. She did not want to buy anything just because of my political opinion," he added.

Expats should integrate but preserve identity

During his address, Erdoğan urged the Turkish community to make sure the future generations are raised with a proper education and the language of their host country. But, he said, they should also preserve their values and remember their Turkish identity.

He also called on expatriate voters living in Europe to "show their strength" in the June 24 snap presidential and parliamentary elections.

Speaking of his expectations, Kırık said Turkey has achieved to become independent in some areas, however, it still has countries it depends on in terms of economy.

"That is one of the reasons why our currency is devaluing. When looked at our population, our exports are weak. We are an agricultural country, not an industrial country. Until now, we have been making foreign capital richer," he said, adding that the government should concentrate more on economic reforms in the post-election period.

He sighted that Turkish expatriates were very pleased with the reforms regarding the military service and pension system for Turkish citizens living in Europe.

In this context, Erdoğan pledged to work to provide employment opportunities for Turkish citizens who retired abroad and to fund new programs for their children to learn Turkish.