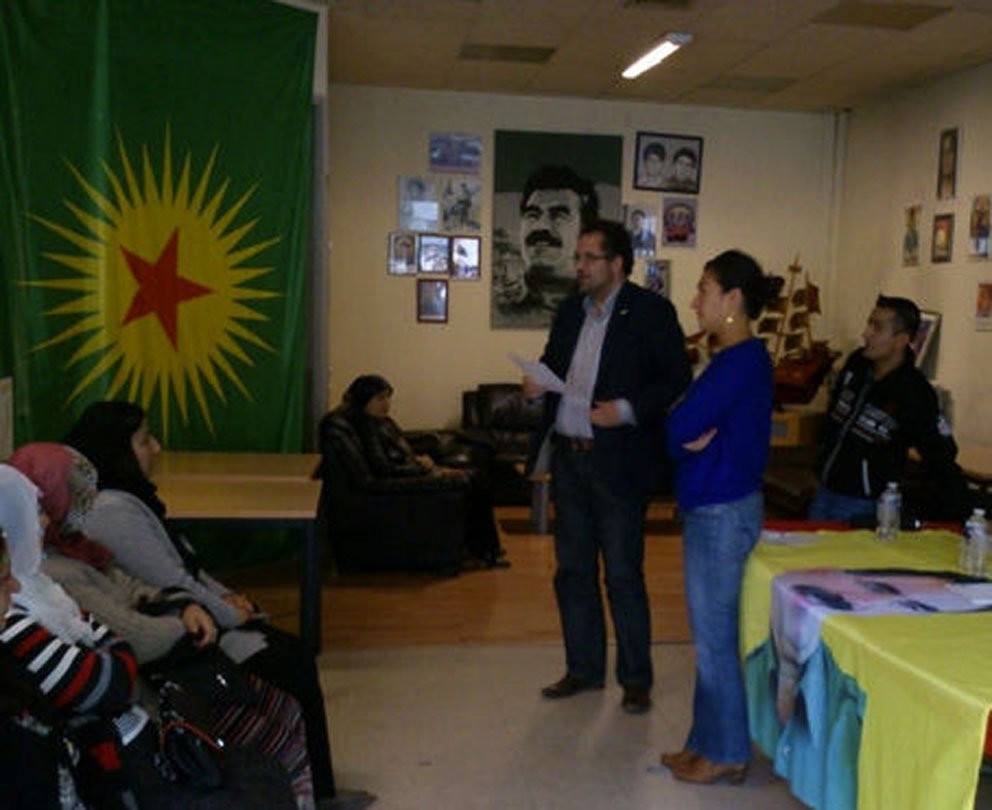 A picture of the imprisoned PKK leader Abdullah u00d6calan hangs in the background as Demir (R) attends an event organized by PKK symphatizers.
by Mehmet Solmaz Jun 04, 2018 12:00 am

New Flemish Alliance (N-VA) parliamentarian Zuhal Demir, who is accused of making PKK propaganda and known for her remarks against Muslims and Turkey, objects to Turkish language lessons given to children of Turkish descent after school.

In the spotlight for her anti-Turkey discourses in the Flemish nationalist N-VA in Belgium and for being secretary of state responsible for equal opportunities and poverty reduction, Demir recently said she wants to renounce her Turkish citizenship

According to a news report published by Het Laatste Nieuws (HLN), around 50 students of Turkish descent in Ghent receive Turkish language lessons after school with teachers funded by the Republic of Turkey. Contending this activity is against the process of integration, Demir said that President Recep Tayyip Erdoğan provides Turkish lessons to hamper Turkish people's integration into Flemish society.

A young Turkish woman commenting on this report pointed out that they had command of two languages when they were 14 thanks to these lessons and asked: "Have we not managed to be integrated in society now?"

Many Flemish readers with common sense also reacted to Demir's latest statements. One reader said that Hebrew lessons are given to Jews in a way similar to Turkish lessons and that these activities are funded by Belgium. Elke Decruynaere, the Alderwoman of Education, Upbringing and Youth for Ghent, indicated that such subjects must not be politicized and pointed out that Polish lessons are also taught after school with contributions by the Polish Embassy.

Demir indicated that she feels Flemish in an interview she gave to De Morgen. On the possibility that the Turkish government might refuse her application, she said, "But at least then I will have made it clear that the love affair is over."

Demir's anti-Turkey and anti-Islam stance is considered the main factor in her coming to the fore in the nationalist party and becoming a state secretary.

Her statement, "Muslims cannot adapt to our values," stirred reaction and she targeted the Muslim community in Belgium by remarking that Muslims living in Belgium must be assimilated for their own good. Demir added that Muslims can be integrated by force if necessary. The Muslim community in the country, on the other hand, which has made great contributions via their taxes and labor, argues that Demir is not the right person to be a state secretary responsible for equal rights.

She co-penned an article with a member of the European Parliament from N-VA Mark Demesmaeker, "Erdoğan wants to kill Kurds," which was published by Knack magazine. Demir referred to the PKK terror group as the "banned Kurdish resistance group" in the article. Demesmaeker, on the other hand, appears at almost every PKK protest and trial in Brussels and recently organized an anti-Turkey conference with two names who comprise the media leg of the Gülenist Terror Group (FETÖ).

In every statement, she points out that she is against violence, yet contradicts her very remarks: Demir shared the page "The People of the Year: Kurds" featured in Humo magazine, which praises the PKK and its Syrian offshoot, the People's Protection Units (YPG). Smiling, Demir posed for the magazine in an interview she gave in northern Iraq, featuring Kalashnikov automatic rifles, and pointed to the mountains behind her and said she would be in the mountains now if her father had not moved to Belgium.

Attending a TV broadcast on Belgian's state-run Canvas, Demir made comments on Turkey and terrorism during the program. When asked about photos taken at PKK events, Demir said that this is not an unexceptional case and did not conceal the fact that she attended the PKK march in Brussels.

In a speech she delivered in parliament in 2011, Demir requested a headscarf ban in parliament. Demir was pleased with the European Court of Human Rights' refusal of complaints issued by employees wearing the headscarf in Belgium and France, stating that use of force can also be employed to that end: "Muslims must adopt our values. But not everyone is doing this at their own initiative. Some of them need to be helped or forced."

Disturbed by protests organized by Belgian people of Turkish descent following the failed coup attempt, Demir contended that a majority of Belgian citizens of Turkish descent regard Turkey as their homeland and support President Erdoğan, which constitutes a problem according to her. Expressing concerns over protests against FETÖ members in Belgium, Demir said that although Turks in Belgium are physically in Belgium, their hearts are still beating by the Bosporus.