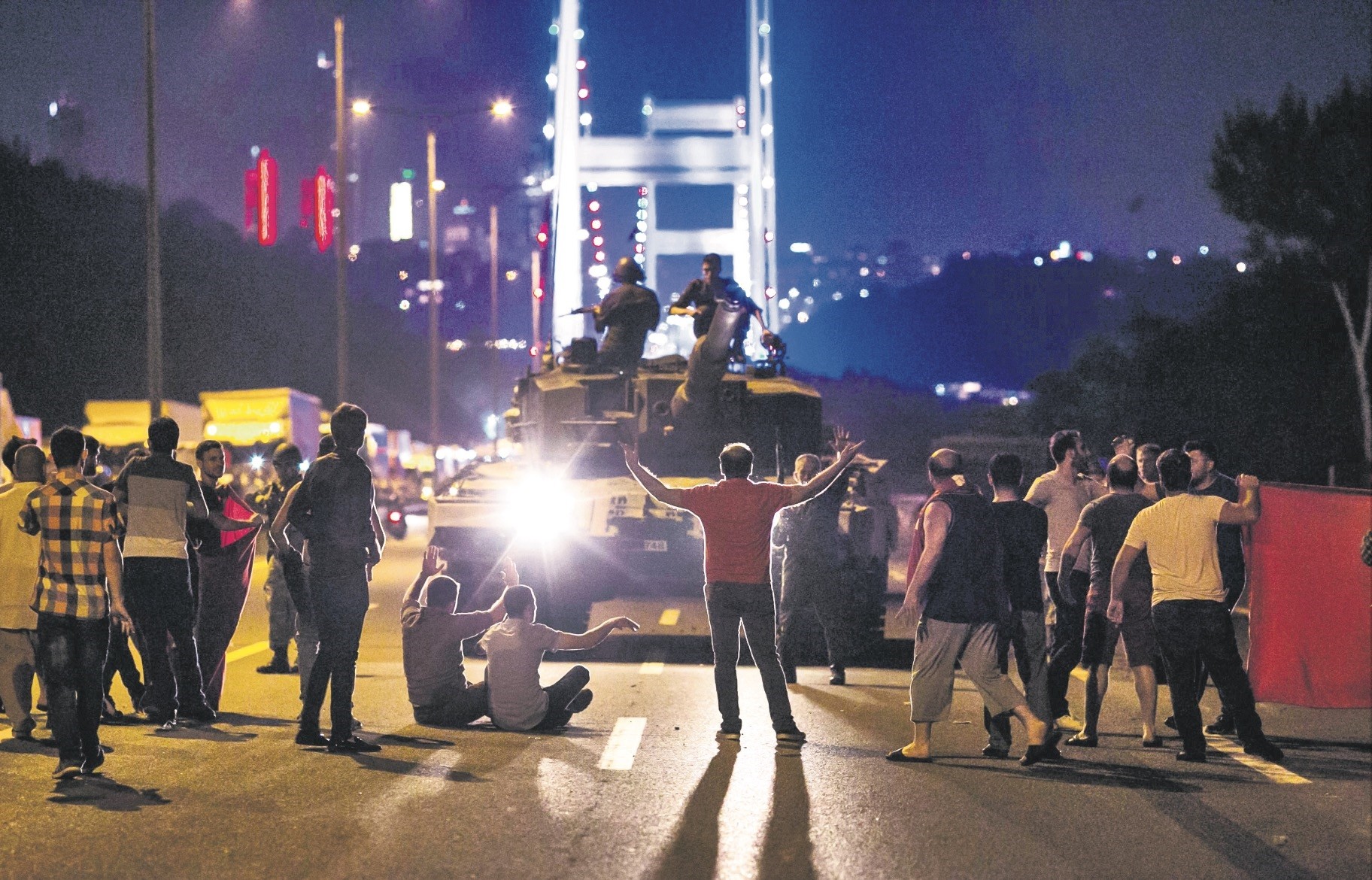 People take over a tank near the Fatih Sultan Mehmet bridge during clashes with military forces in Istanbul.
by Mehmet Solmaz
Jul 14, 2018 12:00 am

Ankara directed severe criticisms toward EU countries due to their indifferent stance against the July 15 coup attempt, that killed more than 200 people, and their failure to cooperate with Ankara on post-coup investigations regarding suspects fleeing to Europe

The European Union, which is vocal about rights and describes itself as the champion of democracy, has unfortunately failed to respond to the military coup attempt that took place in Turkey two years ago.

Ankara's main criticisms directed toward the EU are their weak and late condemnations, failure to cooperate against the Gülenist Terror Group (FETÖ) putschists and for paying much greater importance and priority to alleged rights violations against the putschists while not speaking a word about the thousands of victims of the failed coup.

While the country was experiencing trauma, Europe did not care about the mountains of evidence about who was behind the coup attempt that killed more than 200 people. Video showing a fired FETÖ police chief being found in a putschists' tank with a military uniform on was just one example for Turkey's European partners, just like thousands of other pieces of evidence.

Europe's attitude has not changed much since the night of July 15, 2016. Although FETÖ members are now seen as suspicious people with shadowy cult discipleship, they are still enjoying freedoms without any investigations into their illegal activities in Europe or for trying to overthrow an elected government.

Turkey often criticizes EU countries, particularly Germany, for overlooking the activities of FETÖ members in the country and sheltering suspected figures who fled after the coup attempt. The group reportedly carrying out its illegal activities through foundations, associations and business establishments founded in Germany.

Other than a few countries, namely the United Kingdom and several European officials, almost no one wanted to look into what has happened that night, what the society went through and most importantly what the victims suffered that night while holding on to their democracy.

It is not a secret that the EU is unhappy with the democracy in the country and Ankara does accept that every single country has issues with their legislations and the way they are being put into force. However, at the same time they demand genuine criticism with good intentions. Turkish officials repeatedly called on their European partners to open EU negotiation chapters concerning the human rights and judiciary, so Ankara would carry on the necessary reforms, a call that was only heard by deaf ears in Europe.

Several months after the coup attempt, Frans Timmermans, the first vice-president of the European Commission, was quoted in an interview with a Belgian magazine, saying the U.S. investigations had pointed to "growing indications that the [Gülen] movement certainly played a role."

"It is now clear that what President Recep Tayyip Erdoğan says about the role of the Gülen movement in the coup is not total nonsense," Timmermans added.

The European official also said he thinks "the Turks have a point when they say that there was very little empathy from the outside world in the foiled coup." He said Europe could have been "more generous in our support" and said it "underestimated what took place" in Turkey.

The following question was raised to her, "It has been a year since July 15 and without an exception, all political parties in Turkey say that they the coup was staged by the Gülenists. Are we going to see any steps taken against this member and its activities across Europe?"

Surely she knows that member states have to bring this into a discussion and then vote to recognize the cult as a terrorist group, a fact that she previously repeated. She skipped on commenting on the huge amount of evidence showing FETÖ's involvement in the coup or the consensus of the Turkish public on the matter. Earlier in March, EU Commission President Jean-Claude Juncker gave some striking comments at the EU- Turkey Leaders' Meeting in the Bulgarian Black Sea resort of Varna.

Touching upon the failed coup attempt, Juncker said it was "utterly unacceptable for the EU," underlining that the bloc did not know at the time that there was an assassination attempt against President Erdoğan. Juncker's very own words show the lack of interest or sincerity by the bloc on the matters involving Turkey. For the Europeans, it is still not late to consider Turkey an important partner not only for migration but for the future of the EU itself. It is only then, perhaps, the criticism toward Ankara would make sense and accepted by the Turkish government.