After 50 years of seesawing, Turkey believes it's time for EU to make up its mind 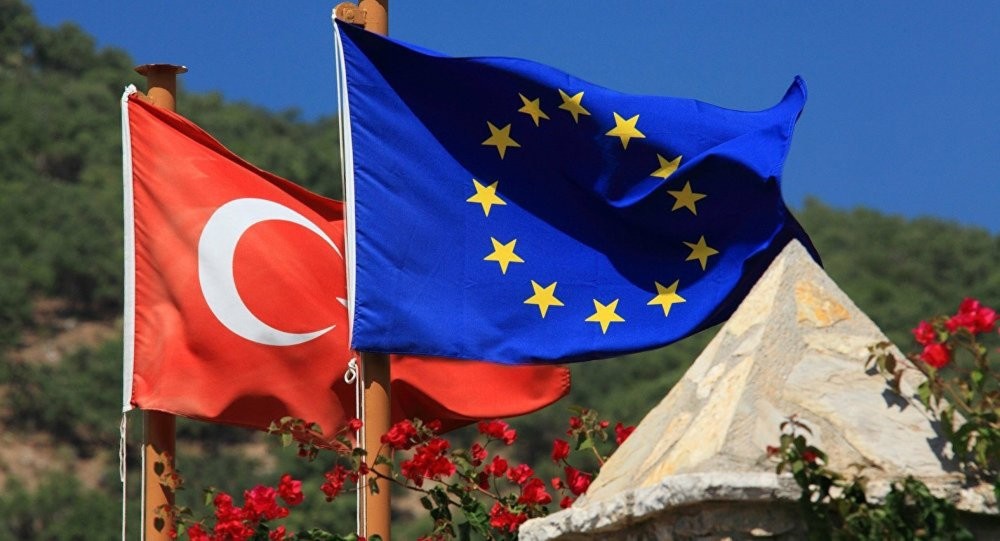 Caption: Turkey and the EU have recently been in a period of normalization in relations thanks to mutual visits and positive remarks that have been made by both sides, displaying their willingness to restore ties.
by Tuğçe Kılıç
Oct 10, 2018 12:00 am

As Turkey-EU ties get warmer thanks to positive messages on both sides regarding improving relations, the former expects a concrete answer to its 50-year-old EU membership request

Turkey expects its bid to become a member of the European Union, launched some 50 years ago, to come to a concrete resolution amid recovering ties and reciprocal warm messages given by leaders on both sides.

Experts have said that despite all the ups and downs in the long-running accession talks, if Turkey's foreign policy preferences and concerns - as a part of the geopolitical context of the country - are taken into account by the EU, bilateral ties would improve.

Ömer Baykal, an assistant professor of Political Science and Public Administration at Bartın University, told Daily Sabah that both parties are irreplaceable for each other. Though Turkey's long march to the bloc can continue even further, turning back to the negotiation table is a positive step for both sides.

"It was 1963 when the negotiations started and it is 2018 now. No other candidate country has received this type of treatment," President Recep Tayyip Erdoğan said during a press conference with Hungarian Prime Minister Victor Orban in Budapest this week.

Turkey and the EU have recently gone through a period of normalization in ties. Mutual visits and positive remarks have been made by both Turkish and EU officials, who have displayed their willingness to restore ties.

Pointing out the fact that the Trump administration's hegemonic policies have pushed Turkey to turn its face to EU, which had previously vexed the country due to the bloc's indifference regarding the July 15, 2016, coup attempt, Baykal said: "Turkey should adopt a multilateral policy but considering economic relations, Turkey will never ignore the EU."

In 2017, the EU accounted for 36.4 percent of Turkey's imports and 47.1 percent of exports. That means the union is still Ankara's top trading partner. Europe is a still a leader in foreign direct investment in Turkey with $4.85bn, some 65.2 percent of the total.

"Turkey also occupies a significant place for the EU with its humanitarian and political strategies in Syria. Its geographical location also makes it a buffer zone between the EU and Syria. The EU cannot abandon Turkey," Baykal said.Turkey and the EU signed an agreement in 2016, to solve Europe's most pressing problem, the influx of refugees to the Union, which has a far lower number of refugees than Turkey.

The agreement said that in exchange for Turkey stemming the refugee flow to Europe, the EU would pay Turkey 6 billion euros in financial aid. The agreement also foresees an acceleration in Turkey's EU accession talks and visa-free travel for its citizens. Although Turkey did its part and irregular arrivals decreased by 99 percent, the EU failed to hold up its end of the agreement, failing to pay the stipulated amount and implement the visa regime even after 2 years of the deal came in effect.

Ankara sticks to the refugee deal despite the heavy economic and social burdens flowing from the influx of Syrian refugees and keeps its western border the towards Greece through the Aegean Sea under close surveillance.

Meanwhile, a quartet summit on Syria involving Russia, Germany, France and Turkey will be held in Istanbul this month. It will be a parallel meeting to the Astana process, which was initiated by Ankara, Tehran and Moscow to find a permanent solution to the Syrian crisis.Karel Valansi, a columnist for the Israeli daily Şalom, recently told Daily Sabah that she expects that the positive steps from both sides will continue, giving a fresh impetus to the relations.

Valansi indicated, on the other hand, that mending the battered relations will take some time.

The ruling Justice and Development Party (AK Party) spokesman Ömer Çelik said last weekend that Turkey is committed to being a part of the EU and added that "If the negotiations process continues, Turkey will open and close all the chapters within six months."

Ankara in its Reform Action Group (RAG) meeting in September decided to implement some new reforms. According to the RAG meeting, Turkey will prioritize reforms linked to its EU accession process in the coming period and expects to see results from its efforts, including on the issue of visa liberalization. Ankara promised to work on accelerating political reforms, focusing on the judiciary, freedoms and fundamental rights.

The accession talks have slowly been progressing recently as the EU demanded further changes in Turkey's counterterrorism laws, a demand turned down by Ankara due to the increasing threat posed by several terrorist groups including the PKK, Daesh, the Revolutionary People's Liberation Party-Front (DHKP-C) and the Gülenist Terror Group (FETÖ).

During its long journey to join the EU, Turkey has been always open to cooperation, doing its part within the bounds of its capabilities despite the recent deterioration. Yet, Turkey has been waiting for membership for decades as the EU keeps delaying the process.

In 1963, Turkey first signed Ankara Agreement which foresaw the abolition of tariffs and quotas on goods as part of an integration to the customs union with the European Economic Community (EEC), the predecessor of the EU, acknowledging the final goal of membership.

Subsequently, Turkey submitted its application for formal membership to ECC in 1987, however, it has been denied on the grounds of Turkey's economic and political situation along with its battered relations with Greece and Cyprus.After a long interim period, Turkey signed the European Constitution in 2004 leading to negotiations for full membership to be launched in 2005, when the AK Party was enjoying its first term in power.

However, the negotiations stalled in 2007 due to objections to open chapters by the Greek Cypriot administration on the divided island of Cyprus. The bitter relations further deteriorated after German Chancellor Merkel and then French President Sarkozy took power.

The objections revolving around why Turkey couldn't become a member dramatically changed. Instead of a lack of sufficient alignments on Turkish laws, both leaders rejected the prospect of Turkey's EU membership from an identity-centric perspective.