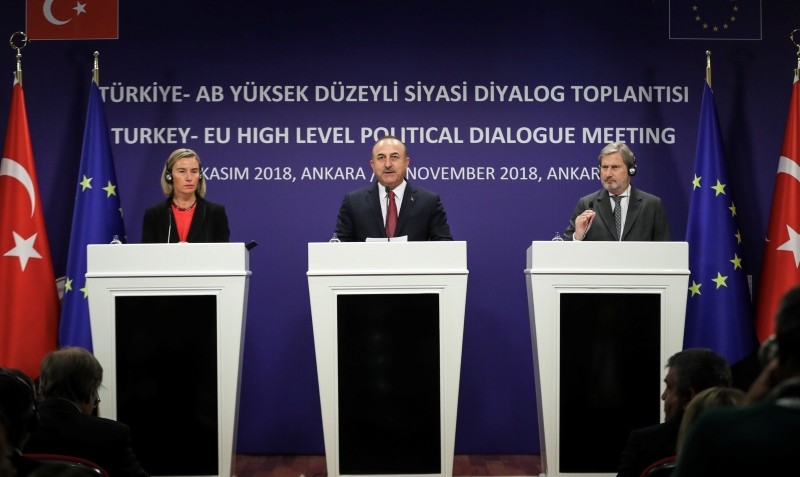 "It is our natural right to expect solid support from the EU, particularly in the fight against terrorism," Foreign Minister Mevlüt Çavuşoğlu said yesterday in a joint press conference with Federica Mogherini, the EU high representative for foreign affairs and security, and Johannes Hahn, EU Commission vice president and commissioner for European Neighborhood Policy and Enlargement Negotiations. The press conference was held after the Turkey-EU High-Level Political Dialogue Meeting in Ankara.

Welcoming the recent decision of the European Court of Justice to keep the PKK on the EU's terror list, Çavuşoğlu said it was a significant decision and the PKK should continue to be on the list. Yet, he underlined that it is unacceptable that the PKK continues its activities in European countries by carrying flags or symbols of the terror group. "We welcome the measures taken in some countries, such as in Germany and England; however, we find them inadequate."

In relation to the issue, a diplomatic source told Daily Sabah that compared to previous years, there is increasing sensitivity toward Turkey's concerns regarding the PKK terrorist group's activities in Europe. The source underlined that Turkey has been urging its European counterparts to take action against the PKK in various cases, and these efforts have yielded some results. The source stressed that while some of the EU countries do not consider the PKK a direct or existential threat to their countries, they were prompted to take some steps against the terrorist group in the face of the increasing concerns of Turkey.

Commenting on the Gülenist Terror Group's (FETÖ) activities in Europe, Çavuşoğlu also said it was unacceptable for Turkey that EU member countries were granting asylum to the members of the terrorist group, which orchestrated the July 15, 2016 coup attempt that lead to the deaths of 251 people and injured 2,200 others.

Evaluating the recent developments in Turkish-EU ties, Mogherini stressed that they welcomed Turkey's recent efforts to boost ties with the bloc.

"We can only salute and commend the decision that the Turkish government took to intensify relations with the EU," Mogherini said referring to the statements in the context of the Reform Action Group that will meet again in early December.

With an aim of turning a new page in the EU process, Turkey decided in the Reform Action Group (RAG) meeting in September to implement new reforms.

According to the RAG meeting, Turkey will prioritize reforms linked to its European Union accession process in the coming period and expects to see results from its efforts, including on the issue of visa liberalization. Ankara has promised to work on accelerating political reforms, focusing on the judiciary, freedoms and fundamental rights.

"Turkey is a candidate country and is also a key strategic partner for the EU. EU-Turkish ties are extremely important not only for the EU and Turkey but also very important for our region and global foreign policy at large," Mogherini said in the meeting.

"The EU wants a strong Turkey and strong cooperation with it. This is our objective. We want Turkey to be stable, prosperous and democratic, as a neighbor that we can work hand in hand in a region of strategic importance for both of us," Mogherini underlined.

Following the meeting, Hahn also tweeted yesterday that: "Turkey is a key strategic partner for the EU. Therefore, we should concentrate on areas of common interest where positive results are achievable."

Reiterating Turkey's expectations and the EU's need to fulfill its promises, Çavuşoğlu criticized the EU's decision against opening new chapters. "We made an agreement for migration. We signed to open five chapters [of the acquis communitaire], then a decision comes out. This is hypocrisy, there's no explanation to this," he said.

The foreign minister was referring to the March 2016 deal in which Turkey agreed to take in migrants who illegally enter Greece and send legal refugees from Turkey to the EU. In return, the EU was supposed to give 6 billion euros to Turkey to be used in projects for migrants, remove visa requirements for Turkish citizens and open new chapters in accession negotiations on the condition of implementing some proposed reforms.

Çavuşoğlu said in the press conference that there are six criteria left out of 72 for visa liberalization. He also stressed that the customs union should be updated as it would benefit both sides.

In the face of the criticism, Mogherini said the EU has "no double standards" but "high standards" and stressed that "in the world today, it is hard to find any partner that is more reliable and predictable than the EU." She pointed out that the EU expects concrete progress in the "rule of law, fundamental freedoms and human rights" in line with European Council standards, which are shared by Turkey as it is a founding member.

As Turkey and Russia stepped in and averted a possible disaster in Syria's Idlib with the Sochi deal, Mogherini said that the EU welcomes Turkey's efforts.

"I would like to first of all use this opportunity to publicly commend Turkey and President [Recep Tayyip] Erdoğan for the key role they have played in negotiating and implementing the Sochi memorandum on Idlib," Mogherini stressed.

She emphasized that "this memorandum and its implementation is key to help avoiding a huge humanitarian crisis and also to open political perspectives for a resolution of the crisis."

The Sochi agreement was reached on Sept. 17 by Erdoğan and his Russian counterpart Vladimir Putin. According to the agreement, the cease-fire in the Idlib region will be preserved, with the withdrawal of heavy arms and radicals from the region. Prior to the agreement, the Bashar Assad regime was signaling a grand operation in Idlib, the last stronghold of the opposition, sparking deep fears in the international community of a new humanitarian crisis.

Mogherini added that the EU has great respect and willingness to continue to support fully Turkey's unprecedented efforts in hosting and addressing the needs of more than four million refugees.