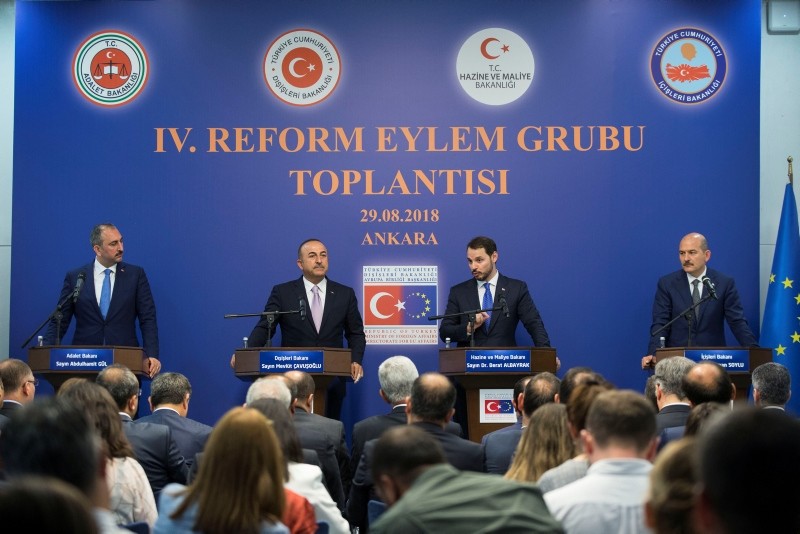 The Reform Action Group Meeting (RAG) will be hosted today by the Justice Ministry with the aim of evaluating the ongoing efforts to fulfill reforms and accelerate Turkey's European Union process, particularly in judicial adjustments.

According to a statement from the Foreign Ministry yesterday, in today's meeting which will be hosted by Justice Minister Abdulhamit Gül and attended by Foreign Minister Mevlüt Çavuşoğlu, Treasury and Finance Minister Berat Albayrak and Interior Minister Süleyman Soylu, the efforts for the reforms particularly in (Chapter 23) the judiciary and fundamental rights and (Chapter 24) justice, freedom and security will be evaluated. The recent developments in talks for visa liberalization will be also discussed.

"It is the second meeting of this year and it is really significant. We are looking forward to the results on the basis of what was indicated in the August meeting," a high level EU official also told Daily Sabah.

The Foreign Ministry stressed in statement following the fourth RAG meeting that, "The aim of the new strategy is to further enhance trust in the judiciary, improve access to the justice system, increase its effectiveness and provide better protection for the right to trial within a reasonable time."

While Turkey pledges to fulfill reforms, it also expects the EU to take steps including the visa liberalization and updating of the customs union.

In relation to the process regarding the visa liberalization, European Commissioner for Migration and Home Affairs Dimitris Avramopoulos said last month that Turkey had met nearly all of the requirements set by the EU for visa liberalization, except for seven. He underscored that Turkish officials were very determined to complete them all in the shortest time possible.

The regulation that Turkey needs to fulfill for visa liberalization includes operational cooperation agreement between Turkey and the European Police Service (Europol).

Accordingly, Turkey and the EU Commission launched talks in Brussels on Nov. 30 for an operational cooperation agreement with Europol.