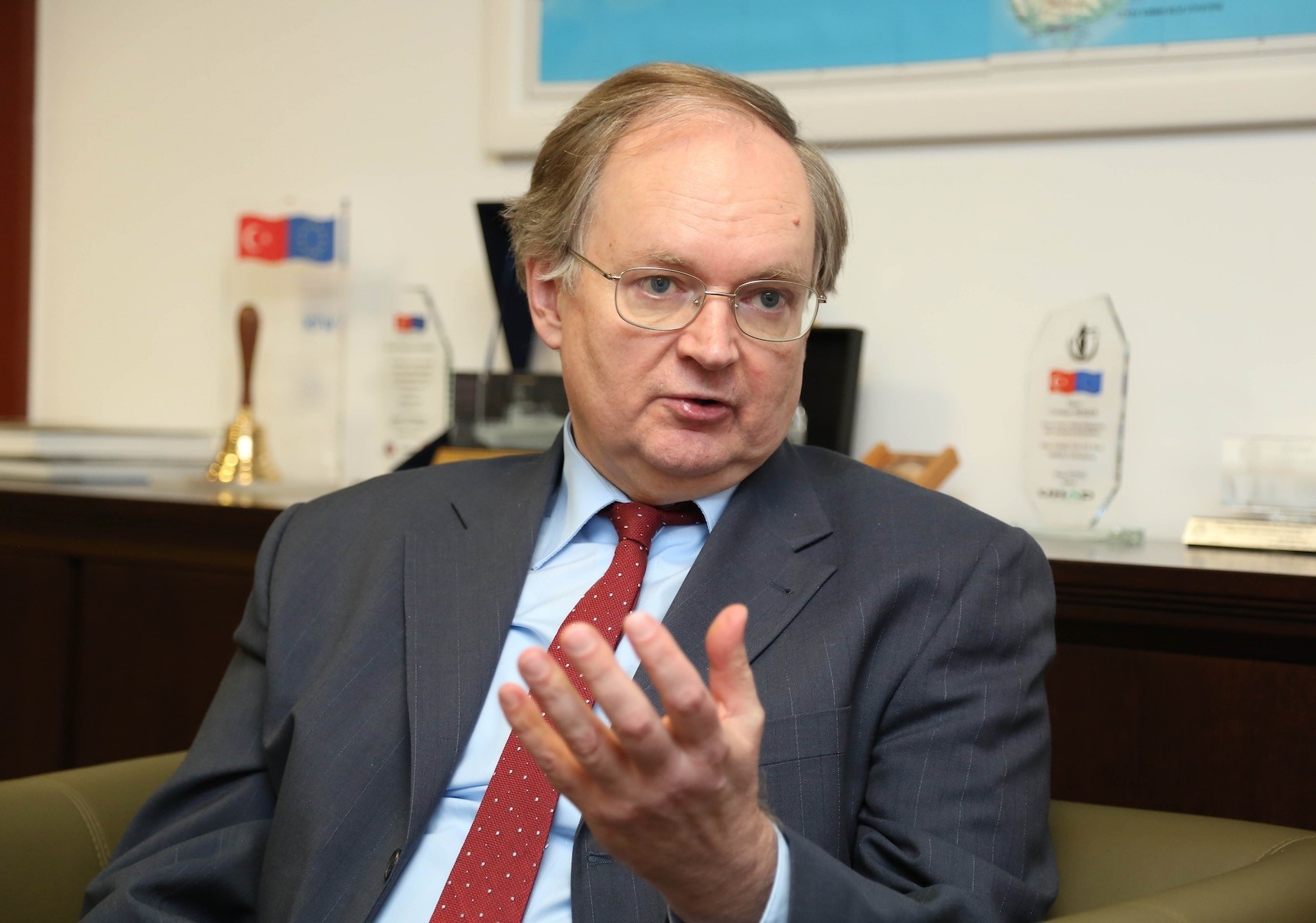 In addition to education and socio-economic support, the EUu2019s Christian Berger said some steps will be taken in health care, announcing that the construction of two state hospitals has already been agreed upon.
by Özgenur Sevinç Jan 28, 2019 12:25 am

The head of the EU delegation to Turkey, Christian Berger has said that the second tranche of the EU fund for Syrian refugees living in Turkey will be substantially used in the socio-economic area and in education.

In an exclusive interview given to Daily Sabah, Berger confirmed that following a series of intense high-level discussions in Turkey, the bloc has decided on the areas the second tranche of the 3-billion-euro ($3.42 billion) aid package would facilitate, prioritizing support for education and job creation. 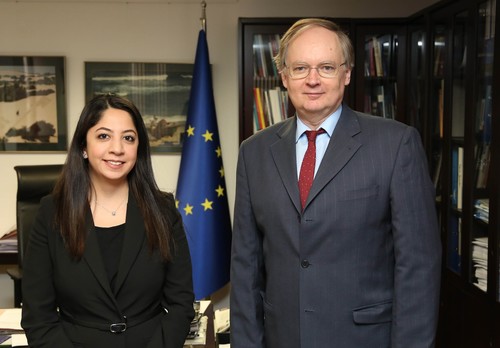 "Education is one of the focal areas of our support, making sure that all kids go to school and stay at school, ensuring that they do not drop out because they have to work and contribute to family income," said Berger.

He stressed that the first project of the second tranche of financial aid was signed with the Ministry of National Education already last December. Accordingly, 400 million euros in financial aid will be directly transferred to the ministry. In addition, an additional 100 million euros will be allocated to improve the school infrastructure.

In order to stem the refugee influx to Europe, Turkey and the EU signed an agreement on March 18, 2016. Accordingly, the EU will provide a total of 6 billion euros in financial aid for Syrian refugees living in Turkey and to the host communities.

As part of the deal, the EU also promised to accelerate Turkey's EU accession talks and the visa liberalization process.

Turkey shares a 911-kilometer-long border with Syria and has been greatly affected by the ongoing civil war. It hosts the largest number of Syrian refugees and has repeatedly called on other countries to share the responsibility of meeting their needs.

EU's Berger highlighted the significance of providing a future for the Syrians. He pointed to the efforts made in job creation, preparing them for the competition in the job market, technical training and language training.

Referring to the Turkish Red Cresent's "Kızılay Card," which provides a minimum TL 125 per person and month, Berger said, "We want to make sure that fewer people need that type of support. We want to help people to stand on their own feet economically."

He added that for this reason vocational training, technical training, education, and job creation is essential for Syrians. He said that various efforts have been made in coordination with the Ministry of Family, Labor and Social Services.

In addition to education and socio-economic support, Berger said some steps will be taken in health care. He announced that two state hospitals were agreed, one in Kilis and the other in Hatay - will be inaugurated with EU ambassadors to Ankara in attendance.

Syria conference in Brussels to focus on political resolution

In relation to the current situation in Syria, Berger stressed that the Syrian refugees can only return home once the region has stabilized. Therefore, he added that in the upcoming Syria conference in Brussels in mid-March, efforts in support of finding political solution will top the agenda.

Commenting on the EU's plan for reconstruction in Syria, Berger said, "I think we share the view of the international community, including Turkey, that we are not there yet to start a large reconstruction program in Syria. There might be some areas where works can be done and things can be fixed."

He said that Turkey has exerted some great effort in Operation Euphrates Shield and Afrin, the city it liberated. Berger said the issue of reconstruction would also come up in the Brussels.

With an aim of ensuring its border security and enabling the Syrian refugees to return home safely, Turkey has been planning to set up a safe zone along its borders. The country has discussed the plan with the U.S. and Russia. Even though Ankara has long suggested establishing the safe zone, no steps were taken as yet.

In order to ensure security, Ankara has stressed that the area should be free of the PKK-linked People's Protection Units (YPG). Turkey underlines that if the region is cleared of terrorist elements, the Syrians would voluntarily return to their countries.

"First of all, you need a safe area for people to return to because they have fled as there were continuous fighting and oppression. People just do not leave their homes for nothing, there is always a reason why they leave," said Berger.

About Turkey's plan to establish a safe zone, Berger said, "I do not know the details of what Turkey and the U.S. agreed on or what Turkey discussed with Russia, but whatever area can be created under the right circumstances and where people can feel safe to return to is certainly welcome."

Romanian Foreign Minister Teodor Melescanu previously highlighted that Romania, which is currently heading the EU's rotating presidency, will work on holding an Association Council between Turkey and the EU with an aim of accelerating negotiations on different issues.

Berger underlined that the idea of holding another Turkey-EU leaders meeting has been discussed for a while, yet there is no clear date set for now. Last year the sides held a summit in Varna, Bulgaria. Referring to the plans for a new summit, the EU delegation head said that the sides see the necessity for engagement on all levels.

Following a stalled period in ties with the EU, Ankara has announced that it is willing to turn a fresh page and take concrete steps to boost dialogue. With an aim of reviving its EU process, Turkey has also sought to implement some reforms in line with the recent Reform Action Group (RAG) meetings.

The last meeting of the RAG was hosted by Justice Minister Abdulhamit Gül on Dec. 11, 2018, in Ankara, under the coordination of the Directorate for EU Affairs, with the participation of Foreign Affairs Minister Mevlüt Çavuşoğlu, Treasury and Finance Minister Berat Albayrak and the Interior Minister Süleyman Soylu.

Commenting on Turkey's efforts, Berger said, "I think it is really important that Turkey has taken the decision to reconstitute the Reform Action Group, which had not met for several years," and added that the group has been currently addressing various issues that were on Turkey and the EU's agenda.

The ambassador underscored that the internal work between the ministries is being carried out and they were expecting the RAG to finalize their work soon, particularly on the judicial reform.

In the last RAG meeting, it was highlighted that "Turkey will decisively continue its efforts to align with EU standards, despite political obstructions in the accession negotiations." The next meeting of RAG will be held by the Ministry of Treasury and Finance in the first half of 2019.

Touching on Turkey's remaining benchmarks for visa liberalization Berger said that the Foreign Ministry has set up internal working groups to work on the six remaining benchmarks and in the previous meeting of the RAG in December, they announced that one of the benchmarks involving biometric passports was actually ticked.

"We have been supporting the government in procuring and distributing biometric passports to the population," Berger added.

Furthermore, Turkey started negotiations regarding the visa-liberalization dialogue to conclude the agreement between Turkey and the EU on the exchange of personal data between the Europol and the competent Turkish authorities on the fight serious crimes and terrorism on Nov. 30 in Brussels.

As one of the remaining criteria is about updating the anti-terrorism law in Turkey, Berger said they have been told that intensive work going on the between the various ministries.

The ambassador stressed that the technical meetings between Turkey and the EU will continue in the upcoming days. He added that there will be a high-level economic dialogue meeting on Feb. 28 in Istanbul.

"A business forum for European and Turkish businessmen and business associations will most likely be held in March or before," said Berger.