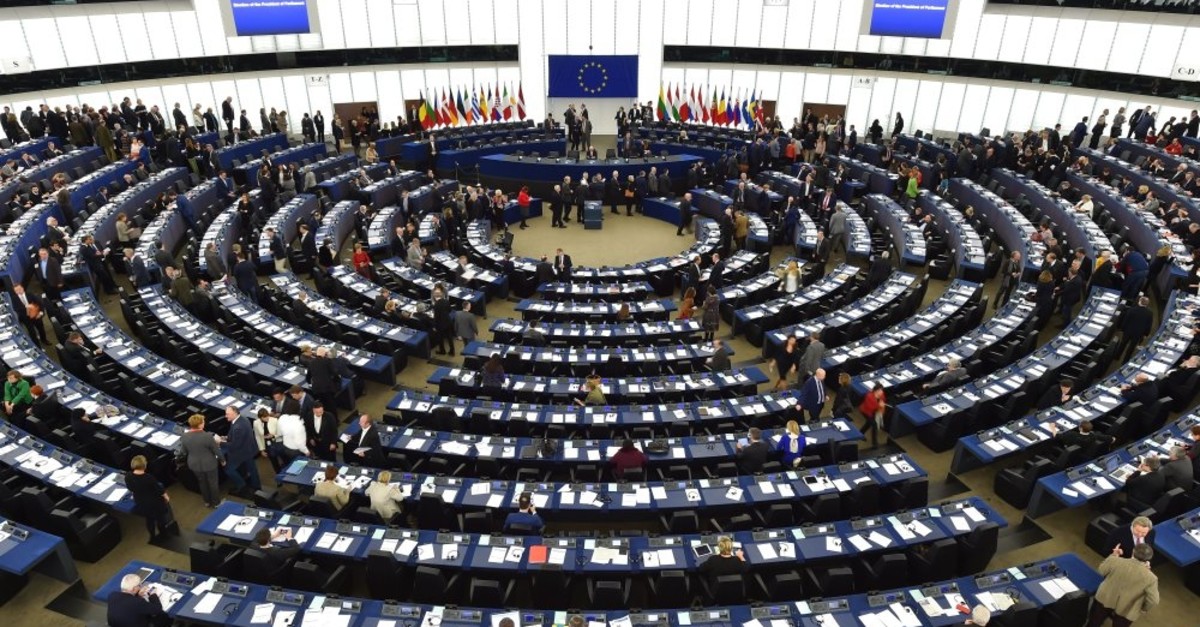 The European Parliament called on European countries on Wednesday to formally suspend Turkey's EU accession negotiations in a decisive 370 to 109 vote.
by Mehmet Solmaz Mar 15, 2019 12:24 am

A total of 370 members of the European Parliament, not even a majority, achieved passing the annual Turkey report that called for the suspension of negotiations with Ankara. Rapporteur Kati Piri drew ire for meeting with PKK supporters prior to the vote

The voting in Strasbourg came only days before the meeting of the Turkey-EU Association Council, which has not convened since 2015 due to difficulties in relations. While members of the European Parliament voted in favor of the call to suspend ties with Turkey, a majority again voted against completely ending Turkey's EU bid. Following the voting session, European Parliament rapporteur Piri thanked MEPs and openly picked on President Recep Tayyip Erdoğan and brought criticism toward judicial cases in Turkey. Prior to the voting session, Piri held a talk with a group of PKK supporters. The group included Dilek Öcalan, a former deputy and the niece of PKK leader Abdullah Öcalan, and some other PKK supporters, who wore T-shirts bearing Öcalan's photo.

An hour before the meeting, the pro-PKK Peoples' Democratic Party (HDP) Europe representative Eyüp Doru, who also previously fought against Turkey in the ranks of the PKK for five years, held a press conference with several members of European Parliament.

The very same group demanded another amendment which called against a possible conversion of the Hagia Sophia into a mosque. The request was approved by the majority of lawmakers.

Turkey's Foreign Ministry rejected European Parliament's recommendations to the EU Council and Commission, stating: "It is not possible for us to attribute any value to the one-sided and non-objective approach adopted by the European Parliament. Turkey expects that the new European Parliament, to be formed after the elections in May, will adopt a constructive approach to Turkey-EU relations in the upcoming period, take qualified and objective decisions and boost Turkey's EU integration process."

The European Parliament report is thought to be voted in favor mostly by the extreme right and left-wing political parties. Ankara's statement said Turkey finds it concerning for the EU's future and common values that the extreme right and left wings, which are starting to dominate the European Parliament, "have turned this report into an exclusionary, discriminatory and populist text which does not reflect the reality. Instead of encouraging the elimination of political obstacles to the negotiation process, this and similar initiatives prepared in cooperation with those opposed to the European integration and our common values, contradict the values represented by an EU institution."

The ministry said the European Parliament's stance on Turkey should aim to develop Turkey-EU relations, interaction and dialogue. "We expect the new European Parliament which will be constituted following elections in May to adopt a constructive approach on Turkey-EU relations in the forthcoming period, to take qualified and objective decisions and to promote Turkey's integration with the EU."

Hours after the voting session, the European Parliament released a press statement in which it said the parliament will not be observing or commenting on the process of the local elections in Turkey, scheduled for March 31.

The EU-Turkish Association Council is meeting today after a four-year interval. The association council is the highest decision-making body in the Turkey accession process.

The Turkish side will be represented by Foreign Minister Mevlüt Çavuşoğlu and EU foreign policy chief Federica Mogherini will speak on behalf of the EU, together with Enlargement Commissioner Johannes Hahn.

A day before the European Parliament voting Wednesday, Hahn spoke at the parliament and assured members of European Parliament that the commission would not be opening or closing any EU accession chapters. Ankara has been ignoring statements made by Hahn for a long time and accuses the Austrian politician of playing into the hands of the extreme-right.

Visa liberalization, updates in the customs union, Turkey's accession process to the EU and cooperation in the fight against terrorism are expected to be the main topics of the meeting. Despite the recent normalization in ties, EU members have noted that the negotiations have come to a de facto standstill and pointed out their concerns over claims of regression in terms of the rule of law and freedoms in Turkey.