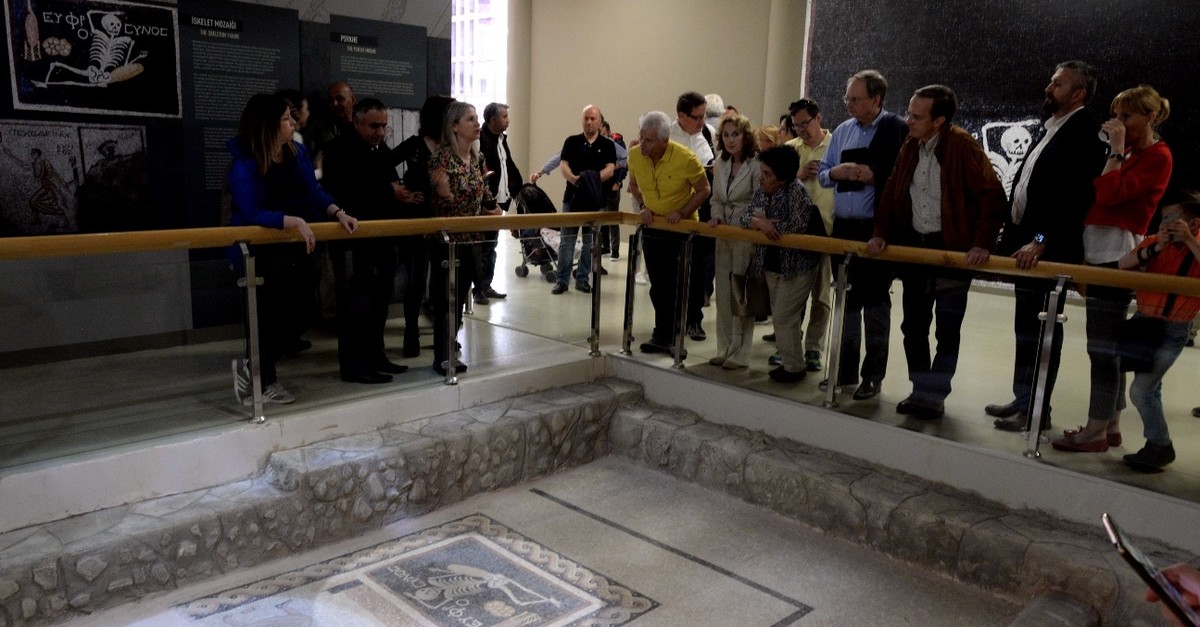 EU ambassadors to Turkey also visited Hatay Archeology Museum during their visit to the southern province, April 14, 2019.
by Özgenur Sevinç Apr 16, 2019 12:20 am

Hosting some 4 million refugees from its immediate neighborhood, Turkey's tolerance and welcoming policy for refugees has set a global example in its humanitarian approach

Turkey's response to the humanitarian crisis in neighboring Syria has made it a beacon of tolerance and hope. By welcoming and assisting millions of Syrians, it has set an example for the rest of the world, according to ambassadors from EU member countries. "What I find fascinating here is that after the incidents in Syria, people of Hatay took some serious responsibility upon their shoulders. They showed tolerance and took a humanitarian approach to their friends and brothers on the other side of the border," Danish Ambassador to Ankara, Svend Olling, told Daily Sabah during the EU delegation's visit to Hatay. After the civil war erupted in 2011, many Syrians took refuge in Turkey, particularly in the southeastern province of Hatay that shares a border with Syria.

Stressing that the idea of tolerance is historically embedded in Hatay, Olling underlined that "the people of Hatay are not just hosting Syrian refugees but also assisting them and this is an example for the rest of the world." Turkey has received a constant flow of displaced Syrians fleeing the conflict, with the numbers of refugees expanding from mere thousands to more than 3.5 million, by far the most among countries hosting refugees. Women and children make up the majority of refugees. 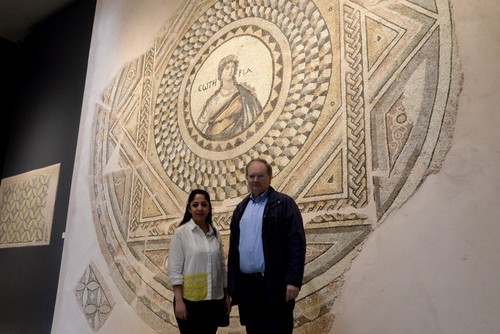 Daily Sabah's Özgenur Sevinç with the Head of the EU Delegation to Turkey, Ambassador Christian Berger.

"In recent years, Hatay is at the center of our attention, with the Syrian refugees whom Turkey generously hosts," Austria's Ambassador to Turkey Ulrike Tilly said, referring to the high number of refugees in the province. Hosting the largest number of refugees, Turkey has been repeatedly calling on other countries to shoulder more responsibility to ease the burden.

The head of the EU delegation to Turkey, Christian Berger, said that aside from meeting the socio-economic needs of the refugees, the U.N. should be supported in finding a political solution to the Syrian conflict because only then the pressure on host countries would ease.

With the aim of addressing the needs of Syrian refugees, Turkey and the EU have enhanced efforts implementing various projects in different parts of the country.

Ankara and Brussels signed an agreement in 2016 to find a solution to the influx of refugees heading to the union. According to the deal, Turkey was promised a total of 6 billion euros ($6.79 billion) in financial aid, which was initially designed to be given to the country in two stages and be used by the Turkish government to finance projects for Syrian refugees. Visa freedom for Turkish citizens was also promised under the agreement.

"As part of the health and medical support, on Tuesday there will be an opening ceremony of a hospital which will serve both Syrian and the host communities," Berger stated and added that in the field of education an agreement was signed to provide support for teachers, language training, school transportation and meals.

During their visit to the province, the EU member states' ambassadors have expressed their fascination over the rich culture and history in Hatay, which was host to numerous civilizations dating back as far as 9000 B.C. Expressing his appreciation of the province while visiting Hatay mosaic museum, Berger said Hatay combines many different things at the same time. Impressed by the mosaics at the museum, Berger said, "This museum is certainly the best in Turkey since it gives a very good overview of cultural richness in Hatay."

The province of Hatay where several cultures have lived together peacefully for centuries is also well known for its rich, delicious cuisine. Hatay is also recognized as the World City of Gastronomy by UNESCO.

"This is my second visit to Hatay. I have to say that it is one of my favorite regions in Turkey. What I find absolutely fascinating here is the depth of history. There are so many layers," the Danish envoy said.

Olling added "another thing I really love about Hatay is the food. What I especially look for in Hatay is 'ezme'. My wife is actually working on making 'ezme,' but we are not there yet." During their Hatay trip, the ambassadors visited various historical sites and tried Hatay's rich cuisine such as famous dessert kunafah that is made by mixing special salt-free cheese into shredded dough and frying the mixture in butter.

The Austrian envoy said she enjoyed the delicious food in Hatay and added that it was also special for her to see the first Christian church, Saint Pierre in Hatay.