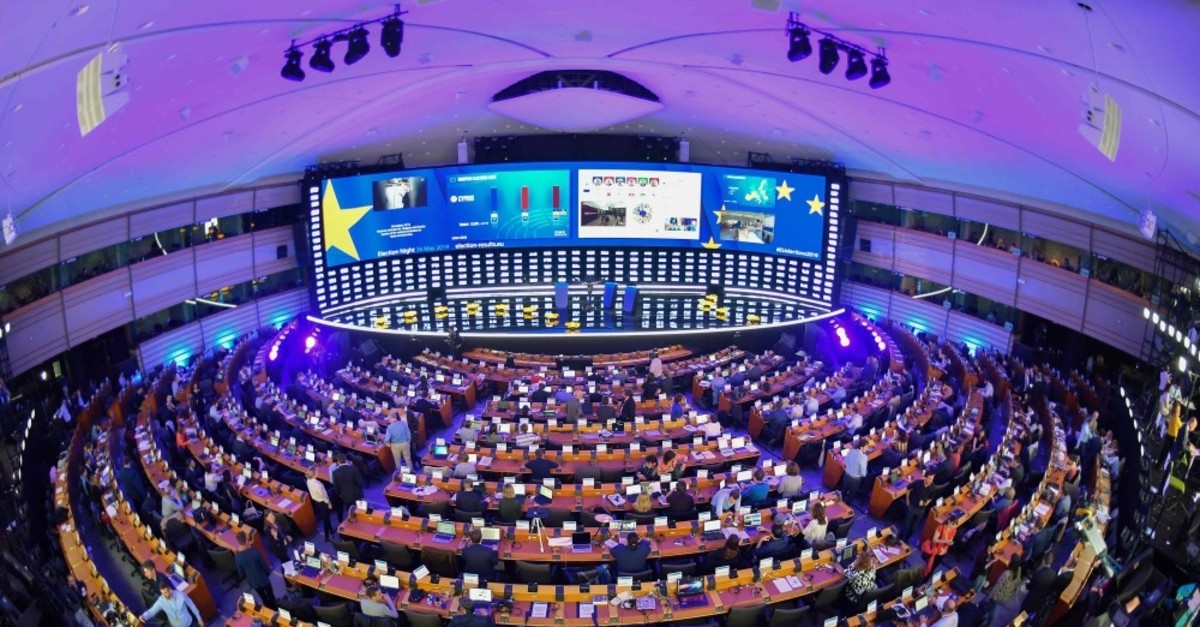 An inside view of the European Parliament Hemicycle where journalists are following the European elections results, Brussels, May 26, 2019.
by Eralp Yarar May 28, 2019 12:04 am

In an unfortunate night for traditional centrist political parties in Europe, anti-establishment parties, including far-right populists and the Greens, managed to increase their efficiency and power in the European Parliament and EU politics on Sunday. However, the results were not only unfortunate for the traditional parties but also Turkey, as the empowerment of the far-right may lead to negative developments for the country's relations with the EU and accession process, experts said. Some 50.95% of nearly 427 million voters across Europe went to the polls to cast their votes in the European Parliament elections, held in 28 member countries between the dates of May 23-26.

In Italy, the far-right League took 33.6% of popular votes, while France's far-right National Rally took 23.5% to lead the polls in their respective countries.

Underlining these developments Seydanlıoğlu said a strengthening far-right in the European Parliament would have a negative impact on Turkey-EU relations as these parties would adopt a more hard-line approach.

Far-right political parties and groups are known for their hostility toward migration, multiculturalism and European integration. They are also hard opponents of Turkey's possible EU membership. Many believe that Turkey's membership application has been stalled for years due to its cultural and religious identity. During the period since Turkey applied for full membership, many countries from Eastern Europe with major democratic flaws have been accepted into the union. Also, the recent "democratic recession" in many EU member countries triggers questions about the union's principles and values.

"I guess that some marginal parties will be less marginal tonight," said Jean-Claude Juncker, the outgoing president of the European Commission, as he cast his vote in Luxembourg, where he was prime minister for 18 years.

Speaking to Anadolu Agency (AA), Nurşin Ateşoğlu Güney said that the rise of the far-right in Europe is reflected in the European Parliament elections. The respected academic also added that it would be unrealistic to expect the parliament to act in favor of Turkey anymore, especially considering its traditional anti-Turkish stance.

Güney also stated that the election results prove that mainstream parties in Europe have suffered heavily and this trend threatens the basic principles of the EU and multiculturalism on the continent.

On the other hand, two political groups related with far-right and nationalist ideologies, namely the ENF and EFDD, gained 112 seats out of 751 seats. These numbers show that far-right ideologies have been rising regularly in Europe since the late 1990s and have reached their peak in these latest elections.

Combining populist and far-right parties from countries including France and Italy, the Europe of Nations and Freedom Group increased their seats from 40 to 58 in the parliament.

Another euroskeptic populist group, Europe of Freedom and Direct Democracy, home of the Brexit Party, secured 56 seats with an increase of eight seats compared to the 2014 elections.

Speaking in Milan, Salvini said: "A new Europe is born. I am proud that the League is participating in this new European renaissance."

The Brexit Party is one of the two largest parties in the parliament with Angela Merkel's center-right CDU/CSU alliance. Both have 29 seats, according to the unofficial results.

In the Brexit referendum campaign, the group campaigning to leave the EU used anti-Turkish slogans to win xenophobic votes. The "leave" campaign absurdly argued that if the U.K. remained a member state and in the case of Turkey's membership in the bloc, "That 80 million Turks would come to the U.K." It was a misleading slogan that went unchallenged by the campaign and advertisement watchdogs in the U.K.

While Salvini's far-right League has 28 seats, Marine Le Pen's National Rally has 22 seats. If they can unite their parties under the roof a bigger far-right alliance, they would radically increase their efficiency in the parliament and EU politics. In April, Salvini hosted members of European nationalist and far-right parties in Milan to discuss forming a broad political alliance within the European Parliament. Addressing the issue of Turkey's accession to the European Union, Salvini said talks with Turkey, which have been suspended, should be canceled. Salvini said that he believes Turkey would be an Islamic influence in Europe and that the country is too different culturally. Salvini also pledged that they will cancel the accession process of Turkey to the EU if the new group wins a majority in the European Parliament. "The EU chooses to pursue sanctions against Hungary and Poland while giving billions [of euros] to Turkey. The path to accession should not be suspended, but instead definitively cancelled," Salvini said.

Valeria Giannotta, an academic expert in Turkish politics and international relations, also pointed to Salvini's speeches and discourse that targeted Turkey's accession process to the EU and said Salvini and other far-right leaders have a clear stance against Turkey.

In his early speeches, Salvini said Turkey "has nothing to do with Europe," underlining Turkey's cultural differences. According to Giannotta, this type of discourse underlines the identity-based attitude of the EU and its origins based on Christianity.

Analyzing the possible impact of the rising representation of the far-right in the European Parliament, she said it will change the rhetoric and added: "The rhetoric will be more extreme against Turkey and Muslim countries."

Meanwhile, Merkel's center-right CDU/CSU alliance led the polls taking 28.7% of votes in Germany. However, this so-called victory represents a defeat for center-right in Germany because their vote share is 8% less than they received in the 2014 elections.

The Greens have become the ultimate winner of this election in Germany, taking more than 20% of votes by almost doubling their vote share compared to 2014.

Seydanlıoğlu said the success of the Greens in Germany can also be perceived as a negative development for Turkey.

Also, traditional mainstream parties' loss of votes in Germany will transform these parties' discourse to a position closer to far-right ideologies, commented Seydanlıoğlu and added that this trend can result in Turkey's disfavor. "The anti-refugee movement can go through an institutionalization trend step by step all across Europe and the Turkish diaspora living in Europe can be negatively affected," Seydanlıoğlu added.