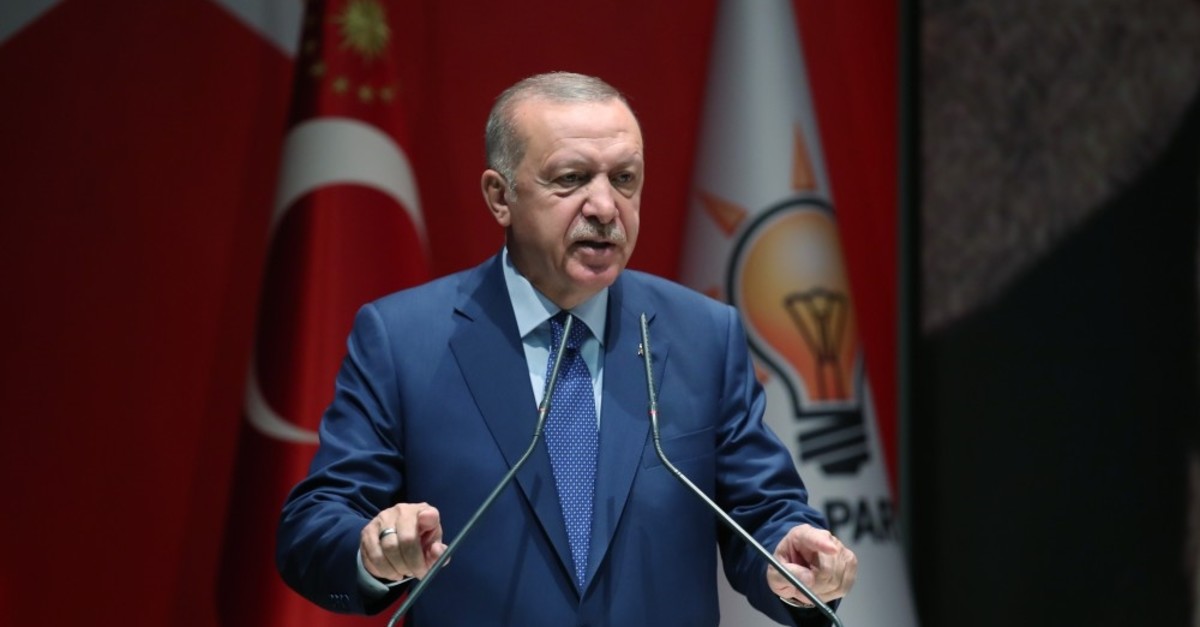 In case of a failure in the safe zone plan, Ankara may have to let refugees cross into Europe to get the support that has not been provided so far to share the burden, President Recep Tayyip Erdoğan said Thursday

Turkey warned the international community Thursday over the upcoming outcomes of a possible failure in the safe zone plan in northern Syria, saying that it would be forced to open its doors to Europe for refugees to enter. "We may have to let them [the refugees] cross into Europe to get support," President Recep Tayyip Erdoğan said yesterday, underlining the country's disappointment over the Western world's lack of interest in backing both the safe zone project and lifting the burden of the refugees. Speaking at a meeting of provincial heads of the Justice and Development Party (AK Party) in Ankara, Erdoğan said that Turkey aims to settle at least 1 million of the Syrians it took in since 2011 in its planned safe zone along the country's border with Syria.

"We haven't been able to receive the support from the world, particularly the EU, when it comes to sharing the burden of the refugees that we host. To receive [support], we might have to do this [opening the gates]," the president said. Ankara and Brussels signed an agreement in 2016 to find a solution to the influx of refugees heading to the union. According to the deal, Turkey was promised 6 billion euros ($6.63 billion) in financial aid, which was initially designed to be given to the country in two stages and be used by the Turkish government to finance projects for Syrian refugees. Visa freedom for Turkish citizens was also to be provided under the agreement. Finally, the customs union was to be updated in accordance with the deal. For its part, Turkey took the responsibility of discouraging irregular migration through the Aegean Sea by taking stricter measures against human traffickers and improving the conditions of more than 3 million Syrians living in Turkey.

Determined to solve the issue no matter what, on Aug. 7, Turkey agreed with U.S. military officials to set up a safe zone and develop a "peace corridor" running from the Euphrates River to the Iraqi border to facilitate the return of displaced Syrians currently living in Turkey to their home country and provide security for Turkish border settlements and military outposts. They also agreed to establish a joint operations center. However, while the process for the safe zone has been launched, the U.S. still continues logistical and training support to the PKK's Syrian affiliate, the People's Protection Units (YPG), making Turkey cautious to put its trust in the country when it comes to establishing a safe zone.

"We want to build houses in a width of 30 kilometers in northern Syria. This way, we will provide a humanitarian way of living to them [the refugees]," he added, demanding logistical support from the international community.

"If you'll support us, then support us. If you won't, then sorry about that," Erdoğan said.

Ankara to apply its own action plan at end of September

The president added that Turkey would start to apply its own plan of action by the end of September to establish a safe zone in northern Syria.

"Turkey is determined to actively form a safe zone in Syria along the eastern line of the Euphrates River in its own way by the last week of September," the president said.

Erdoğan on Wednesday said that in three weeks, on the sidelines of the U.N. General Assembly session, Turkey would make its final effort to find a compromise with the U.S. on creating a safe zone along the eastern shore of the Euphrates.

Previously, speaking on the establishment of a joint operation center in the border district of Akçakale to facilitate the safe zone process and to monitor the retrieval of weapons given to the PKK-affiliated YPG by the U.S., Defense Minister Hulusi Akar said Turkey has a plan B and a plan C ready in case Washington backtracks on its promises.

Turkey had long signaled a possible offensive in areas held by the YPG east of the Euphrates. However, last December the government decided to postpone the operation after U.S. President Donald Trump decided that Washington would withdraw its troops from Syria. The withdrawal decision was quickly interpreted as the U.S. intending to halt support for the YPG, which Turkey sees as a terrorist organization.

While Turkey has been working on its own safe zone initiative, it was reported yesterday that YPG terrorists have been digging ditches across the border in Ras al-Ayn province, in case of an operation by Turkey east of the Euphrates. The terrorist organization is also reportedly recruiting civilians, as part of is preparations against Turkey's offensive.

Erdoğan also said that, until now, the number of refugees that have returned to the liberated, safe areas of northern Syria has reached 350,000.

Since 2016, Turkey has conducted two major military operations in northwestern Syria, Operations Euphrates Shield and Olive Branch, to purge the region of terrorist groups, most notably the YPG. As a result of the operations, hundreds of thousands of refugees have been able to return to the areas.

Meanwhile, on Wednesday, Presidential Spokesperson İbrahim Kalın had a phone call with U.S. National Security Adviser John Bolton. They discussed a series of issues, including the latest developments in Syria and the proposed safe zone, as well as bilateral and trade ties.

Diplomatic sources said Kalın informed Bolton that the Turkish side completed preparations for the Turkish-U.S. joint operation plan without delay.