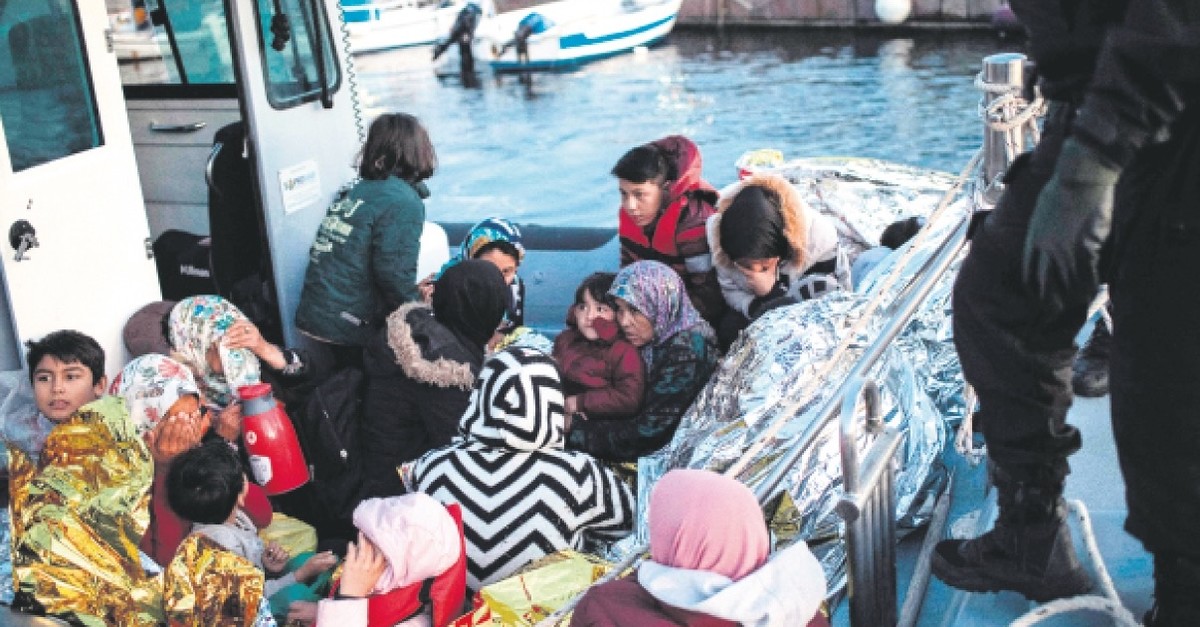 Migrants are seen on board a Greek Coast Guard rescue boat at the port of Skala Sikamias following a rescue operation by a Frontex patrol vessel, on the island of Lesbos, Sept. 29, 2019.
by Daily Sabah with AA Sep 30, 2019 12:11 am

As the threat of a new refugee flow from northwestern Syria increases, Greece and Luxembourg urged the European Union to increase the levels of support to the Syrian refugees in Turkey in order to protect the continent from the movement of migration.

Luxembourg's foreign minister called on the EU on Saturday to provide further financial assistance to Turkey to support projects for Syrian refugees in the country.

Jean Asselborn told German daily Neue Osnabrucker Zeitung that Turkey has been shouldering an enormous burden by hosting nearly 4 million Syrian refugees since the eruption of the civil war in Syria in 2011.

"It seems evident to me that it [Turkey] needs assistance for this. Therefore, the EU must ensure additional financial assistance to help Syrian refugees in Turkey," he stressed, adding that the EU's financial assistance would be used for various projects, such as basic health care and providing education to refugee children.

Ankara and Brussels signed an agreement in 2016 to find a solution to the influx of refugees heading to the union. According to the deal, Turkey was promised a total of 6 billion euros ($6.6 billion) in financial aid, which was initially designed to be given to the country in two stages to be used by the Turkish government to finance projects for Syrian refugees. Visa-free travel for Turkish citizens was also promised in the agreement. Lastly, the customs union was also to be updated in accordance with the deal. In exchange for these promises, Turkey took the responsibility of discouraging irregular migration through the Aegean Sea by taking stricter measures against human traffickers and improving the conditions of the approximately 4 million Syrians living in Turkey.

Although the first stage of the funding was provided to Turkey based on the commission's progress report on migration, the EU failed to provide the rest of the funding and did not fulfill its other promises within the given time frames. Likewise, negotiations for updating the customs union have yet to start, despite the deal stating they must be done by the end of 2016.

Greece's Migration Minister Giorgos Koumoutsakos also said on Friday that in order to prevent a new migration flow to the EU, assistance to Turkey regarding the refugees should be increased.

"I think that the EU should positively consider the possibility of new funding to Turkey. Of course, this will not be unconditional but it should be seriously and positively considered," Koumoutsakos said, calling on the European Commission which is expected to begin active duty on Oct. 1 to take action on the issue. He also said that he believes if the EU takes further steps toward Turkey, it would be welcomed by Turkey with similar steps.

Turkey has been hosting the largest number of refugees worldwide for the fifth consecutive year with almost 4 million people, most of them refugees that fled from the Syrian civil war. The war has left hundreds of thousands displaced, injured or even dead.

EU countries have been discussing this issue for two years; however, no concrete steps have been taken. Turkish politicians and officials frequently warn the international community that a further humanitarian disaster could take place with the ongoing war and that a sustainable solution has to be found for the new refugees as well as those already living in bad conditions.

"It depends very much on how the Turkish side would react to this, but the more the better: I mean if you have a robust presence with an assertive mandate, this would definitely produce better results than the ones we have right now," he said.

His remarks came following a tragic incident in Greek island of Inousses when a boat of refugees sunk, killing seven, five of whom were children.

So far 12 people have been rescued, including four children, five men and three women.

An extensive search and rescue operation has been launched, while more vessels were heading to the same area to assist in the efforts, the Greece-based state news agency ANA-MPA reported.

Authorities have not provided details of the nationalities of the victims.

Several coast guard vessels and an aircraft operated by the European border agency Frontex and a Hellenic Air Force helicopter were also present in the area, searching for missing people.