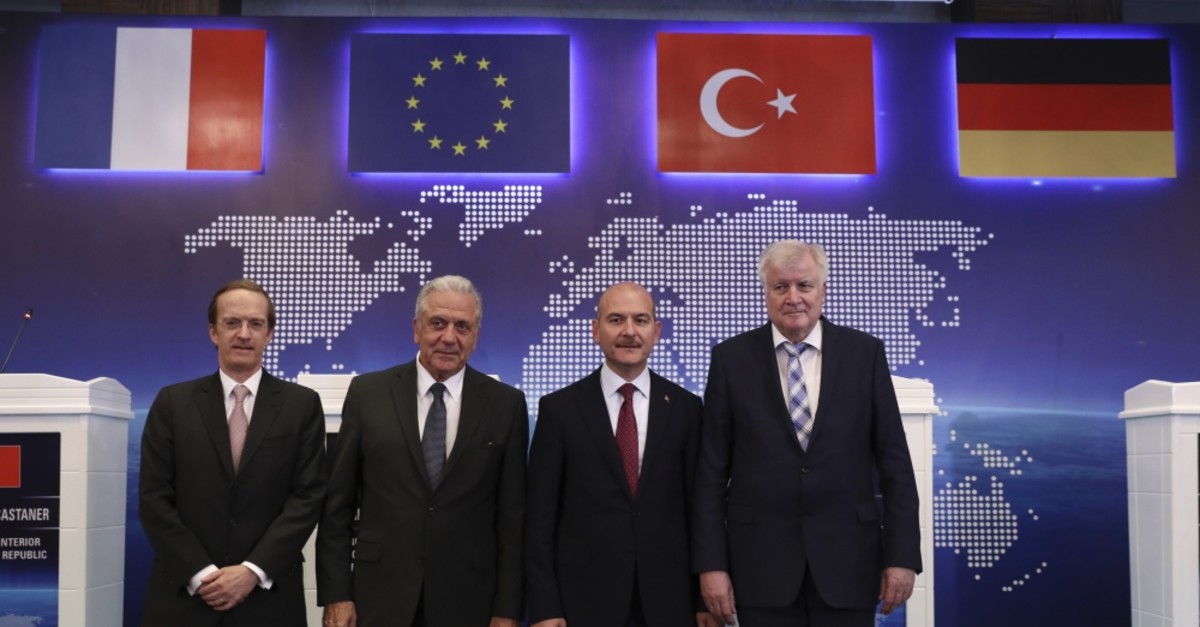 After meeting with EU officials, Ankara reiterated its expectation from the union to keep its promises regarding the refugee deal

Ankara expects the EU to fulfill its responsibilities in the migrant deal to facilitate better relations between Turkey and the bloc, as various EU officials pay visits to the country to discuss the issue. Officials from Europe came together with Turkish officials in a two-day visit to smooth over recent tensions with Ankara over migrants. After German Interior Minister Horst Seehofer and EU Migration Commissioner Dimitris Avramopoulos met on Thursday with Turkish Interior Minister Süleyman Soylu, the German Minister came together with Turkish Foreign Minister Mevlüt Çavuşoğlu and Vice President Fuat Oktay in Ankara on Friday. The main topics on the diplomats' agenda are the EU-Turkey agreement and the Syrian refugee issue.

Speaking on the 2016 the migrant deal, Çavuşoğlu called on EU to help people living in northwestern Syria's Idlib on Friday and said "We saw that the EU wants healthier relations with Turkey, however, promises have to be kept." During the meeting, steps that have to be taken on the issue in the upcoming years were negotiated.

Ankara and Brussels signed an agreement in March 2016 to find a solution to the influx of refugees heading to the union. According to the deal, Turkey was promised a total of 6 billion euros in financial aid, which was initially designed to be given to the country in two stages and be used by the Turkish government to finance projects for Syrian refugees. In response to this, Turkey took the responsibility of discouraging irregular migration through the Aegean Sea by taking stricter measures against human traffickers and improving the conditions of more than 3 million Syrians living in Turkey.

Although the first stage of the funding was provided to Turkey, the EU has yet to fulfill other articles such as the visa-free deal for Turkish citizens and updating the customs union. Turkey currently hosts some 3.6 million Syrian refugees, more than any other country in the world. Ankara has so far spent $40 billion on the refugees, according to official figures.

Seehofer is expected to leave for Greece later on Friday. He said on Thursday that he would address Ankara's concerns in Brussels in his talks with the incoming head of the European Commission, Ursula von der Leyen.

'Turkey-EU agreement must be preserved'

Greece's EU Commission member Margaritis Schinas, who was nominated to undertake the migration issue in the commission, underlined that the Turkey-EU agreement has to be preserved and reviewed positively.

Stressing that Turkey is hosting more than 3 million refugees, Schinas emphasized that the number constitutes a great burden, adding that Greece also has to take some steps.

Meanwhile, the Greek Ministry of Citizens Protection announced on Thursday that Greece, Bulgaria and the Greek Cypriot administration's plan on launching a Migration Route Initiative (EMMI) with the aim of preventing irregular migration flows. "It will be the first joint initiative of the front-line member-states," the statement said.

The initiative will be presented at the European Union's Justice and Home Affairs Council on Oct. 7, in Luxembourg.

The three countries said that they advocate Turkey's efforts to implement articles of the EU-Turkey Joint Statement, ensuring the effective return of migrants and eradicating migrant trafficking networks.

"In this context, the three countries encourage the EU and the member states to consider allocating more resources to countries in the wider Eastern Mediterranean region, on the basis of mutually agreed commitments," said the statement.

Earlier this week, migrants in the Moria refugee camp on the Greek island of Lesbos in the Aegean Sea protested appalling living conditions and set fires on Sunday, causing the death of a woman and a child. Following these e

vents, an emergency cabinet meeting organized by Greece's new center-right government decided to return 10,000 refugees to Turkey by the end of 2020.

A total of 72,263 irregular migrants and refugees reached Europe by sea in the first nine months of 2019, the U.N. migration agency said Friday.

According to a report issued by the International Organization for Migration (IOM), 1,041 of them died at sea.

During the same period last year, nearly 84,345 refugees and migrants were able to reach Europe via the Mediterranean Sea, while 1,890 of them drowned at sea.

This year, 39,155 irregular migrants and refugees arrived in Greece, more than half of total arrivals.

"Those arrivals, through nine months of 2019, are more than two of the last six years," said the report.

On the Eastern Mediterranean route, the number of deaths has reportedly reached 66 in 2019.

On the western route, Spain received 17,405 irregular migrants and refugees.

The number of deaths reported on the Western Mediterranean route was 315 this year, compared to 511 in 2018.

Malta received over 2,800 refugees and migrants this year, spiking from the same period last year, which saw 714 arrivals.

Deaths in the Central Mediterranean route decreased to 660 in 2019, compared to 1,261 in the same period last year.

The IOM stated that at least 18,960 victims lost their lives in Mediterranean crossings since 2014.