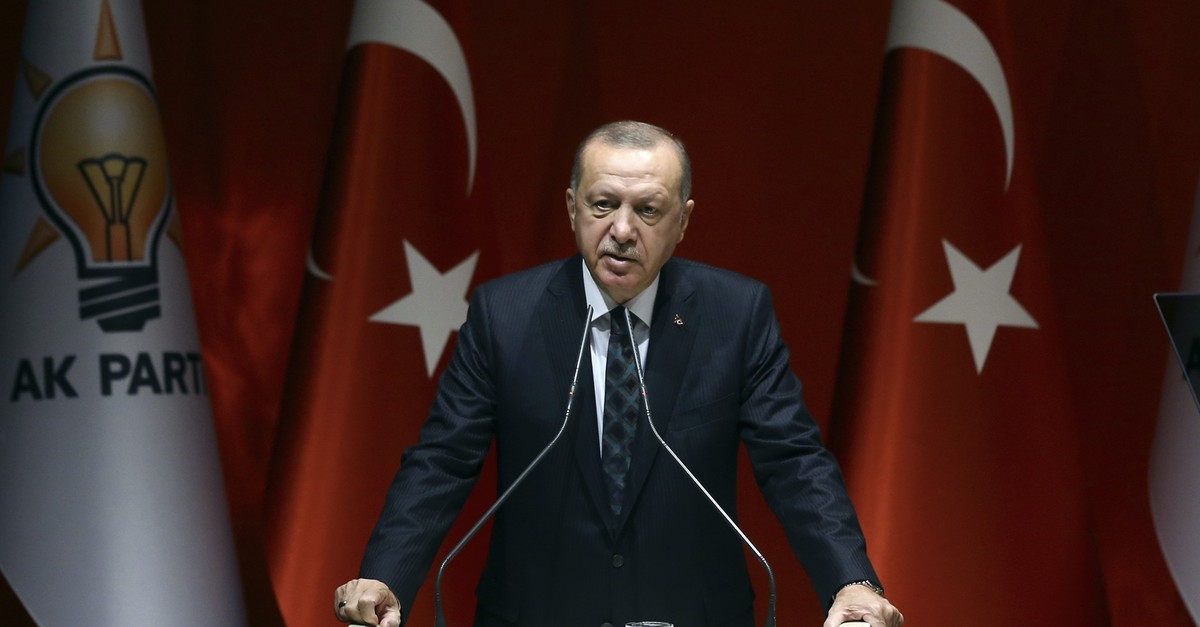 President Erdoğan said Turkey will open its borders and send 3.6 million refugees across if European countries frame the anti-terror operation as an invasion

Ankara would allow millions of refugees to head to Europe if the bloc insists on its baseless criticisms against Turkey's military operation in northern Syria, President Recep Tayyip Erdoğan warned the EU Thursday. "If you try to frame our operation there as an invasion, our task is simple: we will open the doors and send 3.6 million migrants to you," Erdoğan said, speaking at the ruling Justice and Development Party's (AK Party) provincial heads meeting in the capital Ankara. Addressing the EU, Erdoğan said the bloc has never been sincere and added: "Now they say they will withhold 3 billion euros from us. Have you kept any promise you gave us so far? No." Ankara and Brussels signed an agreement in March 2016 to find a solution to the influx of refugees heading to the union.

According to the deal, Turkey was promised a total of 6 billion euros ($6.6 billion) in financial aid, which was initially designed to be given to the country in two stages and be used by the Turkish government to finance projects for Syrian refugees. In response to this, Turkey took the responsibility of discouraging irregular migration through the Aegean Sea by taking stricter measures against human traffickers and improving the conditions of more than 3 million Syrians living in Turkey. Although the EU had pledged 6 billion euros in aid to improve living conditions of Syrian refugees in Turkey, only 2.22 billion euros were disbursed as of this June, according to Turkey. Also, the EU has yet to fulfill other articles such as the visa-free travel deal for Turkish citizens and updating the customs union. Turkey currently hosts some 3.6 million Syrian refugees, more than any other country in the world. Ankara has so far spent $40 billion on the refugees, according to official figures.

Being a key transit point for irregular migrants aiming to cross into Europe to start new lives, especially those fleeing war and persecution, Turkey recently reiterated its warnings for European countries about a possible new migration crisis and called on them to take action by sharing the burden of responsibilities.

One aim of the military operation is to establish a "safe zone" in which at least 1 million Syrian refugees can be repatriated, after the long-term presence of refugees became an increasingly political liability.

"For those who want to return to their country but don't have a home left anymore, we plan to build settlements for 1 million people with international financing," Erdoğan said.

"Those that need to be kept in jail, we will keep in jail. We will return foreigners to their home countries if they accept them back," he said.

Erdoğan also stated that 109 terrorists were killed so far in the operation, which would soon cover ground from Manbij in northern Syria to the Iraqi border some 350 kilometers east.

"God willing, we will crush these snakes' heads quickly," he said.

"What we are trying to do is prevent the establishment of a terrorist state on our southern border. This cannot happen," he added.

Erdoğan also harshly criticized Saudi Arabia and others for opposing Turkey's operation: "I urge Saudi Arabia to look in the mirror and answer for what it has done to Yemen," Erdoğan said.

"And Egypt [referring to Abdel-Fattah el-Sissi], you can't say a thing. You allowed democratically elected [Mohammed] Morsi to die suffering in a courtroom," the president said, noting that the country did not even allow Morsi's family to attend his funeral. "That's the sort of killer you are," he said.

Turkey's operation received unfair, negative reactions from many countries, including France, Germany and the Netherlands. However, these reactions do not match international law and resolutions that members of the international system have agreed on.

From the onset of the Syrian conflict, Turkey has pursued a policy aiming at an end to the bloodshed, preservation of the territorial integrity and unity of Syria, and a political transformation process that will reflect the legitimate demands of the Syrian people. On one hand, Turkey tends the wounds of those who flee the violence committed by Daesh and the YPG, while on the other hand working with the international community for a political resolution to the crisis.

The Turkish Armed Forces (TSK) has targeted Daesh elements within Syria from July 24, 2015 onward, based on the right to legitimate self-defense recognized by Article 51 of the U.N. Charter. The TSK is the only NATO army fighting Daesh directly. Turkey's resolve to end the terrorist threat along its borders was demonstrated by Operation Euphrates Shield launched on Aug. 24, 2016 and Operation Olive Branch on Jan. 20, 2018.

As a responsible member of the international community, Turkey is determined to fight all kinds of terrorism. Unfortunately, the weapons provided by the U.S. for anti-Daesh purposes in Syria end up in the hands of the PKK within its borders. The YPG, falsely declared to be a reliable force against Daesh, continues to commit atrocities against the people of the region and has exiled over 300,000 Syrian Kurds who oppose its rule.

"So many people starved to death in their siege. On what grounds do they defame Turkey and oppose Turkey's operation in northern Syria?" said Çavuşoğlu, speaking to reporters.

"They killed so many people in Yemen and made them starve," he added.

Saudi Arabia accuses Iran of arming the Houthi rebels, who overran much of Yemen in 2014, including the capital Sanaa.

In 2015, Saudi Arabia and its Sunni Arab allies launched a massive air campaign aimed at rolling back Houthi gains in Yemen and supporting the country's pro-Saudi government.

Another attack came from U.S. Sen. Lindsey Graham who on Wednesday criticized Turkey for launching the much-anticipated operation, saying Ankara did not "have a green light to enter into northern Syria."

"There is massive bipartisan opposition in Congress, which you should see as a red line you should not cross," he said.

Altun responded by reminding the senator of Turkey's urgent security needs that necessitated the operation against Daesh and the YPG terror groups operating along its southern border.

"I heard that we may have ran a red light. It was an emergency. We were in a rush to unleash hell on PKK and ISIS [Daesh] terrorists, who threatened our citizens," Altun said.

"This gentleman [Graham] is not an honest man. Because he demanded to meet with me in the U.N. summit, and we have met. In these meetings, I got an impression. I even met with him in the Presidential Complex when he came to Turkey. I told him that our struggle is against the YPG," the president said.

Israeli Prime Minister Benjamin Netanyahu yesterday tweeted, "Israel strongly condemns the Turkish invasion of the Kurdish areas in Syria and warns against the ethnic cleansing of the Kurds by Turkey and its proxies."

In a reply to the tweet, Altun slammed Netanyahu's baseless claims and said, "Empty words of a disgraced politician looking at many years in prison on bribery, fraud and breach of trust charges. The Syrian Kurds, including the 300,000 exiles in Turkey, are under Turkish protection. We will eliminate all terrorists in the area and help Syrians return home."

In addition to negative comments, there are also messages that support Turkey's operation in northern Syria.

Trump criticized his predecessor Wednesday for what he said was the overt choice to partner with the PKK terror group as Turkey begins Operation Peace Spring in northern Syria.

"When President [Barack] Obama took the PKK, when they bring in the PKK, that's a tough deal because that's been a mortal enemy of Turkey," Trump told reporters at the White House. "So when you bring them in into a partnership, it's a tough situation. It's tough for Turkey."

Trump announced Sunday a pullback of U.S. forces from their positions in northern Syria ahead of Turkey's operation, saying Washington would not be engaged in the campaign and "will no longer be in the immediate area."

Trump also said Wednesday that millions of Syrian refugees would be scattered around the world if Turkey was not hosting them.

Speaking at a press conference at the White House, Trump said Erdoğan wanted to repatriate the refugees.

"Right now, he's holding, in all fairness to him, he's holding millions of people that would be all over the place if he wasn't holding them," said Trump. "So he wants to repatriate, he wants to have them go back into the area that he's looking at."

Russia understands Turkey's concerns over its border security, Russian Foreign Minister Sergey Lavrov said yesterday. "Since the start of Syrian crisis, we emphasize that we understand Turkey's concerns over its border security," Lavrov told reporters on the sidelines of the meeting of the Commonwealth of Independent States (CIS) Foreign Ministers in Ashgabat, Turkmenistan.

Lavrov said Russia also emphasized that these concerns would be eased within the framework of the agreement that was signed between Turkey and Syria in 1998, known as the Adana agreement.

Signed in Turkey's southern city of Adana, the agreement is aimed at easing Ankara's concerns regarding the PKK terrorist group.

"Turkey's operation in northeastern Syria is a result of steps taken by the U.S. in this region," Lavrov said.

He added that Russia warned the U.S. of "not playing a Kurdish card" while making Kurdish and Arab tribes to come face to face.

"The PKK and its extensions in Syria dragged not only Kurds but all sections in the region into a disaster," the statement said.

"To reach a safe zone, which was a national demand of the Syrian revolution, and to get rid of the terrorist organizations in the region, we declare our support to Operation Peace Spring," it added.

The group also called on people in the region to stay away from military zones and not to leave their homes. The Turkish Jewish Community also announced its support to the operation.