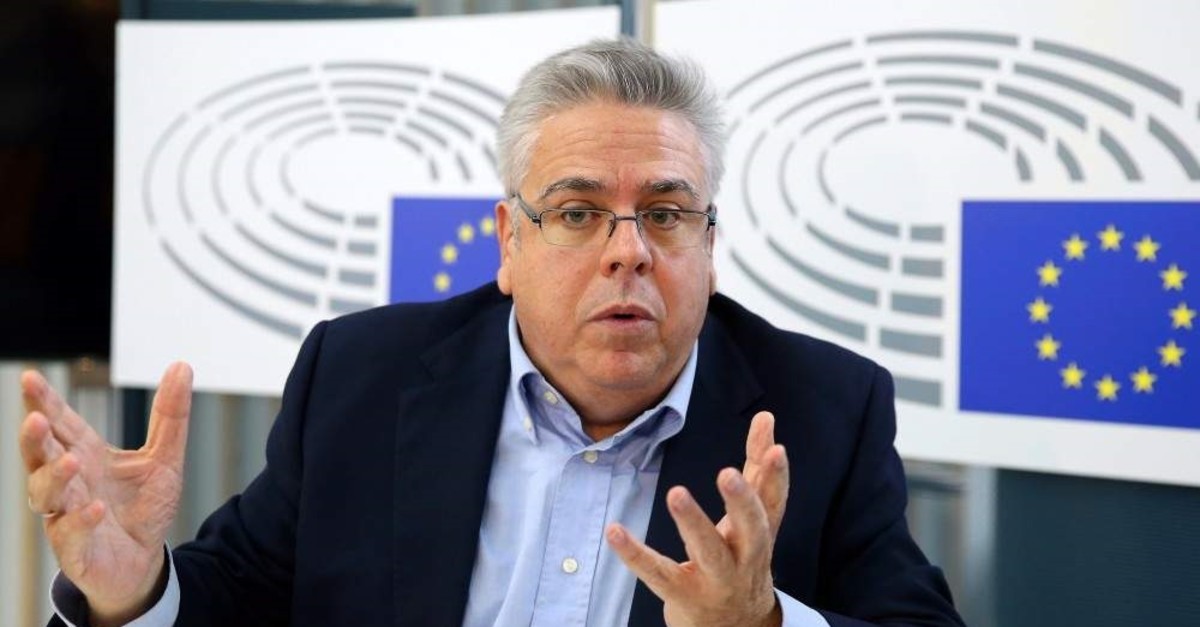 EU's newly appointed Turkey rapporteur Nacho Sanchez Amor speaks in an interview on Tuesday, Nov. 5, 2019 (AA Photo)
by Associated Press Nov 05, 2019 4:36 pm
Turkey and the European Union need to focus on confidence building measures to boost relations, European Parliament's (EP) newly appointed Turkey rapporteur Nacho Sanchez Amor said, as he expressed his goal to enhance EU-Turkey relations.
“I want to fulfill my duties in an objective and comprehensive manner. I want to meet with all sides involved in Turkey-EU relations,” Amor told an exclusive interview with the Anadolu Agency, adding that both the bloc and Turkey should act in a target-oriented manner.
The newly appointed rapporteur suggested that they should figure out in which fields advancements could be made and which fields are deadlocked.
“I want to fully understand Turkey. This is my current agenda. I am aware of Alan Kurdi, baby Muhammed who lost his life [in a YPG terror attack] in Akçakale, the mothers who are opposing PKK’s kidnapping of their children, the people who criticize the government on social media and the journalists,” Amor said, adding that he will only be able to make sense of everything and put relations back on track through seeing the big picture.
He noted that although various developments have put a strain on EU-Turkey relations, he wants to start a new page.
“We need to review the current situation to start a new period.”
Regarding Turkey’s Operation Peace Spring, Amor said the EU acknowledges Turkey’s legitimate security concerns, but is against a unilateral operation.
He claimed that the steps taken by Turkey to alleviate its legitimate security concerns “contradicts” 51st article of the U.N. In response to a question about if the rockets launched by the PKK’s Syrian offshoot the People’s Protection Units (YPG) targeting civilians in southeastern Turkey amounted to an attack, Amor said he’s against all sorts of attacks against civilians.
“I do not defend a single side, and criticize all types of attacks targeting civilians,” Amor said.
Amor also said that the EU as a bloc did not condemn the recent terrorist attack in Syria’s Tal Abyad because the bloc is not the “authority” to determine who carried out the attack, although Turkish officials have announced that YPG terrorists were behind it.
The rapporteur also highlighted Turkey’s significance as a partner, which accepted refugees with open arms.
“What Turkey has done regarding refugees reflects European values,” he said and added: “The EU has always applauded Turkey’s efforts in this regard.”
Amor also noted that Turkey is entitled to request more funding from the EU for the refugees, considering the amount of burden it is undertaking.
He said he is planning to make his first official visit to Turkey in January.
Amor replaced Kati Piri last month after Commission of the EU Parliament approved his nomination.
Elected to the European Parliament in 2019, Amor is a member of the Spanish Socialist Workers' Party.
His predecessor Piri had previously said that the PKK is not a threat to the EU despite the fact that it has been proscribed as a terrorist organization by Turkey, the U.S. and the EU.
In its more than 30-year terror campaign against Turkey, the terrorist organization has been responsible for the deaths of 40,000 people, including women, children and infants.
Last Update: Dec 20, 2019 1:28 am
RELATED TOPICS