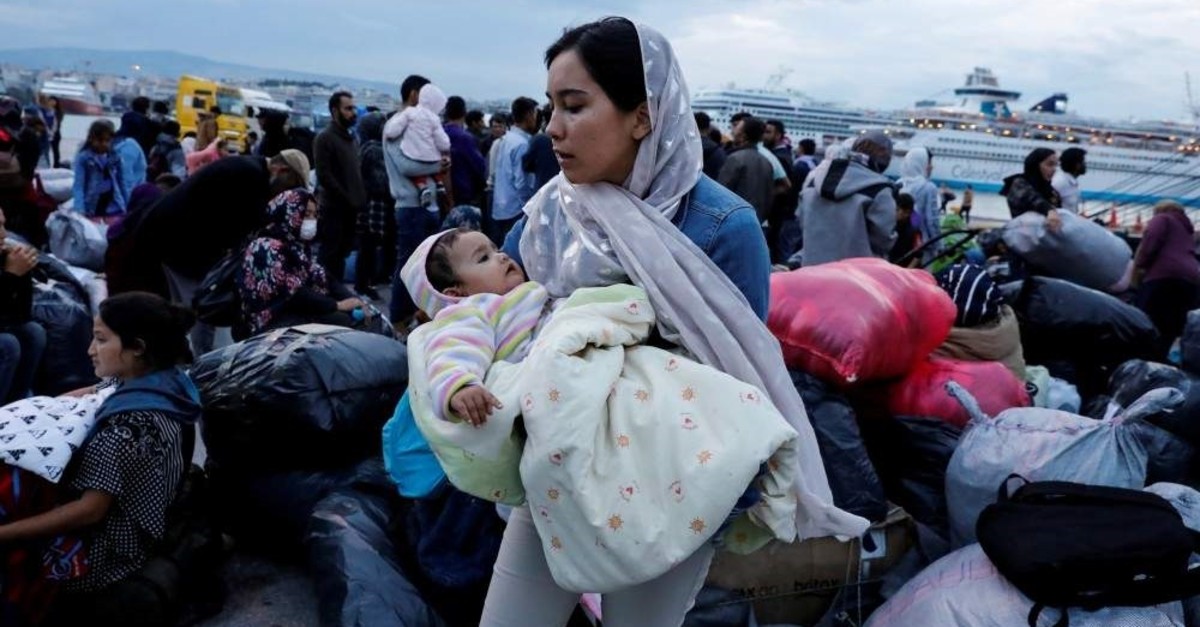 Refusing to face its responsibilities in the refugee crisis, Greece continues to mistreat refugees crossing its borders, forcing pushed back migrants to seek protection in Turkey

“I have been beaten to death,” said a migrant who recently took refuge in Turkey after being mistreated and pushed back by Greece, expressing her gratitude to Turkish authorities. These remarks of Behiye S. echo the voices of hundreds of others as Greece’s brutal actions against refugees that reach their coasts continue to make headlines and the beaten and pushed back migrants seek safety in Turkey.

Losing her whole family in Syria’s northwestern Azaz province, Behiye illegally crossed into Greece to reach her only remaining family member, an uncle. However, when she entered the country, she saw the cruel face of the Greek authorities as they welcomed her with beatings and confiscated her belongings and money.

“I came from Syria. My family was killed in an attack that dropped a bomb on our crop field. I was left alone. I came to Greece, but they captured us and beat us almost to death,” she said, remembering the brutalities she faced.

“Then, they sent me to Turkey. Thank God for the Turkish soldiers; they have helped me,” Behiye said.

Behiye recalled other details of Greek authorities’ actions, saying they made her eat Turkish money and then threw her into the Meriç river to force her to go back to Turkey.

“On the Turkish side, a man helped me and saved me from drowning. In Greece, I had to spend a day in prison. They not only did not give us any food but also took away the food that we already had with us,” she said.

After facing so much trauma in just a few days, Behiye’s only desire now is to stay in Turkey and build a life there. Behiye was not alone in her experience.

Another refugee, Muhammed Babir from Pakistan, said Greek police deliberately beat his left foot that he just had an operation on and taunted, “Does it hurt?”

“When I answered ‘yes,’ they kicked me even harder,” he said.

While Turkey has been fulfilling its own part of the 2016 refugee deal, Greece has chosen another route by illegally pushing back migrants. According to Turkey's Interior Ministry, in the first 10 months of 2019, 25,404 irregular migrants were pushed back into Turkey by Greece, a significant increase from the 11,867 migrants pushed back in 2018. Under international laws and conventions, Greece is obliged to register any illegal migrants entering its territory; yet, this is not the case for thousands of migrants who were forcibly returned to Turkey.

Despite Turkey’s efforts, however, there is a growing anti-Turkey stance in the Greek government, especially over the refugee issue. Greek Prime Minister Kyriakos Mitsotakis recently falsely accused Turkey of trying to put pressure on the EU through the migration crisis. Referring to President Recep Tayyip Erdoğan's remarks on opening Turkey's borders unless European countries cooperate to lessen the refugee burden, Misotakis threatened that if Ankara would like to have good neighborly relations, it would not do such a thing.

İsmail Çataklı made the remarks at a conference on migration in Austria where he informed participants about Turkey's efforts related to migration.

"Greece should cooperate (with Turkey) in line with neighborly laws and fulfill its responsibilities instead of ... making baseless and untrue statements with false and insufficient information regarding irregular migration," Çataklı said. He also called on Athens to take responsibility in this "major problem."

The ministry said the number of crossings by irregular migrants into Europe has been reduced by 94% since 2015, when they totaled around 850,000.

"Turkey is hosting more than 4 million externally displaced people. Our Greek counterparts, as well as the international community, should understand that it is not fair for Turkey to solely shoulder the burden of migration, which is a global problem," it said.

Still, Greece continues its slander as the country’s minister responsible from migration affairs stated on Thursday that Turkey should stop “blackmailing” them, ignoring Turkey’s efforts while ruling out their responsibility in the refugee crisis.

Turkey and the European Union signed a deal in 2016 to curb illegal immigration through the dangerous Aegean Sea route from Turkey to Greece. Under the deal, Greece sends back migrants held on the Aegean islands they crossed to from nearby Turkish shores and in return, EU countries receive a number of Syrian migrants legally. The deal, reinforced with an escalated crackdown on human smugglers and more patrols in the Aegean, significantly decreased the number of illegal crossings.

Project to shut refugees in

Meanwhile, Greece is preparing a new project for the refugees, planning to host them on the islands of Samos, Chios and Lesbos, where closed settlements will be built with no allowance for entrance or exit.

The move, announced by Deputy Defense Minister Alkiviadis Stefanis and interpreted by some pundits as too similar to Nazi concentration camps, is planned to host 15,000 refugees. Currently, there are 27,000 refugees staying on those three islands.

These settlements will reportedly replace the existing camps and be used for identity determination, resettlement and extradition. With this new project, which is scheduled to be ready by July 2020, the refugees will not have the right to freedom of movement.

The deputy minister has also said the country intends to transfer 20,000 refugees from the mainland to the islands. Government spokesman Stelios Petsas, on the other hand, said these settlements will basically function as “detention centers” where the refugees denied refugee status by the European Union will be held.